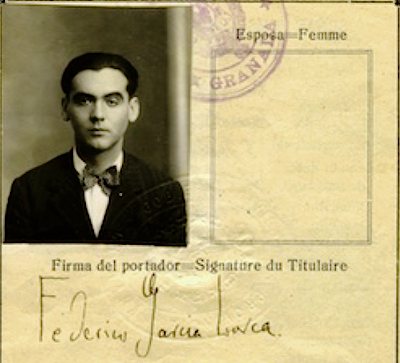 AG: How many know this poem? – Lorca’s “Ode to Walt Whitman”?  One, two, three, four, five, six. seven. Anybody else over there? How many do not? Oh great, great.
I think this is my idea of the greatest poem of the century, or this is my idea of what.. between this and (Guillaume) Apollinaire’s “Zone” (“Zone”, because it was original, it was the first one that invented Surrealist mind, breaking-apart, this, because it took elemental Spanish lyric passionate intensity and mixed it up with Surrealist cut-up, so to speak – the Surrealist idea of putting together opposite things, like “sphincters of dynamos”, “hydrogen jukebox”). At a certain point in Lorca’a life, when he ran into Surrealism (and Salvador Dali, who was a friend of his when he was in New York City, strangely enough), in, I think, the early (19)30’s, visiting New York, he wrote a book called The Poet In New York, (Poeta en Nueva York), which has some of the most amazing poetry of the century. I say this particular poem is the greatest (this, or the lament for a bull-fighter [“Llanto por la muerte de Ignacio Sanchez Mejias”] (Lament for Ignacio Sanchez Mejias)], which is side-by-side with it, and equally long, say, about five pages each) because the mind-jumps between the words are the biggest (that) any poet ever took, that I can think of – at least, in this century – and the melody is the most beautiful. The melodiousness of the language, the passion, the heartache, passion, and drive, of it, is the most terrific. The political and anthropological scope, the view of civilization of this  (the view of civilization from the bottom, the view of the ruin and collapse and falsity of the machine civilization) is among the most penetrating of any poet of the century, the most directly spoken and most brilliantly said, with images that an anthropologist could relate to great mythic American Indian symbols, or Aztec symbols, or Spanish, or Babylonian symbolism.

Actually, I never did quite figure out what he was aiming at in his giant put-down of fairies, because Lorca was shot himself, in (19)35, or (19)36, during the Spanish (Civil) War, according to recent biographers because he had fallen in love with some kid who was the brother of one ofthe right-wing Civil Guard people, and so a death squad came to get him in the middle of the night. Yeah?

Student: Also, in that final image, kind of the juxtaposition of the color of  corn as natural kind of gold..

Student: …as opposed to the other.

Student: It isn’t as if he’s lost everything, though? Because, isn’t he crying about it.. part of Whitman’s  expression of America is an expression of the freedom that it might be..

Student: What does “muchachos” mean…?

AG: Boys, kids. Well, friends – “Come on, muchachos, let’s go get drunk!” – or boys (meaning young boys too), boys, street kids, yeah. Street kids playing baseball under the Queensborough Bridge… And  “the sun sings along the navels” – that’s a really sexy image – the sun was “singing at their navels”- that’s amazing, Surrealist too – sun singing at their navels.. Yeah?

Student: Did he write that in the United States?

AG: He wrote that in New York

AG:He was hanging around Columbia University. His friend was the father of Juan de Onis who is now the Latin American reporter for the New York Times. De Onis were an elegant Spanish family, who ran away from the Spanish Civil War, were exiled (or were radicals, so they couldn’t stay around, I forgot what the story was). And they were bilingual. And they were(he was) teaching at the head of the Spanish Department at Columbia.

Several great poets came to New York during the (19)30’s, at that time. (Vladimir) Mayakovsky visited New York and wrote about the Brooklyn Bridge. And Lorca came to New York, but nobody knew him. Nobody knew who he was. Nobody knew who Lorca was except some of the Spanish community. And he was burning and writing the greatest poetry in the world, actually, the greatest modern-esque Romantic poetry. The Americans and the English had T.S.Eliot at the time, and they had (Ezra) Pound and (William Carlos) Williams, but nobody with that torrential rhetoric and accuracy of rhetoric – “Bull and dream that would join the wheel with the seaweed.” There was nobody. Pound, Williams, Eliot never got to “Bull and dream that would join the wheel with the seaweed.” – Just totally out of its skull, and, at the same time, completely literal on some level. I don’t think you get anything like that in a way till (Jack) Kerouac, and then Kerouac doesn’t have the emotive cadence. Sometimes he gets near it. You know the emotive cadence of Agonia, agonia, suena, fermento y sueno,/ Este es el mundo, amigo, agonia, agonia It’s like someone totally down in the heart talking. Well, I think we’ve come to our time. So (we’ll) continue with more Lorca next (class), and also…

tape (and class) ends here – to be continued

[Audio for the above may be heard here, beginning at approximately eighty-four-and-a-half minutes in and concluding at the end]