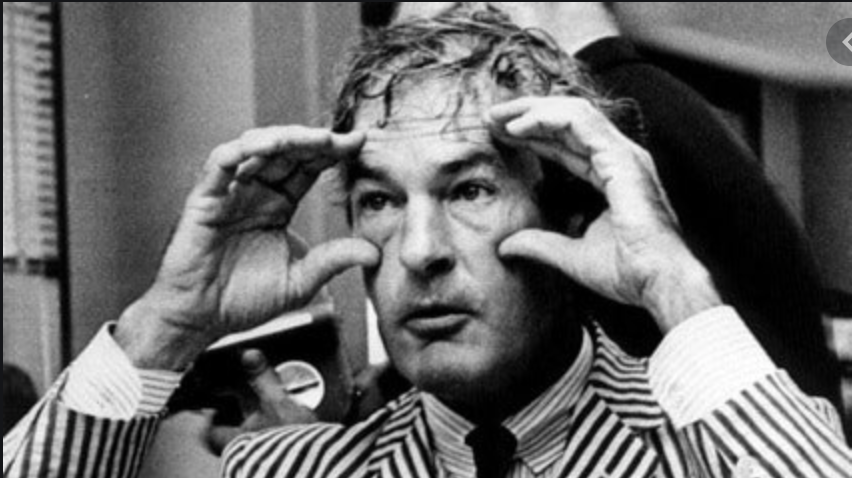 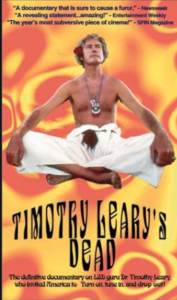 ‘In my book, White Hand Society: The Psychedelic Partnership of Timothy Leary & Allen Ginsberg, I describe the first psychedelic session Allen Ginsberg had with Timothy Leary. It was at Leary’s home at Harvard. November, 1960. Leary had initiated the contact with Ginsberg by sending him a letter of invitation that included the offer of “a token fee of fifty dollars” if the poet was willing to come to Cambridge to discuss his experiences with hallucinogens. That initial letter was followed by an in-person meeting between the two men at Ginsberg’s East Village apartment, and then, finally, the Harvard psilocybin session.

When Allen, Peter Orlovsky, and Lafcadio Orlovsky arrived at Leary’s house, Ginsberg’s glasses were still cracked from an ayahuasca trip he’d taken in Pucallpa, Peru, five months earlier. The experience left a powerful impression. As Ginsberg described it, “…the whole fucking Cosmos broke loose around me, I think the strongest and worst I’ve ever had it nearly… I felt faced by Death, my skull in my beard on pallet on porch rolling back and forth and settling finally as if in reproduction of the last physical move I make before settling into real death—got nauseous, rushed out and began vomiting, all covered with snakes, like a Snake Seraph, colored serpents in aureole all around my body, I felt like a snake vomiting out the universe—or a Jivaro in head-dress with fangs vomiting up in realization of the Murder of the Universe—my death to come—everyone’s death to come—all unready—I unready—all around me in the trees the noise of these spectral animals the other Drinkers vomiting (normal part of the cure sessions) in the night in their awful solitude in the universe…”

To be sure (and understated), this was far from Allen’s first experience with drugs. But the impact of that Peruvian ayahuasca session left him with a solemn and newfound respect for all hallucinogens. By contrast, walking into Leary’s home and witnessing what Allen regarded as Leary’s overly cavalier attitude toward the psilocybin experiments he was conducting gave Ginsberg pause. “Leary had this big beautiful house,” he recounted, “and everybody there was wandering around like it was some happy cocktail party. They were all so cheerful and optimistic and convinced that their kind of environment would be welcomed as a polite, scholarly, socially acceptable, perfectly reasonable pursuit and would spread through the university and automatically be taken on as part of the curriculum. Like Leary couldn’t conceive of meeting any academic opposition. I kept saying, ‘You have no idea what you’re going to meet or what you’re up against.’” 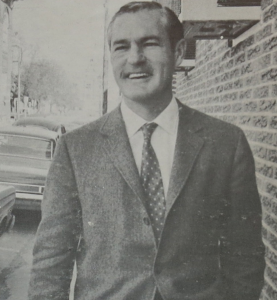 As I write this essay in honor of Timothy Leary’s 100th birthday, Health Canada has just granted its sixth federal exemption for churches in Montreal, Toronto, and Winnipeg to allow the import and use of ayahuasca in religious ceremonies. In 2019, a $17 million infusion of private funding allowed Johns Hopkins University to launch their Center for Psychedelic and Consciousness Research. All over the internet, modern day shamans and guides are selling their psychedelic services. From medical facilities to churches to private sessions of various stripes, North America is experiencing a resurgent, and very public, interest in the medical and spiritual use of psychedelics.

There are many people – particularly in the fields of medicine and science – who prefer not to mention Timothy Leary’s name in today’s discussions of psychedelics. They fear – with good reason – that their work will be tainted, targeted, or otherwise delegitimized as a result of the association; that they will be haunted by the ghosts of counterculture past. However, it would be false to ignore Leary’s position as a pioneer in psychedelic studies. His role in that capacity is fact, not opinion. Sixty years before Johns Hopkins’ Center for Psychedelic and Consciousness Research, there was the Harvard Psilocybin Project, overseen by Timothy Leary and his colleague at the Harvard Center for Research in Personality, Dr. Richard Alpert.

As I reflect on Leary’s 100th birthday, it also strikes me that Richard Alpert – whose name was changed to Ram Dass by his guru Neem Karoli Baba (also known as Maharajji) – died less than a year ago.

All three men – icons and heroes to so many – are now gone.

While my contact was limited, I am grateful to have spent time in the presence of all three. My last encounter – and the most significant of the three – was celebrating with Ram Dass at the consecration of the Hanuman temple at the Neem Karoli Baba ashram in Taos, New Mexico. It was July, 2019. Five months before Ram Dass left his body.

Hanuman, a powerful monkey god, is the Hindu deity most closely associated with Neem Karoli Baba. Ram Dass and his fellow devotees originally commissioned a Hanuman murti (sacred statue) to be built in 1977. The sixteen-hundred pound murti was carved by a family of sculptors in Maharajji’s ashram in Vrindaban, India, and shipped to America in 1978. For the next 41 years, Ram Dass and a tight circle of fellow devotees planned, fundraised, and eventually built a temple in Taos to serve as the murti’s permanent home. 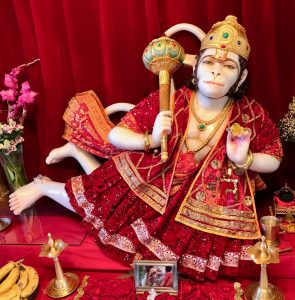 After four decades of work, the consecration of the temple was clearly a capstone spiritual event for Ram Dass. Surrounded by fellow devotees, chanting and celebrating, Ram Dass – despite his severe end-of-life infirmities – radiated joy, contentment, and even bliss. As I danced and sang in the temple beside Ram Dass and fellow celebrant Rhoney Stanley – former romantic and chemistry partner of famed 1960s LSD manufacturer Owsley Stanley – it was hard to ignore the palpable feeling that one spiritual and psychedelic chapter was closing, and another was opening. 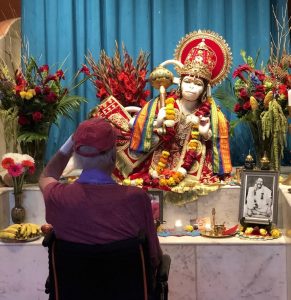 After Timothy Leary delved into computers – an experience that heavily influenced the latter part of his life – he noted, “PCs are the LSD of the ’90s.” It’s an excellent Leary soundbite, worthy of standing beside (if slightly behind), “Turn On, Tune In, Drop Out.” Although he didn’t live long enough to hear it, one might surmise that Marshall McLuhan, Leary’s friend and occasional advisor, would’ve appreciated both the message and the medium it addresses.

However, to my thinking, both quotes stand behind my favorite: “You get the Timothy Leary you deserve.”

This last one, made at the end of his life, is a startlingly direct, lucid, wry, and insightful comment. It also reflects a lifetime’s worth of developing self-awareness in the public spotlight.

Throughout all of Leary’s aphorisms there is a connective tissue, a shared ambition of transcendence, that further links him with Ram Dass and Allen Ginsberg. That link is particularly interesting to examine through the lens of their later lives, or “second acts.”

One strand of that tissue can be found in the evolution of Ram Dass’s perspective on psychedelic use. 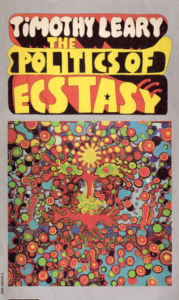 The first big chink in Ram Dass’s devotion to hallucinogens came at the hands – and on the tongue – of his Indian guru Neem Karoli Baba (aka Maharajji). After giving Maharajji a heroic dose of LSD, which he did on two occasions, and to which there was no discernible effect, Maharajji told Ram Dass, “These medicines will allow you to come and visit Christ, but you can only stay two hours. Then you have to leave again. This is not the true samadhi. It’s better to become Christ than to visit him – but even the visit of a saint for a moment is useful. But love is the most powerful medicine.”

Ram Dass later noted, “In view of his words, when I reflected on my trips with LSD and other psychedelics, I saw that after a glimpse of the possibility of transcendence, I continued tripping only to reassure myself that the possibility was still there. Seeing the possibility is indeed different from being the possibility. Sooner or later you must purify and alter your mind, heart, and body so that the things which bring you down from your experiences lose their power over you. Psychedelics could chemically override the thought patterns in your brain so that you are open to the moment, but once the chemical loses its power the old habit patterns take over again. With them comes a subtle despair that without chemicals you are a prisoner of your thoughts.”

Ram Dass’s guru Neem Karoli Baba was Hindu. Thus, Hinduism played a tremendous role in Ram Dass’s post-1960s evolution. Allen Ginsberg’s spiritual teacher, Trungpa Rinpoche, was Buddhist. Thus, Buddhism played a tremendous role in Allen Ginsberg’s post-1960s evolution. Buddhists and Hindus share a seminal concept known as saṃsāra which serves as a cornerstone to their philosophies. In essence, Saṃsāra is the cycle of death and rebirth that keeps us trapped in the material world. In this material world we buy groceries, wear socks, mow grass, write poetry, and feed our cats and dogs. As disturbing as it is at times, there is comfort in focusing on the material world because, as humans, preoccupation with life’s most immediate needs is our default mode. However, in Buddhism and Hinduism, one goal of their practices is to escape the cycle of saṃsāra; to transcend the material world. In these philosophies, saṃsāra propels an illusion that creates a veil between human and divine awareness. For this reason, both Buddhists and Hindus have spiritual practices – breathing, meditation, chanting, body movement – designed to get beyond, or pierce the veil of saṃsāra , in order to gain a deeper connection to (or recollection of) divinity.

When Ram Dass describes coming down from psychedelics as returning to being “a prisoner of your thoughts” it is ultimately saṃsāra he is talking about. Saṃsāra is the prison. Both Ram Dass and Allen Ginsberg, each in their own ways (which also often overlapped), sought to transcend the prison of saṃsāra . In a very tangible way, those spiritual pursuits ushered both men into the impactful second acts of their lives. It also took them farther away from the drugs, including hallucinogens, which initially served as useful tools for opening their awareness, or as Ram Dass says, getting “a glimpse of the possibility of transcendence.” 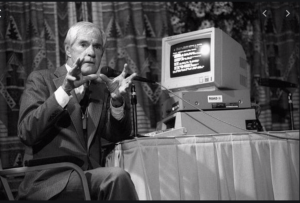 In a way, one may see Timothy Leary’s embrace of technology as a similar attempt to pierce the veil of saṃsāra . It is important to remember that as early as the mid-70s, Leary was talking about his “eight-circuit model of consciousness” which blends the language of technology with that of psychology and spiritual awareness. Leary also memorably said that “Your brain is god,” “the universe is an intelligence test,” and, in 1993, he recorded a “public service video” entitled How to Operate Your Brain. It’s also worth noting that, per his “eight-circuit model of consciousness” Leary regarded the first four circuits of our minds, or “larval circuits,” as dealing with basic functions of survival (i.e. the “real world”), and the last four as dealing with mystical experiences, enlightenment, and psychedelic consciousness (i.e. transcending saṃsāra ).

Peered at through this spiritual lens, we find three men – Timothy Leary, Allen Ginsberg, and Ram Dass – all confronting the limitations of their human incarnations and striving to transcend material existence. For our purposes, I name this striving: an attempt to escape the cycle of saṃsāra . Ram Dass and Allen Ginsberg – who likely would’ve more readily agreed with such terminology – tried to get there by focusing on established practices within ancient traditions. Timothy Leary sought transcendence through technology in all its forms, including the technology of drugs. Regardless of their paths – in addition to their shared early roles as countercultural heroes – we find these three men connected at the end of their lives by their fervent pursuits of transcendence. I say happy 100th birthday Timothy Leary and godspeed to them all.
Timothy Leary’s Dead – 1996 Indie film/documentary by Paul Davids

Tim, where are you now? by Sam Rosenthal on Projekt Records features Alex Cox, Lee Renaldo & others