Auden’s “The Age of Anxiety”

Allen, continuing with his “Basic Poetics” class at Naropa – January 7, 1980

AG: So Auden –W.H.Auden, the… who, incidentally, it was his anthology that I was reading from originally – the… it’s the first thing in his five-volume anthology of English poetry, poetry of the English language (which we’ve talked about before) also, in the (19)40’s, during World War II, wrote a very great poem called “Age of Anxiety” in old Germanic and Anglo-Saxon alliterative meters. So I thought I would read some of that (and there’s one copy that I got out of the Boulder library which I’ll put in our own (Naropa) library for a couple of weeks, and then I have my own copy here, so if anybody wants to take a look at this at leisure, do so). It’s called “Age of Anxiety”. I think it came out in… wait a minute, let’s see..(19)44 maybe?.. [Editorial note – it was 1947] – It was a big deal. Auden around about that time was a really great poet and is, remains, a great poet. I remember, at the time, I was living with (Jack) Kerouac and with (William) Burroughs near Columbia University on 115th Street. Burroughs had known..Bill Gilmore, who was a.. stayed with Auden in a house in Brooklyn Heights in (19)39 when Auden first came over from England, and there was a brilliant, eccentric, strange guy named Alan Ansen, who, at the time.. was a big queer, who lived out in Woodmere, New York, and had huge learned correspondence with Thomas Mann about the prosody in Wagner’s Ring operas (because Wagner was into prosody, as was Auden, as was Stravinsky, as was Chester Kallman, as was Alan Ansen), prosody, like the measurement of word and music together, or the music of the language or the measure of the language, the measure of the line. And Alan Ansen, who was a friend of (Jack) Kerouac’s and mine,  and Neal Cassady, was Auden’s secretary when he wrote this huge epic poem. “Age of Anxiety” in alliterative meters. And I was.. So we were all very familiar with it, back in the (19)40’s – mid-‘Forties and late-‘Forties and some early (19)50’s – and I haven’t looked at it since, until today – again – (I) went over to the Boulder Library and picked up a copy (because I remembered it was written in the alliterative meter) and it really is great. So I picked out some passages that I remember from the (19)40’s – to the (19)80’s [present], that almost thirty-five years have stuck in my mind, so I guess they still are good. 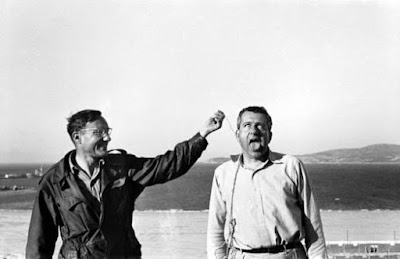 The scene is.. It’s during the war, and “Age of Anxiety”, a really prophetic poem. “A Baroque Eclogue” (sic)  – (“Baroque”, because he’s using a great many fancy complicated meters). It’s Auden at the height of his energy and power, and also his scholarship, also his crankiness – that he went back.. So, eccentric crankiness. There was a struggle at that time between various schools of poetics. One, to go to a more open form like (William Carlos) Williams, who was just breaking through then and writing his best work, beginning “Paterson” then, an American meter. Auden, who was living in New York on Seventh Avenue and… I guess Seventh Avenue and Twenty-third Street, near the Chelsea Hotel.

Later, I think, Williams sent me to see Auden. The discussion was over prosody and meter between us, open-form prosody, and.. despite the fact that Auden was using older English forms and strict counted meter, he thought, every single line of Auden was different at least, it wasn’t as if they were metronomic and repetitive and boring. There was a real ear at work. So, he gave me a little note to go visit Auden, and I went to see him. Also I’d known Chester Kallman, his boyfriend, and Alan Ansen, his secretary. So Ansen typed up “Age of Anxiety” – and one of the people we’re going to be trying to get here [Naropa} teaching sooner or later is Alan Ansen, because Peter saw him… [to Peter Orlovsky] – You saw him this summer?

PO: He’s teaching at the American Center college in Athens. He brings about forty books to class. It meets about two hours, once a week – makes fifty dollars, and he’s teaching (Ezra) Pound, (T.S.) Eliot..

AG: He’s been studying Hebrew and Arabic and Persian and Sanskrit. He knew German well in those days (and) French well enough to do… he did.. his big thesis was a thesis on the prosody, the metrical schemes and the prosody, related to music in theWagner Ring cycle. So, maybe we’ll get him here sooner or later. Anyway, this [“Age of Anxiety”] is what he typed up 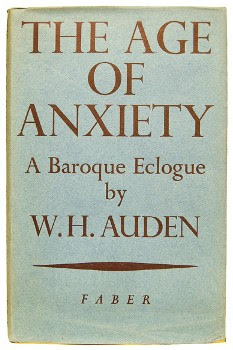 It is a situation during the war, late at night,  in a bar on Second Avenue, New York City. A young soldier on leave, a navy intelligence man of some sort (maybe gay but in the closet),  a Jewish woman, not-so-young anymore, but on the town, looking for someone to sleep with or talk to, and a sort of straight middle-aged man, who is, actually, sort of the hero, at the end of the evening goes home alone and has a long soliloquy which I’ll read

So it’s Malin, Emble, Quant and  Rosetta – various people. So they’re all sitting along by the bar, thinking their own thoughts. War news on the radio. They happen to get together and start talking. They have a good time together, get a little drunk, kind of a little paradise between them that night, a “moment in eternity”. They all go to Rosetta’s house to have a drink. She falls in.. she has a crush on the young soldier (so has one of the guys) but she makes out with him (or thinks she’s going to). They all drink to their delightful night. The two other older guys go home and leave them together. She sees them to the door, comes back and finds the young soldier drunk and asleep on her bed, (he) can’t do anything! (She) has a long soliloquy over his.. corpse! (which I’ll read also) – All done in this alliterative meter.

So, Emble was thinking.. (they haven’t met yet – it’s just, what are they thinking about, sitting alone) – Emble was thinking.. “Estranged..”  (this is the young soldier) – “Estranged, aloof,/They brood over being till the bars close,/The malcontented who might have been/The creative odd ones the average need/To suggest new goals. Self-judged they sit,/Sad haunters of Perhaps who after years/To grasp and gaze in get no further/Than their first beholding, phantoms who try/Through much drink by magic to restore/The primitive pact with pure feeling,/Their flesh as it flt before sex was /(The archaic calm without cultural sin/Which her Adam is till her Eve does),/Eyeing the door, for ever expecting/Night after night the Nameless One, the/Smiling sea-god who shall safely land/Shy and broad-shouldered on the shore at last,/Enthusiastic, of their convenient/And dangerous dream; while days away in/Prairie places where no person asks/What is suffered in ships, small tradesmen,/Wry relatives in rocking-chairs in/Moss-grown mansions, mothers whose causes/For right and wrong are unreal to them,/ Grieve vaguely over theirs: their vision shrinks/As their dreams darken; with dulling voice/Each calls across a colder water,/Tense, optative, interrogating/Some sighing several who sadly fades.”

“But now the radio, suddenly breaking in with its banal noises upon their separate senses of themselves, by compelling them to pay attention to a common world of great slaughter and much sorrow, began, without their knowledge, to draw these four strangers closer to each other. For in response to its official doctored message:

Then Rosetta muses on politics:

“Arrogant officers, armed in cars Go roaring down roads on the wrong side/Courts martial meet at midnight with drums,/ And pudgy persons pace unsmiling/The quays and stations or cruise the nights/In vans for victims, to investigate/In sound-proof cells the Sense of Honor./While in turkish baths with towels round them/Imperilled plotters plan in outline/Definitions and norms for new lives,/Half-truths for their times. As tense as these,/Four who are famous confer in a schloss/At night on nations. They are not equal:/Three stand thoughtful on a thick carpet/Awaiting the Fourth who wills they shall/Till suddenly entering through a side-door/Quick, quiet, unquestionable as death,/Grief or guilt, he greets them  and sits down./Lord of this life. He looks natural,/He smiles well, he smells of the future/Odorless ages, an ordered world/Of planned pleasures and passport control,/Sentry-go, sedatives, soft drinks and/Managed money, a moral planet/Tamed by terror: his telegram sets/Grey masses moving as the mud dries./Many have perished. More will.” – [So he gets really serious, prophetic – 1944. Of course, he was then talking about the image ofRoosevelt–Churchill… Roosevelt, Churchill – Yalta, Roosevelt and Stalin, De Gaulle.

Class concludes with brief outline of future classes, re-iteration of assignments and brief further announcement
AG: (We) got any more time? – No, not very much but maybe..I think, maybe I’ll continue with this, reading next time, read some more of the Auden . Then we’ll go on to (William) Dunbar,(John) Skelton– Skelton, Dunbar, okay, just great sound, but Skelton – Skeltonics. That is to say, Skelton is the guy who wrote a certain kind of short-line poetry that jiggles, that jiggles and rhymes and it is imitatable – Skeltonics. So that’s worth checking out too.
So we’ll have Dunbar, Skelton, and then go on to.whatever ballads you might look through in the Norton Anthology –  and I’ll bring in some books of ballads to supplement the ballads we have here. So, okay, our assignments so far – one litttle poem “that falleth as the dew”, like “I Sing of A Mayden” one little poem, one imitation – [turns to Student – You were not here for.. okay..well, when you get the anthology, “I Sing of A  Mayden”, what’s the title of that poem?
Student: “I Sing of A Mayden” , page fifty-seven.
AG: Page fifty-seven – “I Sing of A Mayden”  – We’ve still got half a minute – Don’t move – Fifty-seven. Well, she wasn’t here when we did it, so why don’t we do that again (because Peter (Orlovsky) didn’t hear that (either)) – Get your fifty-seven out -“I Sing of A Mayden” – Before we go -Page fifty-seven –  One more song before we leave – To imitate this poem, m’am, is the assignment  [Allen concludes the class by leading a group reading of the poem, the entire poem] – still sounds good – maybe next time, we ought to do a reading of  “This Ae Night..” (Lyke Wake Dirge). (Perhaps) we’ll get that going next time. Yeah, look it over again, we’ll do that, and then we’ll get on to the alliterative…and one copy of the Auden will be in the library….