One of the great (sadly out-of-print)  Ginsberg titles (but something well worth hunting down) is the selection published in 1980 by Winston Leyland‘s pioneering Gay Sunshine Press – Straight Hearts’ Delight – Love Poems and Selected Letters 1947-1980 by Allen Ginsberg and Peter Orlovsky. 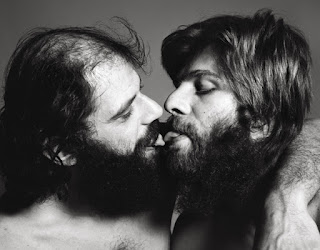 Leyland in his introduction notes:
” Three years ago [1977] I conceived the idea of publishing a “lovers handbook” by Allen Ginsberg and Peter Orlovsky. My intention was to include poems and letters by the two poets in one volume, concentrating on those which related to gay love and consciousness and those with special bearing on their own love relationship. I have known both men for several years and have published their work many times in Gay Sunshine Journal during the past decade, including an in-depth interview with each of them. Allen’s poems also appear in the two anthologies of gay literature edited by myself – Angels of the Lyre (1975) and Orgasms of Light (1977)…Both poets reacted with enthusiasm to the idea, and the book took form..”

Although a goodly number of the poems can be found in other collections, a number of the materials can’t, (most notably the (Peter) Orlovsky materials). Where else to find the clinically graphic and rivetingly transcribed “Sex Experiments”? (you have been warned!) –
(A rare recording, from 1964, of Orlovsky reading from them can, incidentally, be found in the archives of Harvard’ s Woodberry Poetry Room – here – he also can be heard (briefly) reading from them – here)

or (where else to find a gathering of the) delicate sensitive line-drawings by Bob LaVigne? 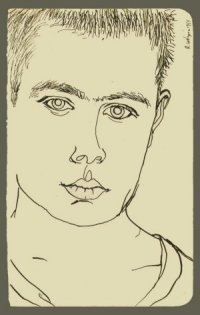 Even more precious, the Ginsberg-Orlovsky correspondence.  As Leyland notes:
“In the past twenty-five years hundreds of letters were exchanged between Allen and Peter during their periods of separation (mostly when travelling abroad). There obviously was insufficient space to print their collected correspondence in one modest volume. I therefore decided to select the most interesting letters from a nine-year period of literary and personal accomplishments (1956-1965).”

Maria Popova, writing recently, in brain pickings – Their letters, filled with typos, missing punctuation and the grammatical oddities typical of  writing propelled by bursts of intense emotion rather than literary precision, are absolutely beautiful.”

(More letters have recently published and can be found here

Allen (in Paris) to Peter (in New York) Jan 20, 1958:”Dear Petey,  O heart O Love everything is suddenly turned to gold! Don’t be afraid don’t worry the most astounding beautiful thing has happened here!…last night finally Bill (Burroughs) & I sat down facing each other across the kitchen table and looked eye to eye and talked. I confessed all my doubt and misery – and in front of my eyes he turned into an Angel!…”..”We talked a long time got into tremendous rapport very delicate. I almost trembled, a rapport much like yours and mine like yours and mine, but not sexual, he even began to dig my feelings about that, my willingness but really I don’t want to, has stopped entirely putting pressure on me for bed – the whole nightmare’s cleared up overnight, I woke this morning with great bliss of freedom & joy in my heart, Bill’s saved, I’m saved, you’re saved, we’re all saved, everything has been all rapturous ever since – I only feel sad that perhaps you left as worried when we waved goodbye and kissed so awkwardly – I wish I could have that over to say goodbye to you happier and without the worries & doubts I had that dusty dusk when you left…”

Allen (in London) to Peter (in New York), Feb 15, 1958:
“Got your letter yesterday, was so happy to receive it and your sweet sex talk. I had been running around with mad mean poets & world-eaters here & was longing for kind words from heaven which you wrote, came as fresh as summer breeze & “when I think on thee dear friend/all losses are restored and sorroews end”, came over & over in my mind – it’s the end of a Shakespeare Sonnet – he must have been happy in love too – I had never realized that before…”

Allen (in Paris) to Peter (in New York), April 1, 1958:
“O mustache besweetened, hey Peter, what’s up? Drinking yea  & typing under light on table – I finally fixed Gregory (Corso)’s broken radio. So have a l’il music nowadays. Gregory finally got along well with (Peggy) Guggenheim, she almost took him to Greece. Alan (Ansen) going to Greece the first time in 2 weeks.  We could talk in bed all night…like praying over my typewriter..hey Peter across th’atlantic in midst Manhattan….turn over…I not masturbating much but once had long fantasy screwing you, remembering last night the smile on yur face when I did..was that Ok, at last?  I felt such freedom that you were mine, & wanted to stay together with you for good….”……”ah, I remember how melancholy I was at night by hedges by church in Paterson wondering what the ache in my chest was for…and now to be old & know what for, & it be there like sweet belly gold for us…O Shoe bubblegum Lafcafio’d Pete, boom, boom, titty to tit. Write me little letter soon, please doan leave me wait too long, honey please honey – Love Allen”

Allen (in Paris) to Peter (in New York), June 21,1958:
“…What did I do rape you pink in Barcelona? I don’t remember! Where, How?  I remember here, & Madrid, I wish we were in the same room now and able to touch… I wrote you letter same day (& sent it) or day before I got yours, here’s another. Well I’m sure I’ll be home July but don’t know how yet and July is coming close..”..”Happy ready to come home soon- Love Love Allen

Peter (in New York) to Allen (in Paris), July 6, 1958:
“…Here take this letter,  hold it in your hands for eternity or untill we die. ByBy toots, keep the shade up, scratch when you itch…”

Allen (in Chile, c/o US Embassy, Santiago) to Peter (in New York), Feb 9, 1960:
“..I have had some weird dreams – one that I left you behind in some city in the south, and took off with a professor to another city 50 miles away – then realized I had forgot you, and you had no way of getting in touch with me, so got worried in the dream that you’d get lost, and felt guilty that I’d neglected to think of you, & realized you were suffering maybe lost in some southern city not speaking spanish, thinking I’d forgot you…”

Peter (in New York) to Allen (still somewhere in South America), March 24, 1960:
“Its spring, the cats are again screwing on the floor I’m jeliuus, but she layes on her side with one foot into his belley so he can’t get in, my how they talk togeteather when he tries…”

Peter (in New York) to Allen (in Paris), June 21, 1960:
“Don’t worry Allen if you want babies they will come yr way by the tons & then we grow chicken coops full of tickleing babies & you can starve them with poetry, don’t worry, I always wondered why yoou had that bregual [Bruegel] childrens games painting above yr bed & know you know why & that kid shitting in the corner way back the stone wall is your son and yr eye caught him for a second. At least Allen I could stay around the back porch  & maybe if you feel like throw me a few penies & do yr nailing up screen to keep flies away, & Allen you won’t boot me off the back porch too often, I won’t know what to do with myself….”

Peter (in New York) to Allen (in Lima, Peru), June 23, 1960:
Dear Allen with dark Indian Death Eyes”…. “I also thought, Yesterday, that you…feel I do harm to myself if we separated & you get married (children) or I get mad at you & so  I think now whatever we do (weather I turn into cockerroch cralling alomg 1st Ave coblestones & get Xed by truck) (both get married or just you) (as you fall in love with John Wieners) or bring back new boyfriend from Lima as you want to go away alone by yr self to india hill cave – or sit on my cock & talk it over & lay down & do it again, as you get married, & I take care of yr baby while you blink in Jungle Storms or open the door & say, “Now Peter you can’t just stay around and do notheing all the time” – or be happey to each other at important times – maybe I am yr Child and you don’t know it Allen – Allen, I love you. Allen, Please Allen give me a sapey (sap) kiss….”

Allen (in Tangier, Morocco) to Peter (in Athens, Greece),  August 3, 1961:
“..I guess your leaving must’ve robbed me of last prop, and it was courageous of you to do the same thing for yourself & take off and be a cloud & no more a part of the idea we had together, which was partly beautiful idea, but as idea doomed to fail after Zen-cut-up-loss of role-identity. The beautiful shiver tho’ always remains
As to sex, talked with Bill (Burroughs) about that – his objection is to the use of sex as part of the idea of identity, as part of re-affirmation & support of me-ness & ego – he admitted that sex might be a way of merger of souls on ego-less basis like we have had it, – and so he doesn’t put it down, finally, in itself, but only where it is corrupted especially in civilized countries where it is part of power-ego grab. There’s no real argument between you..”

Allen (in Athens, Greece) to Peter (in Israel), October 21, 1961:
“…Thank you for all letters sorry you not receive mine, some were crazy. I was lonesome for you.   Love to you from your old  Lover   Allen”

Peter (in Varanasi, India) to Allen (in San Francisco), September 15, 1963:
“Dear Belley Allen love”…”…I’m so glad you wrote me saying what you said. I take you as my devine Love Gerhu [guru]. you kept humming belly-Love in my ear & letters until I got yr meaning – swing open yr Blake gates. I can almost hear you sound to hear – I be alright now my Love…I can make it back to  N.Y.C. Overland – Like you say – we meet in N.Y.C. in X-Mass my Love – I be good & Happey so much thanks – Kiss to you….”

Peter (in Pakistan, traveling to Istanbul) to Allen (in San Francisco), September 25, 1963: “Hello Hinde Long Sweet Beard Hair Eyes – Was just crying thinking you may die before we meet again….I cry to think I may die or my money get robbed & I not get back home to see you again. I am sorrey (to) worry over such things. There is so much joy good things of help & love to give in the world that I don’t want to die before it’s done…”