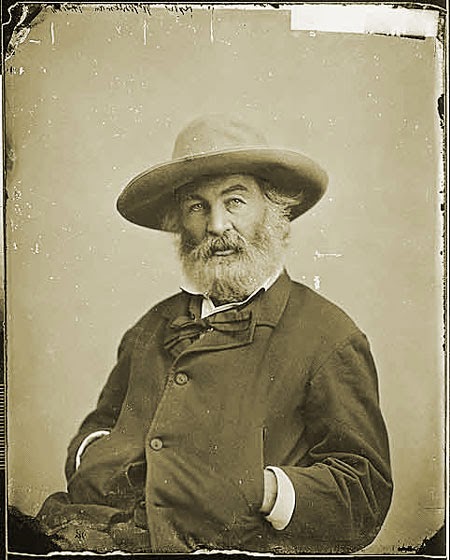 AG:So how many here have been listening to (Chogyam) Trungpa’s lectures? How many go? He’s just entered into the Mahayana discourse (and his last lecture was on the paramitas, or excellencies of mind, that were by-products of sitting meditation. The excellencies were generosity, discipline, patience, exertion, concentration and intellect, and I’ll be rummaging through Walt) Whitman to find examples of generosity, discipline, patience, exertion, concentration and intellect).

Somebody at the lecture last night asked how do these schematic Mahayana Buddhist virtues differ from anybody’s Whitmanic ordinary mind generosity, discipline, patience, exertion, concentration and wisdom? What’s the difference? His answer was that the Buddhist development was based on egolessness rather than the ambition to buy off the universe by being generous, or feel good by being generous, or by getting credits for being generous (which is a nice distinction, actually. It probably applies).

What I would like to do when we’re going through Whitman is, there is this problem of ego or egolessness in Whitman, which is interesting. I started bringing it up in the end. He extended his sympathy to the farthest corner of the universe. He found himself empathizing with all sentient beings and insentient beings. To what extent was this buying off death, rather than allowing it? To what extent was he trying to create a god of himself, or of man, or of beautiful young men? – an ideal nature that would survive old age, sickness and death, and transport his spirit beyond what might be acceptable natural boundaries – which is ordinary dying. To what extent was this a battle against death? To what extent is his extension of sympathy a plastering or projection of himself onto the entire universe so that he could feel that, if he were dying, at least the universe wasn’t dying and his word, his tone, and his spirit, would survive. And to what extent was that a defect in his wildness?To what extent did he let go of himself? To what extent was his projection of himself on the entire universe a letting go of himself and to what extent was it a reinforcement of his >own truth? Actually, I think it’s mixed. But it’s interesting to read Whitman from that point of view – either as the supreme universal egotist, or as the supreme giver-up and spacious mind.

We’re on Part V of “Song of Myself”. So he begins it with an assertion of his soul –    “I believe in you my soul” – (which he’ll define later, I hope ) – “I believe in you my soul, the other I am must not abase you/And you must not be abased to the other./ Loafe with me on the grass, loose the stop from your throat,/ Not words, not music or rhyme I want, not custom or lecture, not even the best/ Only the lull I like, the hum of your valved voice”

Well, there’s some evidence there of a loosening. He says actually a loosening and a loafing, so there’s a kind of meditative attitude in that sense. The whole thing is beginning (in) the first section with “loafing”, which, in a sense, was his form of meditation. In the first part, “I loaf and invite my soul” (but he’s loafing to invite his soul, there’s still something that’s going to come from it) .So, “Loafe with me on the grass” – he repeats.

Then, the most tremendous moment in Whitman, in terms of person, in terms of Whitman’s personal family“I mind how we once lay such a transparent summer morning,/ How you settled your head athwart my hips and gntly turn’d over upon me,/ And parted the shirt from my bosom-bone, and plunged your tongue to my bare-stript heart,/And reach’d till you felt my beard, and reach’d till you held my feet./Swiftly arose and spread around me the peace and knowledge that pass all the arguments of the earth,/ And I know that the hand of God is the promise of my own,/ And I know that the spirit of God is the brother of my own,/ And that all the men ever born are also my brothers, and the women, my sisters and lovers,/And that a kelson of the creation is love,/And limitless are leaves stiff or drooping in the fields,/And brown ants in the little wells beneath them,/ And mossy scabs of the worm fence, heap’d stone, elder, mullein, and poke-weed.”

Well, it begins with a grand generalization, and ends up in poke-weed. That, I always thought, was sort of the heart of Whitman. It certainly got directly the physical homosexual heart, certainly. Apparently an epiphanous moment when somebody completely accepted him and made love to him, which I think he was probably unused to – on an open field – actually parted his shirt, kissed his heart, and held him from beard to toe – a kind of affirmation of his body and his desire (which to him probably seemed like a cosmic and universal experience), which set his complete body tingling and opened him up for the first time to a fittingness in his own desire, or a realization that his own desire was answerable (which is an experience, I guess, we’ve all had at one time or another, of achieving love that we had despaired of, or of finally getting what we desired). It’s the most epiphanous moment in Whitman, in terms of intense emotional grandeur.

What I liked about it always was that it wound up with the “elder, mullein and poke-weed”, that the cosmic or universal consciousness that was catalyzed by his love experience was manifested in his minute observation of the detail of ““elder, mullein and poke-weed”. He didn’t go off into a cadenza about the clouds, he goes off into a cadenza about the worm fence and heaped stones. So that the experience does have the characteristic of existing in a lot of dimensions besides emotional fullness. There is also direct optical perception, or perception, samatha vipassana perception, minute detail, insight into what’s around him.