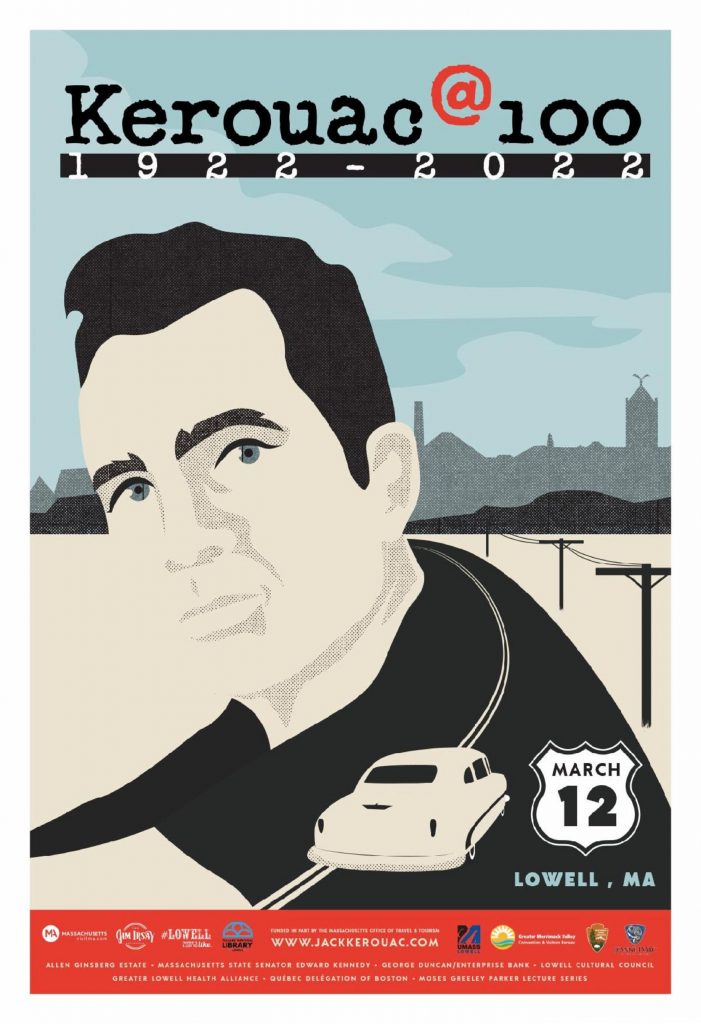 Kerouac Centennial – We remain eager regarding the festivities (the 100th anniversary of Kerouac’s birth will soon be upon us on the 20th of March) – and today the Jack Kerouac Estate in collaboration with the Kerouac @ 100 Committee, released full details of an array of “events and happenings to take place in his Lowell, Massachusetts hometown starting in his birth month of March”.

For the complete listing – see  here

Jim Sampas, Literary Executor of the Estate, is quoted:

“The celebration of his centennial this March in his hometown will include important artifacts, such as an exhibit of the original On the Road scroll manuscript, and, for the first time ever in one place, all the photographs of Kerouac taken by one of his dearest friends, Allen Ginsberg.  There will be readings, film screenings, and musical performances, all paying tribute to one of the most important authors of our time, and the versatility and openness of Kerouac’s work.”

Both the scroll – on loan from The Jim Irsay Collection – (a 24-foot portion will be on show) and the Ginsberg photos are a part of the exhibit ‘Visions of Kerouac’, scheduled to open on Friday, March 18 at the Lowell National Historical Park’s Boott Cotton Mills Gallery.  This exhibit will also include “archival books, writings (and) personal objects”, as well as, alongside of Allen’s photos, a collection of remarkable images by the photographer, John Suiter.

On Saturday March 19 at the Luna Theater, “acclaimed composer and jazzman  David Amram – now in his 92nd year – will reflect on his days with Kerouac as he recounts them in his book Offbeat – Collaborating with Kerouac.”  There will also be a screening of the legendary and unforgettable Robert Frank/Al Leslie film, ‘Pull My Daisy,’

Other announced events include, the weekend before – Friday March 11 – “Kerouac Night of 100 Poems: Blues & Haikus”, an event put on at the Pollard Memorial Library – and on Saturday March 12 – a “Kerouac Biographers Panel”  (featuring Dennis McNally and Holly George-Warren, moderated by Todd Tietchen), a “Poetry Reading” (an evening of poetry with Anne Waldman, Scarlett Sabet and Paul Marion) and a “Musical Event” (a night of music with Frank Morey and Willie Loco Alexander, directly followed by another poetry reading)

We’ll continue to keep you abreast of Kerouac Centennial celebrations (including our own contributions) here on The Allen Ginsberg Project – Stay tuned.