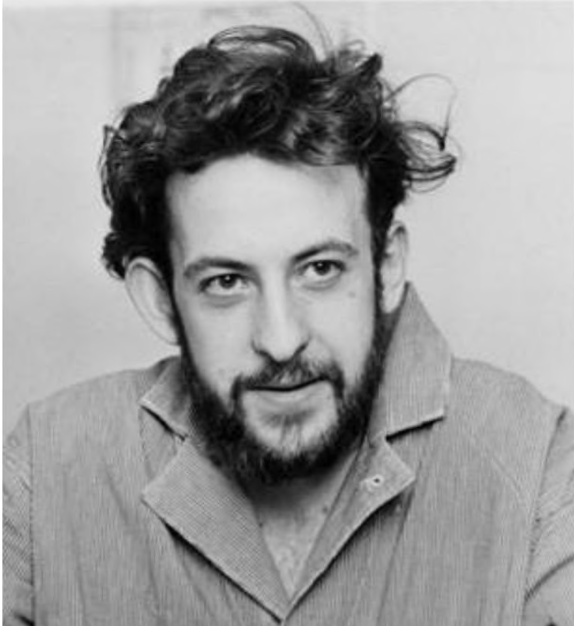 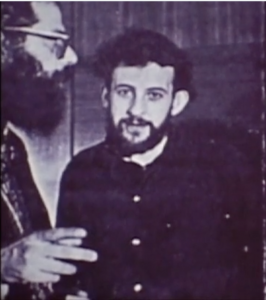 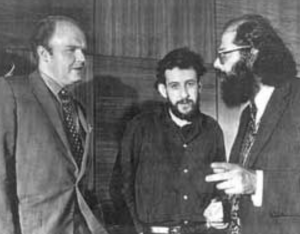 ‘It was Nov. 24, 1968, when visionary poet, artist, publisher and social provocateur d.a. levy, put the barrel of a .22 between his eyes in his apartment at 1744 Wymore St. in East Cleveland, and pulled the trigger. He was only 26 years old.”

Controversy, productivity, genius, suicide (or murder?) – levy’s brief life has all the components

Kon Petrochuk (Kon Pet Moon)’s artfully-constructed  d.a. levy film,  if i scratch if i write presents a detailed account of this extraordinary figure.

No shortage of levy materials available on the web. We would particularly draw your attention to the extensive resources showcased in the d.a.levy collection at The Michael Schwartz Library at Cleveland State University and the d.a.levy center for progressive poetics & the art of the spoken word at deep cleveland

Verdant Press has a valuable bibliography

For another  – see here 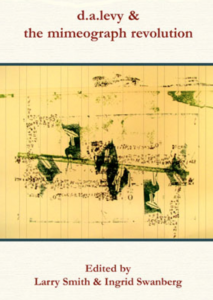 from back in 2007 on Big Bridge – a d.a.levy satellite edited by Ingrid Swanberg and Karl Young

“d.a.levy – Darryl Levy – I try out his names, reaching to know the man; his poems, his polemics. I feel brother to Levy not only as poet but as fellow-worker in the Buddha-fields. Levy had a remarkable karma – he saw who he was, where he was, what his field of activity was, and what his tools were to be”

““i have a city to cover with lines” – His hometown, Cleveland, that he wouldn’t move from. Like the Sioux warriors who tied themselves to a spear and stuck it in the ground, never to retreat. Why? An almost irrational act of love-to give a measure of self- awareness to the people of Cleveland through poesy.”

Allen, Birmingham notes, had an ambiguous, but ultimately supportive, response to the life and work of levy:

“..levy hosted Ginsberg in 1967 at a benefit reading in Cleveland [famously, May 14th, 1967, at The Case Institute of Technology Strosacker Auditorium] – Ginsberg was in the process of crossing the United States for his Fall of America collection. This was the “Wichita Vortex Sutra” period…. (I)t appears to be that the two poets used each other for their own purposes, rather than there being mutual admiration and cross pollination. At least that is the sense I get. Ginsberg kind of blew into town, created a fuss, raised some money, and annoyed the police and the squares. Did he help or hurt levy’s cause? Connections with levy definitely added a feather to Ginsberg’s cap given what levy had come to represent in the counterculture.”

“levy”, he concludes  “has a complicated and conflicted relationship to the Beats”

“I wrote to him and asked him to come down, and I used the word “hippies” in the letter,  because I think one of the titles that we were working with that day was called “the hippy radical humanists”, and I think I described that as the title, and he wrote an angry kind of letter, I guess, to me. And  I had used the word  “affinity” in there between his work and that of d.a., and – “Oh Carothers”, (he wrote), “what affinity?, newspaper distortion is about all I can think of, I don’t understand what you expect me to do…” 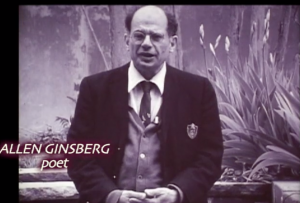 Allen Ginsberg as he appears in Kon Petrochuk’s d.a.levy film, if i scratch, if  i write

Notwithstanding, he did plenty. He was notably quoted in the local papers with the forthright declaration – “Social and political criticism is protected by the Constitution. Instead of persecuting him, he (levy) should be given a prize for his poems about Cleveland. He stands alone in his effort to lift Cleveland…I dig his poetry. It is learned and sincere, but he is being made to suffer in the classic American way.” 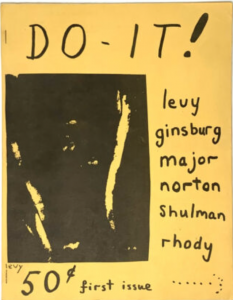 AG:  “Well, he had the books, he had the imagination, he had the poetic imagination, he had the humor, he didn’t have the grounding in actual sitting for the symbols that he was talking about, he was talking about the Tibetan Oracle (The Buddhist Third Class Junk Mail Oracle),  (Tibetan) Stroboscope,(North American) Book of the Dead, Six Yogas, Super-Doctrines, Mahamudras,  but that’s all based on ordinary mind, sitting quietly, watching your own anger, and being aware of your own anger, and not letting the anger of the cops and not letting the anger of the civilization get you, but cutting off, and watching that anger, treating that anger, like dreams, (dreams because the anger passes, your anger and anybody else’s)”

“In New York we’d had problems with the coffee shops – the police wanted us to get entertainment permits you know, as if we were a nightclub when we were just reading poems in a coffee shop. So in New York, legally, we were liberated. But out there the police are really violent and brutal. So we went into the Gate before the reading and we were going to have some sort of poetry reading but then we were told that according to police and according to the law they’d just been told, that afternoon, that if they had a poet reading in the coffee shop, everybody would be busted. 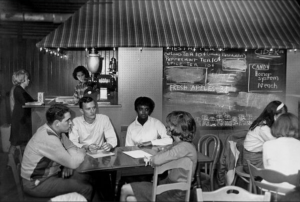 So we decided, well, we’ll go to the Gate anyway, and we’ll all sit and have coffee, and we’ll talk and maybe sing, community singing or something. So I remember I was sitting at a table with, I think, Levi and Ed Sanders and a couple of others (maybe Chris (sic) and a few other people), And, after a while, talking together – crowded,  lots of people there, big excitement – and then, there were the police coming, I heard.  So we started singing (like “We Shall Overcome“ or something?) – so that wasn’t entertainment, that was just people sitting in a coffee shop singing “We Shall Overcome.  And then we started singing Hare Krishna, you know – Hare Krishna Hare Krishna, Krishna Krishna, Hare Hare, Hare Rama, Hare Rama, Rama Rama, Hare Hare, very naively singing these devotional songs, when all of a sudden the doors burst open, and about fifty policemen, with big shiny leather boots and heavy crash helmets and big black cloaks and long black truncheons and guns, all rushed into the room, and said, “Everybody up against the wall you’re under arrest!”

So I said to the guy who was, like standing next to me, the big policeman, the man who seemed to be one of the leaders,  (I) said ‘”Who ‘s in charge here, anyway?  You got a warrant?” – “We don’t need any warrant around here” – “So I said, “Who’s in charge?”  He said, “Nobody’s in charge”  (I think that a citizen’s got a right to ask who’s in charge at least, you know – who’s the captain?) –  And its true, nobody was in charge (maybe the devil or something? (not that I believe in the devil, but..) – Aggression was in charge, Police State was in charge, Unconstitutional behavior was in charge, Un-Americanism was in charge.”

Rare footage is available of levy reading portions from one of the two poems he performed that day (a section from his 1966 poem Beret: a concrete poem for the war monuments) – here.

The performance on that occasion by the Fugs, incidentally, may be seen here

(Arthur Kleps) had formed this group (the Neo-American Church) to make peyote be used as a sacrament just like the Indians and have it under the freedom of religion, a typical American civil liberties union political ploy in a moment of, you know, inquisition and  persecution. So Kleps had said, (that) if anybody tried to stop our freedom, under the Ten Commandments, (no, not the Ten Commandments or..what was it… the Constitution? … the Bill of Rights – yes, that’s it)  – if anybody tries to stop our freedom under the Bill of Rights to eat peyote, we’ll assassinate him with LSD!  we’ll put LSD in the air!  (mentally assassinate him, that is)

–  So the newspapers in Cleveland carried this thing about d.a levy being the chief Boo-Hoo of this secret society which was out for political murder – and they said “political murder”, they didn’t say anything about the joke about LSD assassination in the air!  It probably was a foolish talk by Kleps, but it was poetic image and it didn’t have anything to do with killing anybody. But the newspaper, (and maybe the government, said that – a government bureaucrat got up and said “political murder”) . So levy was announced as this member in the newspapers, in the local Cleveland newspapers, by supposedly-friendly young newsmen that were, you know, hypocritically, supposedly taking his side against the police state. He was being put out as this guy who was a member of some particular society that was out for assassination and murder – (A) typical American yellow journalistic smut story.”