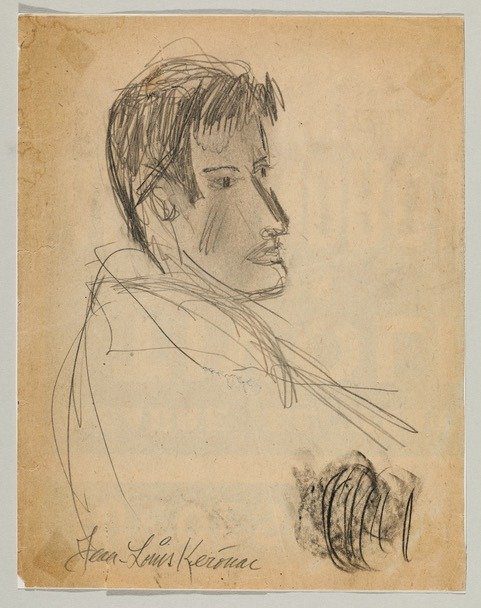 A fascinating show just opened this week at the John Natsoulas Center For the Arts in Davis, California  – The Beat Goes On – Poets as Painters.   Paintings, illustrations, self-portraiture, and portraits by and of Beat contemporaries are on display (many from private collections) in this groundbreaking exhibition.  For more information on the exhibit see here  (and if you missed it from last week – see Jerry Cimino‘s interview with Joe Lee, the show’s primary donor – here

Tomorrow  (from 6:30 to 10pm) will be the official opening-night celebration, with live jazz and poetry (featuring performances by Dr. Andy Jones, John Natsoulas, and Tony Passare). The Linda Bair Dance Company will perform an original dance, “Jack Kerouac”.

The show will run through to December 4th.

Allen, translation, and Artificial Intelligence, we mentioned, briefly, a couple of weeks ago  the Stanford University presentation –   “The Beats Within – Comparing AI & human adaptations of “Howl”  – Quinn Dombrowski and Kathleen Smith, the two presenters, have just put up on the Stanford Libraries blog a more detailed account with a number of intriguing illustrations (Allen filtered through “Sweet Valley High” and “The Hardy Boys“?,  “What if the opening line of “Howl” was part of an English regency romance?.”.. “What if Jabba the Hutt were a beat poet?”)  –  Don’t miss this article – You can see it in its entirety – here

Wayne Kramer’s Words and Music Book One we also mentioned a couple of weeks back. We mentioned his setting of Gregory Corso. Here’s Wayne’s complimentary music to Allen’s “At Apollinaire’s Grave”

Kramer   – “’At Apollinaire’s Grave’ has always been one of my favorite poems by Allen Ginsberg. I’d seen/heard him read it at (the Poetry Project) St Marks Church more than once in the 1980’s, including one time in particular, when Corso was heckling him from the crowd, but I had never heard this Library of Congress recording of him reading it until Michael Minzer sent it to me. When Allen and I were working together at New York Noise in 1987 on a song called ‘Dear M,’ I had told him that I’d wanted to compose music for his ode to Apollinaire, but we’d just never got around to it, as our respective schedules just never coincided.”

He goes on (about Allen):

“He was the hardest working poet on earth, always accessible to any young writer or poet, looking for guidance. And now he is gone. But his words will never die, and the gentle thunder of his voice rings eternal. Few poets wielded the kind of power Allen possessed. He was Zeus tossing words of lightning down from Olympus, like so many raindrops. I was lucky enough to have been caught up in a few of those storms, at least for a little while.”

Allen Ginsberg with Peter Orlovsky on the cover of Evergreen Review, August 1970

Jesse Monteagudo‘s comprehensive survey, last month, for Gay Today , “The Death of the Beat Generation” (sic),  is another must-read.

“Though the San Francisco poets were the first to write about their homosexuality – (Robert) Duncan’s “The Homosexual in Society” was published in 1944 – it was Allen Ginsberg who made queer sex a major component of Beat literature. Part of “the homosexual tradition in American poetry” that began with Walt Whitman, Ginsberg was connected to Whitman as only men-loving men could. In his Gay Sunshine Interview Ginsberg told Allen Young that Cassady, a former lover, “slept with Gavin Arthur, who slept with Edward Carpenter, who slept with Whitman,” thus establishing a sexual link between the two poets.”

“More than any other work, it was Ginsberg’s “Howl” that made homosexuality, both overt and sublimated, the hallmark of the Beat Generation. Its “description of gay male sexuality as joyous, delightful, and indeed even holy turned contemporary stereotypes of homosexuality upside down,” (so)  wrote John D’Emilio in Sexual Politics, Sexual Communities. “’Howl,’ along with other poems in Ginsberg’s first collection, offered gay male readers a self-affirming image of their sexual preference. And, as the San Francisco writer most clearly identified as ‘beat,’ Ginsberg served as a bridge between a literary avant-garde tolerant of homosexuality and an emerging form of social protest indelibly stamped by the media as sexually deviant.”

The legendary hip comedian Lord Buckley died on this day, (November 12, 1960). If, for some reason you are unfamiliar with him, you can find out plenty more about him – here