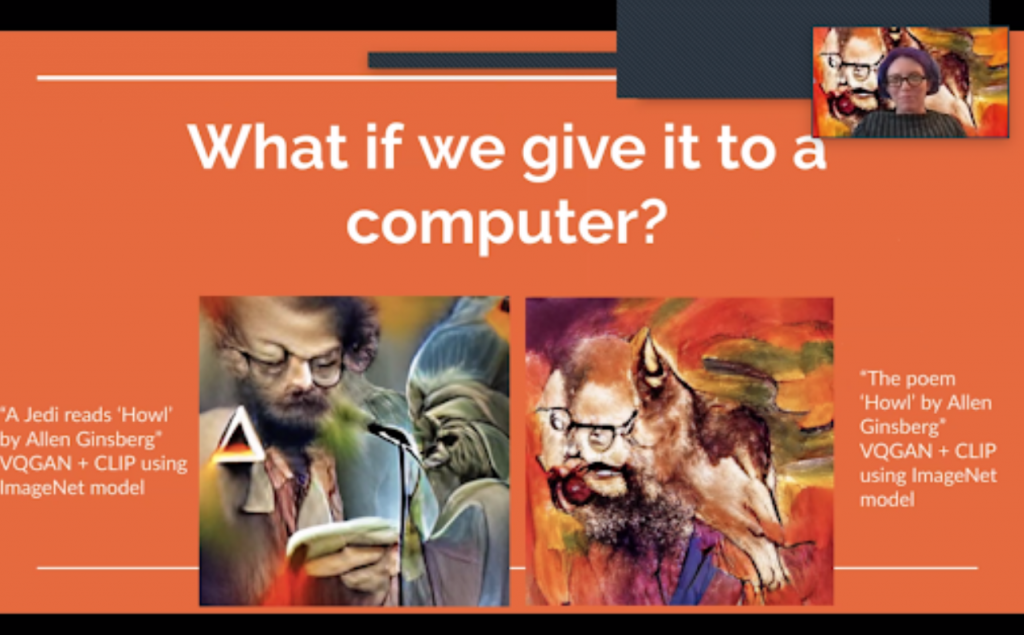 We’ve had postings on Artificial Intelligence before – see here – but we didn’t want to let this report pass you by – Leyla Yilmaz in the Stanford Daily, reporting from Stanford University, on last Monday’s Zoom presentation, “The Beats Within –  Comparing AI & Human Adaptations of ’Howl”

Organized by Stanford Libraries, the presentation “explored different interpretations of Allen Ginsberg’s iconic poem “Howl” by both foreign language translators and artificial intelligence (AI) systems”
Regarding the  former, Yilmaz quotes Stanford Librarian/Curator, Kathleen Smith, – “It’s an incredibly difficult poem to translate. It makes use of references, colloquialism, vernacular and different illusions. It’s an immensely challenging poem” – “Howl” in the title – Is that a verb or a noun? – The strict German translation, for example, would be “The Howl”,  which, as  Smith points out,  “has a distancing effect and raises (significant) questions about how we interpret the original language of the poem.”  Similarly,  a Hebrew translation “adds a biblical aspect to the poem that cannot be found in the English version”
This cultural context and, most importantly, the identity of the translator, can also affect, indeed defines, the translation. Smith cites, as an example, “the first ever translation of the poem by Fernando Alegría, “(imbued)…with underlying political meaning, because Alegría was an activist and the leading voice of the Chilean community in exile in the America”, (and Fernanda Pivano’s Italian translation, “which created a sentiment of anti-fascist resistance”
– and “the Polish translation, in which the word “queer” was translated as “odd,” rather than “gay,”) –  Smith further noted the essential point that “translations are not static — even translations of the poem in the same language can shift in meaning throughout time”.
Academic technology specialist, Quinn Dombrowski spoke on the software analysis process:  “It (the computer) takes all the knowledge that it has of English text and then fine-tunes the probabilities of different words based on the text that you retrain it on”.  Programs like GPT-2, VQGAN and CLIP were used to analyze the poem.
“Trained using texts of other poets or television shows (sic), Yilmaz writes , “AI generated its own translation and illustration of “Howl.” Some AI translations retained the poetic nature of the text, some added comical elements and one even produced a lyrical speech spoken by Jabba the Hutt(!)..(but) not all of the AI interpretations were engaging — some were repetitive or nonsensical. Others reflected human bias and discrimination. These versions occurred because the training data had human “biases baked into the algorithms,”, as  Dombrowski explains -“While AI can be hilarious to laugh at, it’s worth being wary and thoughtful before adopting it in any way as a substitute for human judgement or even as a supplement to it,”
Leyla Yilmaz: –  “These biased iterations showed that although we live in a society that is becoming increasingly reliant on AI, it is important to remember that our systems can be faulty. The computer does not actually know anything other than what it has been fed.”