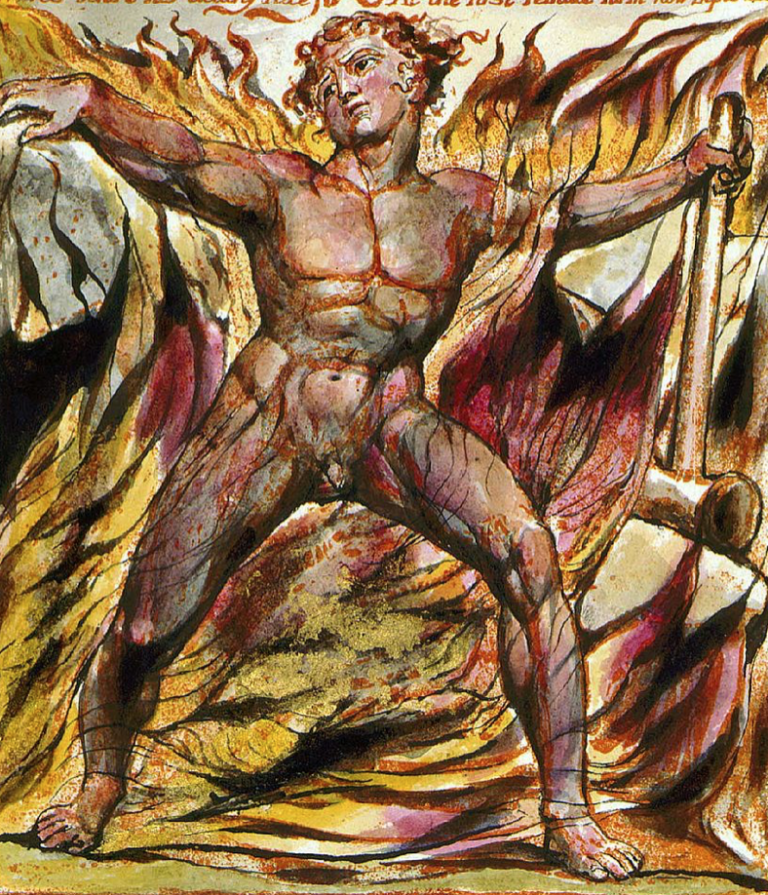 William Blake – Los – illustration from the Book of Urizen (1794)

AG: Okay so he’s built, (by) page three-fourteen, his Golden Hall (“The golden Hall of Urizen whose western side glowd bright..”)  Now enter Los and Enitharmon observing what’s become of Luvah, observing what’s become of their parents – ” Los joyd & Enitharmon laughd, saying  Let us go down/And see this labour & sorrow; They went down to see the woes/Of Vala & the woes of Luvah, to draw in their delights/The King of Light..” – (Urizen) “…beheld her – ( Vala) – mourning among the Brick kilns” – (That’s kind of interesting –  Urizen beheld the natural world mourning in the industrial landscape, is the way I interpreted that line – The King of Light beheld her  mourning among the Brick kilns compelld/ To labour night & day among the fires…”)

Student:  It’s probably some reference there to the way the Jews were made to build bricks when they went to Egypt, bonded into (Egypt).

Student (2) :  Like,  right above that it’s an echo, it seems to echo a little bit Milton’s Paradise Lost where Eve wanders off from Adam and wants to do her work alone, and when she goes to do that she’s seduced by the serpent.
AG:  Right.
Student:  And here they’re divided and that’s when they feel like they’re not wanted any more …. but just division.

AG:  Now, Vala has a speech in which she says – ” I see not Luvah as of old I only see his feet/Like pillars of fire travellin thro darkness & non entity/The times are now returnd upon us, we have given ourselves/To scorn and now are scorned by the slaves of our enemies/Our beauty is coverd over with clay & ashes, & our backs/Furrowd with whips, & our flesh bruised with the heavy basket…” – It sounded to me like a workman’s song or refrain in slavery to industry, actually.

So she doesn’t see Luvah as of old, but only his feet.  I guess just the imprint of the energy put into the Industrial Revolution and to the Urizenic formation of all that energy into slave labor and palaces for the king or capitalists or controller or tyrant.

“Then, Los and Enitharmon begin making a plot, (at the bottom of the page) – “And Los & Enitharmon joyd, they drank in tenfold joy/ From all the sorrow of Luvah & the labour of Urizen/And Enitharmon joyd Plotting to rend the secret cloud/To plant divisions in the Soul of Urizen & Ahania..” – (So they come in and out several times, and they’ll come in stronger and stronger.

As (G.E.) Bentley, who edited the whole original manuscript into a giant book, points out, more and more the hero of The Four Zoas seems to be Los.  Though there’s supposed to be an equal analysis of the four powers, the Savior and active agent that emerges is Los.  And so more and more attention is given to Los.

Where shall we go from here?  Looking out of the mundane shell or out of Urizen’s Golden Hall, on page three-hundred-and fifteen of Erdman, page 33 (of) Blake, line five -” “For many a window ornamented with sweet ornaments/ Lookd out into the World of Tharmas, where in ceaseless torrents/His billows roll where monsters wander in the foamy paths..” – (As you remember, the world of Tharmas had been drawn out into a watery chaos. The world of the body had become a watery chaos. And so from the rational palace you look out into the actual body and you see a watery chaos in that spot).

Then, in the following passage, you get some idea of the reason for it all, or how Luvah ultimately is linked with salvation, or with the Lamb – “On clouds the Sons of Urizen beheld Heaven walled round/ They weighd & ordered all & Urizen comforted saw/The wondrous work flow forth like visible out of the invisible” – (That “like visible out of the invisible” is kind of interesting.  It’s sort of like that line – “Mighty was the drought of Voidness to draw existence in.”

“For the Divine Lamb Even Jesus who is the Divine Vision/ Permitted all lest Man should fall into Eternal Death..” – (So all this is permitted as part of the progression outlined in the Seven Eyes of God when all the seven stages of experience were big mistakes, necessary as sort of steps toward abolishing the entire system and the emergence of unconditioned, un-Urizenic mercy).

“For when Luvah sunk down himself put on the robes of blood…..”

tape here concludes but to be continued