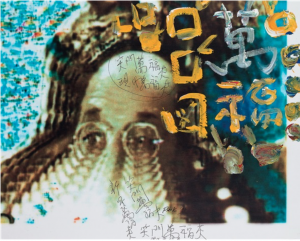 We’ve been focusing all this week (and will continue) on William Blake and on transcription of Allen’s August 10 1979 Naropa class on Blake’s The Four Zoas. We’ll conclude transcription of that class today (with more to come)  also noting a brief request from Korean video master Nam June Paik who was in attendance in the class, filming it

AG:  Okay, ten of.  I guess we should be able to conclude Book Two and zap through Book Three next time.
Steven Taylor (also present in the class):  Allen.  The whole class (is on hiatus next week)
AG:  Yeah.
Student:  Are we going to meet the Monday after…
AG:  If we can, that’d be alright.
Steven Taylor:  Tuesday is the last day of the session, right?
AG:  Is it?  I don’t know.
Steven Taylor:  So there would be a class Monday.
AG:  Okay.  Monday is the 20th?

Audio for the above can be heard here,  beginning at approximately ninety-five-and-a-quarter minutes in and concludes at the end of the tape