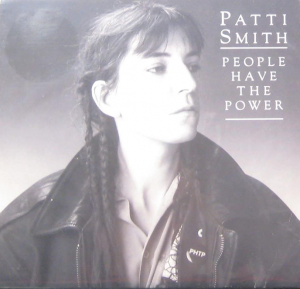 It’s Patti Smith‘s birthday today – “The People Have The Power” –  The people have the power/to redeem the work of fools”.
Here’s Patti, out on the streets, this past November, tirelessly spreading the word.

Patti, interviewed this past Tuesday in The Guardian

Patti, interviewed by Kate Kellaway, September 20, in The Guardian:

“I’ve never experienced such a traumatic year. Every day I feel sickened, partially because of the atmosphere that the president has infused into our country: we’re more divided than ever. I feel the unrest of the world in the pit of my stomach.”

And from her interview with Steve Baltin for Forbes, (similarly, just prior the election):

“We have two simultaneous, historic situations that we as a people have to face. And the only way we’re going to get anywhere, combat or rise above it is we are going to have to unify….We’re gonna have to unify globally. We have to unify as Americans, as a people. We are in a very divisive situation. We’ve been living for the past few years in an administration that is all about division, dividing us. Never in my life did I think about red states and blue states and republicans versus democrats. I’ve never thought like that. I’ve gravitated towards certain things. We are being primed and our young people primed to divide and we’re not gonna make it unless we unify. So I believe we can do it.  In my song ‘People Have The Power” I wrote, ‘I believe everything we dream can come to pass through our union/we can turn the world round/We can turn the earth’s revolution.’ And I still believe that, but only if we unify as a people.”

and Patti on climate change:

“Doing what we have to do to be prudent is paramount, but we have another pandemic and that obviously is the climate change pandemic. And it’s ravishing our world and people are suffering all over the world on top of being concerned, worried and prudent about the virus, people are also suffering famine, starvation, locust plagues, fires, the loss of species. So we have to really think about this.”

Check out also this interview, from this past October with Jacob Uitti for Interview magazine

“I’ve always thought of poetry as being one of the highest and most difficult arts. It’s very solitary. It’s often quite difficult, difficult to interpret. It contains such great beauty and cosmic or alchemical thought. Poetry is a difficult vocation. To be a poet is probably one of the most thankless ones. Very few poets gain recognition. The struggle to write poetry……. it’s a difficult vocation. But one, I think, that is elevated. An elevated vocation.”

So we’ll forgive her (she forgives herself) for this – back in 1974, telling Bob Dylan, “I hate poetry!’ – (“I acted like such a jerk, I don’t know what came over me..”) as she confesses to “Tonight Show” host Jimmy Fallon, on late-night tv earlier this year. 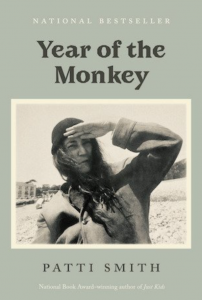 Patti:  “…the way that we work is so unique…. it allows me to use one of my best assets as a person who likes to improvise and as a reader. And..Stephan..is a global traveler, more than me, I’m a traveler, but I’m a vagabond literary traveler, where he is an adventurer. He is a mountain climber, he goes to dangerous places, and he gets these incredible soundscapes from the exact places that these poets lived or are dreaming of or accessing in their poems. So there is such an authenticity to the tracks and it’s inspiring. We go into a little studio in Paris, he plays these amazing tracks. It’s amazing, the diversity of sound and tones and I just improvise over it and read over it.”

“These poets”, a triumvirate of poets  – 2019 saw The Peyote Dance based on the work of Antonin Artaud – This year sees two releases – Mummer Love, based on Arthur Rimbaud (a very particular Rimbaud, of the late years, of his time in Ethiopia),  and Peradam, which lifts words from Mount Analogue, the posthumously-published “symbolic”, “non-Euclidean”, novel by René Daumal.

The annual Patti Smith birthday concert (quite an institution) regrettably, due to the pandemic, will not be taking place in the concert hall this year, but, not to let anybody down, Patti will be conducting a live-stream concert/performance live-streaming tonight –  9 p.m. Eastern Standard Time (6 p.m. Pacific Time) –  via Veeps. Tickets from here
The webcast will be filmed by longtime Smith friend, filmmaker Steven Sebring.  Patti will perform with her band, which includes longtime bassist Tony Shanahan and her son Jackson on guitar, among others.