Irving Rosenthal was – and is – an extraordinary figure. We would draw your attention to a piece by Philippe Aronson (the French translator of his “deeply weird and wonderful”  1967 “novel”, Sheeper), “Tracking Down My Literary Idol to a San Francisco Commune”, that appeared on Literary Hub in August of last year.  Also valuable is Alastair Johnston‘s piece in Reality Studio from the year before, “Irving Rosenthal – Your money or your life“

Rosenthal, was, of course, the key figure in the publication of Naked Lunch, editor at Chicago Review, and later, when he was so flagrantly censored, editor and publisher of Big Table

“We know from Sheeper”, Johnston writes, that Rosenthal had a difficult relationship with Ginsberg when he wrote: “Because when I faced Allen under ether I saw he loved me exceedingly, but my facing him stopped that love in its tracks, built a wall around it that will never be scaled.”

The principal issue has to do with ego, with “careerism”  – As Rosenthal wrote in his 1981 text Pros in Poetry:

“When a poet chooses to make poetry a career, he or she has made a shift in vocation as drastic as that made by a dressmaker who ends up a plumber. For careerism is a vocation in itself, with its own set of skills (like grand-standing, back-rubbing, glad-handling, image-cultivating, homage to the powerful, sexual openness in the right direction, and so forth). Most careerists don’t want it noticed how hard they work to publicize themselves, because naturally that effort reflects on their talent. They want to be known as brilliant poets not grinding careerists…”….”Allen Ginsberg is the limiting case of a poet who has achieved “name, fame, and shame of money” by genius of personality promotion, public relations and celebrity pursuit. To give credit where it’s due, if there is such a thing as a poet of publicity ( like poets of military strategy or high finance) then Allen is it. His knack for attracting, not to say controlling, reporters, writers and photographers ranks with that of Lindbergh or Zsa Zsa Gabor. Luckily for us, he is a generous compassionate man, and has seen fit to share his spotlight with good causes and interesting upbeat friends….Allen carries his egomania into the media with such comic sense and aesthetic control that it often comes out a kind of wonderful joke, like the routines of Harpo and Chaplin..”

Rosenthal, early on, exited himself from the literary rat-race and pursued a life of communal living. (He founded the Kaliflower Commune (The Friends of Perfection Commune, originally the Sutter/Scott Street Commune) in 1967.  The Kaliflower Newsletter, an “inter communal newspaper” appeared over a period of three-plus years, starting in 1969.

We are immensely grateful to Eric Paul Noble, archivist for Diggers.org (shout-out to the Diggers!)  for providing a number of illuminating representative selections (We are also grateful to Steve Silberman for alerting us to this work)

Among the trove of now-reprinted articles – (from Vol.3 no.17, August 17, 1971), “Interrogation of A Businessman by the Interior Police” –  “Star” (Allen Ginsberg) interviewed by “Crescent” (Irving) – See here

Great gossip. Real news. Too much to summarize here, but (do yourself a favor) and go read it.

As Steve Silberman notes,  “It’s an extraordinary interview in several respects. Allen mentions that he slept with Jean Genet in Chicago, which I believe was previously unknown..Irving’s observations of Allen’s “caste system” among his literary friends are spot-on, and address aspects of Allen’s trip that I’ve never seen described so well. There are also more details about Allen cutting off his beard at Trungpa‘s request than I’ve seen anywhere else.”

Here’s a photo (from the Big Table era) of Allen and Peter and Irving. 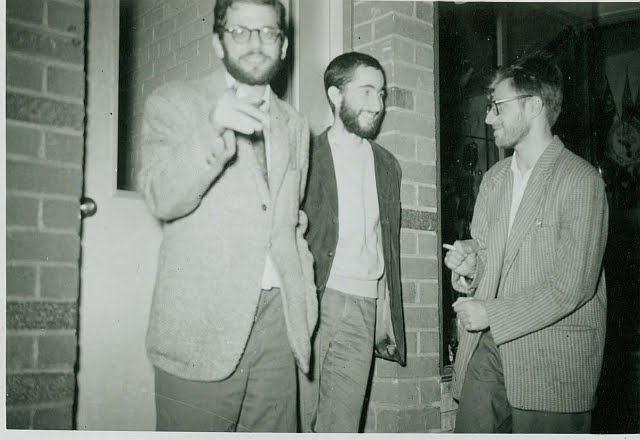