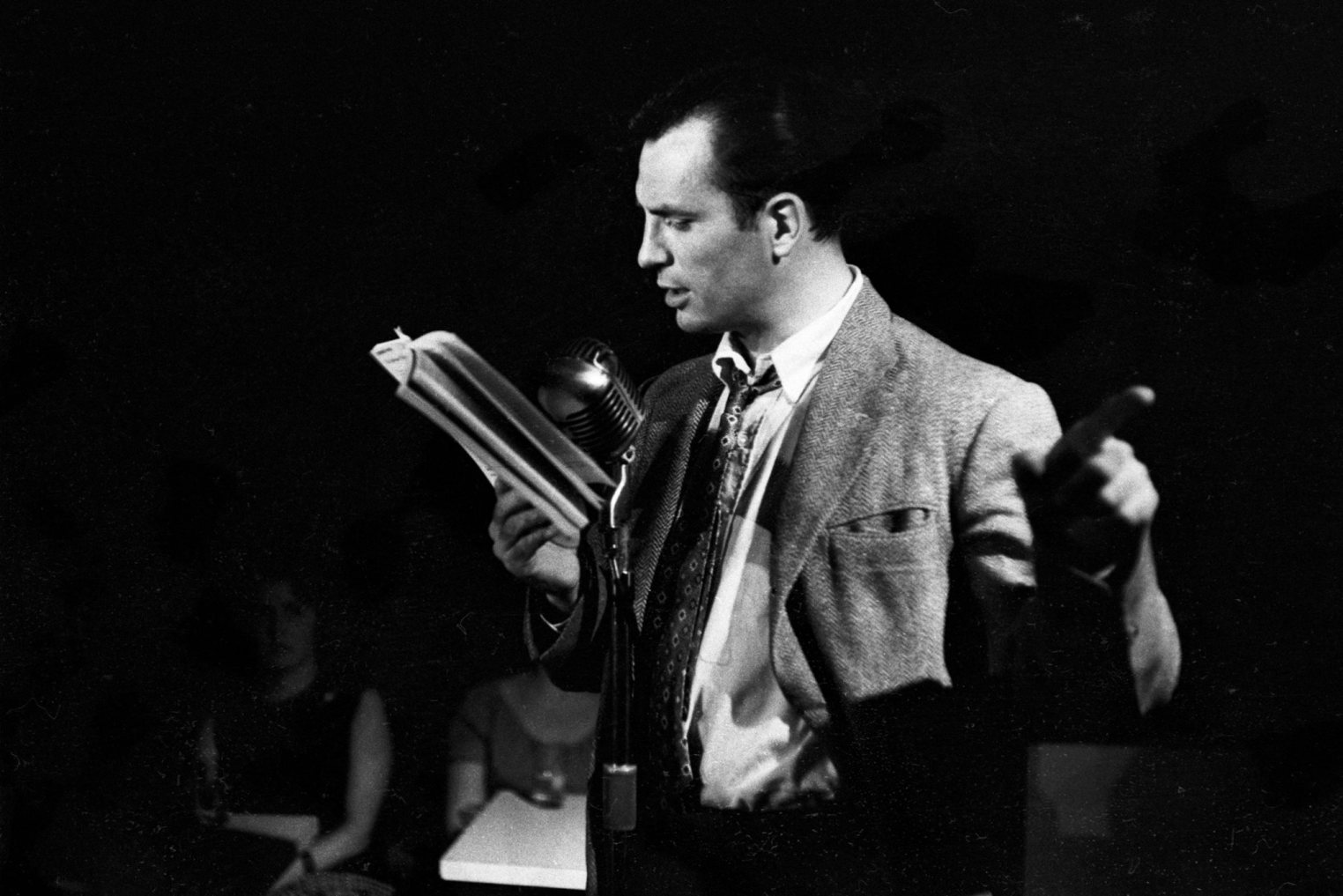 Jack Kerouac‘s birthday today.  Happy Birthday Jack!  He would’ve been a remarkable old man, ninety-eight years old! (yes, that’s right, in a couple of years, the Centennial is coming up). Choosing today to spotlight on just one facet of his genius – his voice – and, courtesy, once again, of the extraordinary Stanford Ginsberg archives, we’re featuring a transcript of Sarah Spitz‘s NPR report (on “All Things Considered”)  from back in 1990, on the occasion of the release of The Jack Kerouac Collection, the Rhino Records boxed-set. 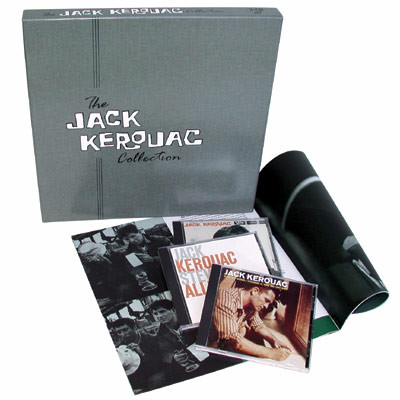 Intro:  Jack Kerouac, father of the Beat Generation, began writing what he called “spontaneous prose” in the early 1950s. It was an attempt, as Kerouac put it, to capture “the truth of a moment”  Kerouac had his critics. To  Truman Capote, spontaneous prose wasn’t writing, it was merely typing. But the sounds of Kerouac’s work is central to Kerouac’s prose, and now, for the first time in three decades, Kerouac’s fans have the chance to hear how the author himself thought his writings should sound. Sarah Spitz of member station KCRW (Santa Monica) reports on the reissued collection of Kerouac’s long-out-of-print recordings.

SS: While poet Allen Ginsberg is credited by some with revolutionizing American poetry and the way it’s heard at readings. He cites Jack Kerouac as the master:

AG: “Kerouac’s greatness was as a vocalizer of his own writing and once you hear his voice then its forever printed when you read his page because then you can hear him talking and you realize the nature of the sentences and the nature of the mind.”

“I saw in the clouds huge and massed above the fiery golden desert of eveningfall the great image of God with forefinger pointed straight at me through halos and rolls and gold folds that were like the existetnce of the gleaming spear in His right hand, and sayeth, Go thou across the ground, go moan for man, go moan, go groan, go groan alone. go roll your bones alone..”

SS: Allen Ginsberg describes Jack Kerouac as a word musician and in fact Kerouac was devoted to jazz, whose sounds and rhythms he tried to translate into writing.

Gerald Nicosia is the author of Memory Babe, a biography of Kerouac. 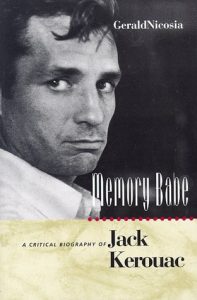 GN: I mean if you listen to Charlie Parker, Lester Young. They’re really having fun. It’s as if they’re having a long monologue and they’re talking into the saxophone and Kerouac got a lot of that. I mean, he wanted to do that with language, to make.. to just make the sounds come out, make the words bump against each other and jump around.

“..suddenly Dizzy spats his lips tight-drum together and drives a high screeching fantastic clear note that has everybody in the joint look up – Bird, lips hanging dully to hear, is turning slowly in a circle waiting for Diz to swim through the wave of the tune in a toneless complicated wave of his own grim like factories and atonal at any minute and the logic of the mad, the sock in his belly is sweet, the rock, zonga, monga, bang.”

With the 1957 publication of On The Road Kerouac’s growing literary fame earned him  an invitation to read his poetry at the legendary New York jazz club The Village Vanguard.

Steve Allen,  the television personality and jazz pianist was both a fan and penpal of Kerouac. He went to hear the writer at the Vanguard.

SA: He read his poetry, that’s all he did without too much preamble or explanation, and the experience was not very successful for him in the first instance. I guess half the people in the room, which wasn’t crowded anyway, didn’t know who he was, and the others just nodded respectfully, they weren’t given the opportunity neither to applaud nor to laugh since he was saying nothing funny so it was a pretty dreary half hour or so.

SS: Allen offered to accompany Kerouac for his second set and it was this pairing that inspired jazz producer Bob Thiele to record Kerouac reading his own work. 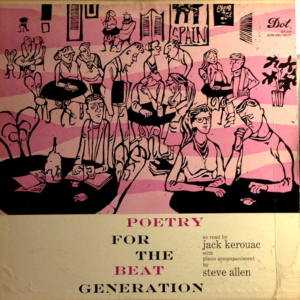 BT: What sort of knocked me out if you will was his sense of timing. Jack’s readings almost flowed as though he were swinging (I mean, musically that is). I mean, once you heard the voice , it was just like hearing, say, Coleman Hawkins or Louis Armstrong for the first time, (once you hear their sound which is so recognizable – so, in fact was Kerouac’s voice).

”…they’ve got to catch 130, 132, 134, 136 all the way up to 146 till the time of evening supper in homes of the railroad earth when high in the sky the magic stars ride above the following hotshot freight trains–it’s all in California, it’s all a sea, I swim out of it in afternoons of sun hot meditation in my jeans with head on handkerchief on brakeman’s lantern or (if not working) on book, I look up at blue sky of perfect lostpurity andfeel the warp of wood of old America beneath me..”

SA: He arrived with a very poor looking little suitcase, the kind that literally are purchased at dime stores not even at luggage stores. It looked as if it was made of leatherette or pastboard or something. And when he opened it (he put it on a piano top and opened it) there was a bottle of wine which might have been Thunderbird (very cheap wine in other words), and a big roll ( I learned at that time that he used to do a lot of writing on paper rolls instead of separate sheets as most writers do). And then maybe 57 little tatters and scraps of paper (some of them very tiny, some larger, but the whole case was disorganized).

SS: Allen says he and Kerouac approached the recording like a jazz jam session with no rehearsals, each piece done in one take.

” I keep falling in love/ with my mother/ I dont want to hurt her/ – Of all people to hurt/  Every time I see her/she’s grown older/But her uniform always/ amazes me/for its Dutch simplicity/And the Doll she is/The doll-like way/she stands/Bowlegged in my dreams/  Waiting to serve me./ And I am only an Apache/ smoking Hadshi/ in old Cabashy/ by the Lamp.”

SS: Such references to illegal substances were just one reason why the President of Dot Records demanded that producer Bob Thiele stop distributing “Poetry For The Beat Generation” and get any stores that already had the album to return it.

BT:  Of course, when I asked him why?,  he said that it was, yeah, you know, practically pornographic, and profanity was involved, and he wouldn’t let his son listen to the record, and I sarcastically told him that the record really wasn’t made for his son to listen to, it was made for an adult audience.

SS: So Thiele and Steve Allen formed their own label, obtained the masters and released the record themselves. Its success led to a second album, Blues and Haikus. For this session Kerouac asked to be accompanied by his favorite tenor saxophone players Zoot Simms and Al Cohn. 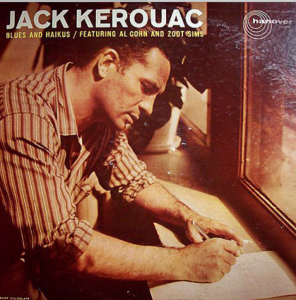 “In the morning frost/ the cats/ Stepped  slowly”

SS: Like most musicians hired as accompanists for a studio session Simms and Cohn packed their bags and left as soon as the recording was completed and producer Bob Theal says Kerouac also disappeared after the session.

BT: Finally I went back to the studio and in the corner he was, on the floor, you know, leaning against the wall in a sitting position with his head in his hands, crying. I said, “What is the matter, Jack?, what’s the problem?”  And he couldn’t believe it, he said “My two favorite musicians walked out on me and they wouldn’t sit around and listen to the playbacks with me.

SS: Kerouac left little more than his voice as a legacy for his daughter, Jan, a writer herself. She put together a tribute to her father for the booklet that accompanies the reissue of his recordings. She says she saw her father just twice and in those meetings he spoke no more than 50 words so these recordings mean a lot to her.

JK: I was just delighted. I mean, I still am. It just remains the same . It’s just the certain delightful quality about his voice and personality and he’s somebody who that I really.. that I would have liked to have known.

SS: Kerouac made three records at the height of his career in 1959.By the time of his death  ten years later they were out of print. Rhino Records has reissued them along with studio outtakes a lecture on the Beat Generation and the audio of an appearance by Kerouac on Steve Allen’s tv show. For NPR I’m Sarah Spitz in Los Angeles.

More on Kerouac and music 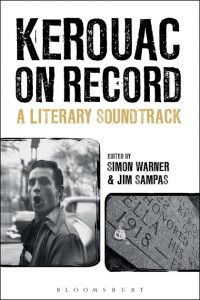