Robert Frank and “The Stone of Kindness” 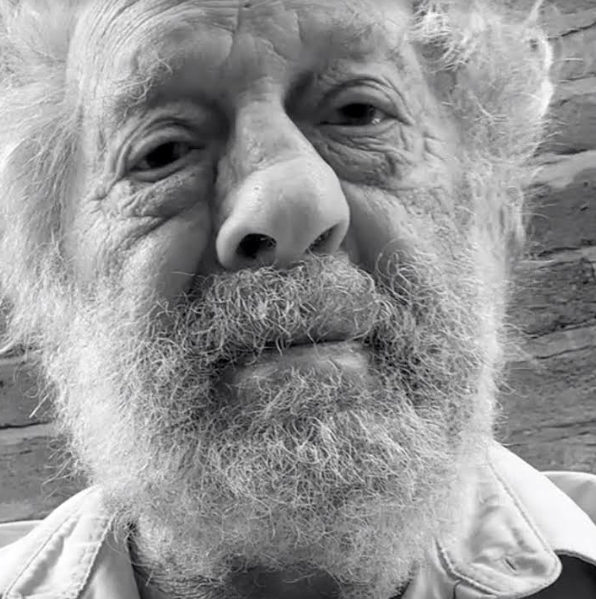 Today would have been the 95th birthday of Robert Frank, the great American photographer and filmmaker and Allen’s dear friend, who passed away this past September. Much heralded, much missed.

In memory of him, we feature today this extraordinary account by our good friend Ethan Neville, who met up with him, fortuitously and serendipitously, shortly before he died. 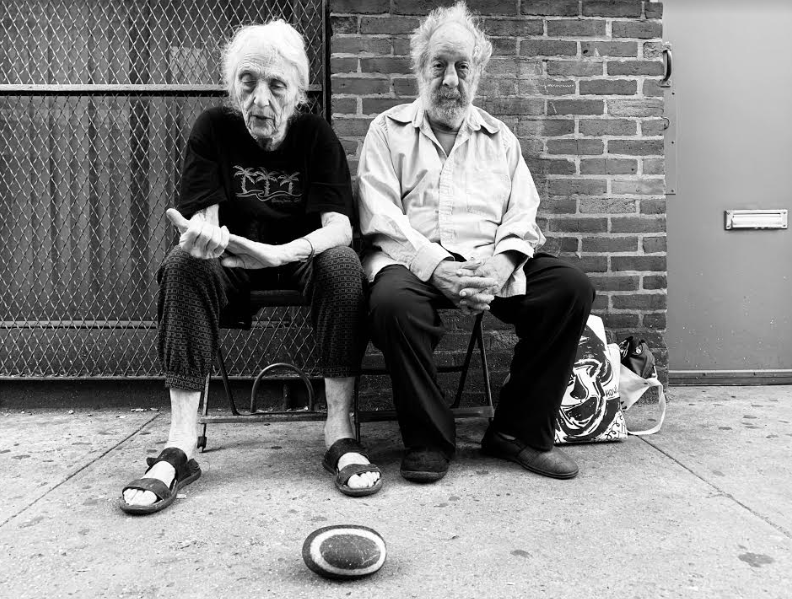 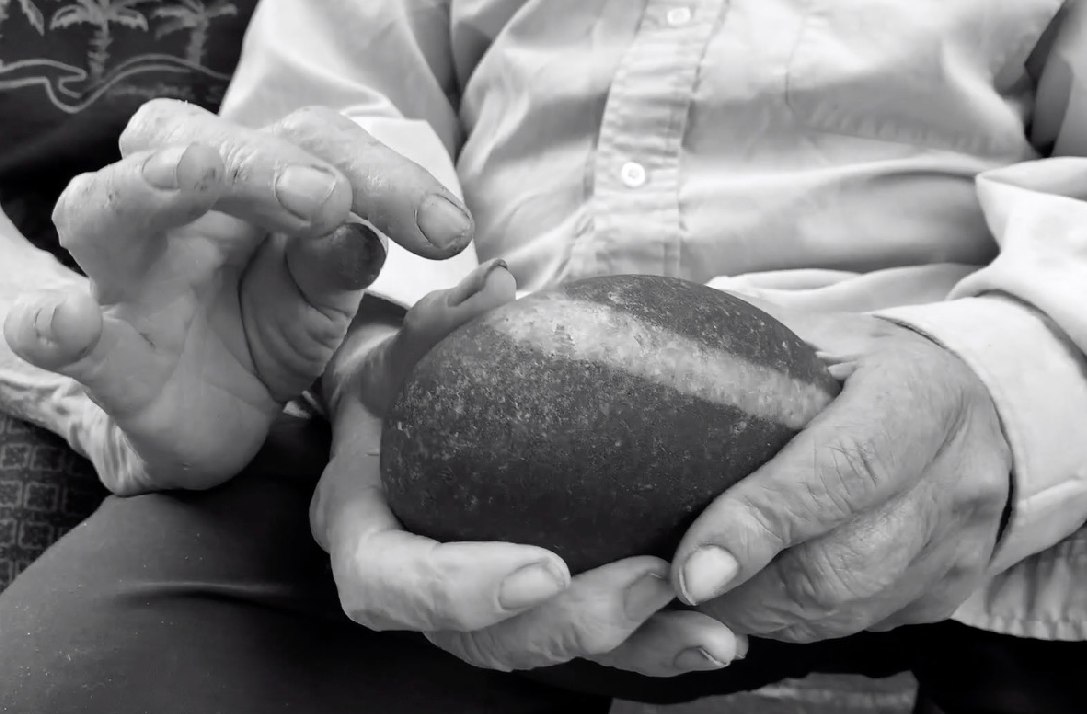 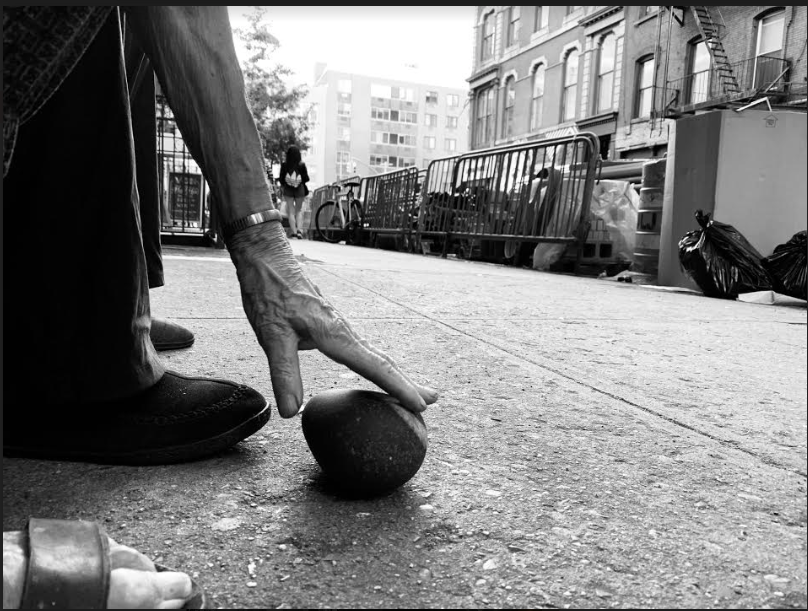 In celebration of Robert Frank’s birthday I would like to offer this chance-meeting story, one part of a many-faceted project based on a stone I found on a beach in Cape Breton, Nova Scotia and carry with me around the world to engage with people in an effort to create connection, kindness, and community.

In the spring of 2019, I was in NYC taking portraits of strangers and friends holding the Stone of Kindness to add to my ongoing portfolio for the Stone of Kindness project. Often I rely on pure serendipity along with a sense of receptivity and rightness to find my subjects. This story began right after I walked out of the “overthrow“ boxing club, which had once been home to Abbie Hoffman and the Yippies, and saw a man who caught my eye and heart. He was wearing a tank top with a large “O” on the front, and responded warmly when I asked to take his photograph with the Stone. He turned out to be Mani Love, the shortest Harlem Globetrotter basketball superstar in history! We spoke about photography. I mentioned that the great photographer Robert Frank lived somewhere nearby and that it was my dream to meet him, and maybe even take a portrait of him with the Stone. But I really had no idea or where he lived.

Mani’s face lit up. “Robert is just two doors down and he often sits in his second story window at this time of day. You should go over there and hold the stone up and see if he might be coming down tonight!”

So I found myself standing on the sidewalk in the early evening sun and there indeed was the legendary Robert Frank sitting by his the second-story window looking down, a ghostly but very real figure outlined behind an old screen. I held up my Stone from Cape Breton and asked him if he might come down sometime to meet it, and me, and he yelled that he’d be down in a half an hour. Am hour later, his wife the fine American abstract artist June Leaf came out with two chairs, and then Robert appeared.It was both wonderful and ordinary, meeting them. I felt a sense of familiarity almost like seeing old family.

June was luminous, engaged like a wonder-filled child. They both enjoyed the Stone of Kindness. They were so open and curious, a quality I believe is the most essential ingredient for an artist. They sat and allowed me to take their portrait with the Stone of Kindness, fully connected to its meaning and symbolism and spirit. Awhile afterwards, June got up and said she was going upstairs to have a glass wine and asked if I would please sit in her chair with Robert. And I knew that this was a grand honour, to sit in the Queen’s chair with arguably one of our great Kings of photography and media arts.

It’s a strange thing to be sitting next to a hero, who is also an ordinary man comfortable in the world and with his place in it, a man who would say hello to almost everybody who walked by, who was unfazed by the people who just hurried along past, but whose eyes would light up when he’d received a smile or a nod in return. We talked about the tree that he and June had planted many years ago and how amazing it was that it was still right there in front of us, growing and pushing up the sidewalks of New York City.

We sat together on a perfect sunlit evening when the magic light begins to dance across and through the streets of New York City with that brassy copper-gold color that is only found in NYC, I felt so deeply humbled. I was enveloped by a sense of utter peace and stillness, a brilliance of open heart in the midst of all the frenzy passing us by. This brilliance emanated from the man beside me, who felt like a kind of grandfather, and who also shared so many heroes (friends, to him) in common with me, from Allen Ginsberg, to Harry Smith, to Anne Waldman, to Gregory Corso and the glorious Patti Smith.

I felt blessed that I was kindred to this remarkable fellow traveler-human, and that we were both of us bedazzled by the infinite beauty of just being there, together.

We shared this beautiful dream sitting in the fading light on Bleecker St. a timeless space, and then it was time to move onto the next dream. I helped bring in the chairs and also helped Robert up the first step, which he was having trouble with because it was a good three inches taller the other steps. I called up to June, “should I help Robert the whole way up?”

And indeed he was. He climbed the steps and that was the last I {ever} saw of him.

I know with my gut and in my heart that Robert Frank has stepped into an illuminated space which he already knew. He was AWAKE to the ordinary magic of this sacred world as few are, and he has left us glimpses of the timeless etched in silver halide, and moving celluloid stories that reveal our strange, shared humanity. Somehow, he had the courage to step fully into heart-breaking beauty of this myriad world with all it’s deep shadows and wild dancing highlights.

After my adventure with Robert and June, I went next door for a glass of wine. And there was a gentleman sitting at the bar reading Ginsberg’s “Kaddish“ and he led me into another adventure into the beat of the city that never sleeps!

We are a grand old family with our tattered hearts of many colors.
May we find our humanity, poetry and beauty amongst all the dark and the light. 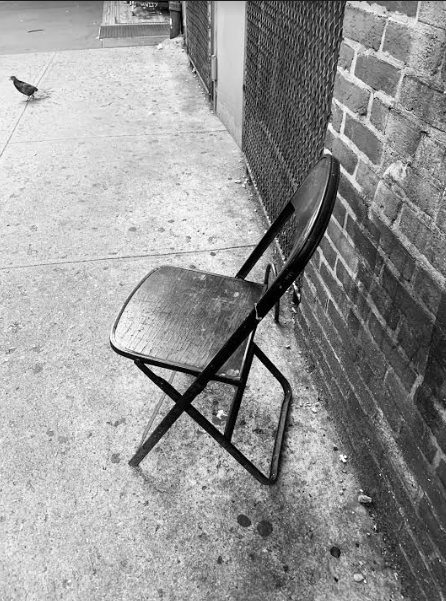