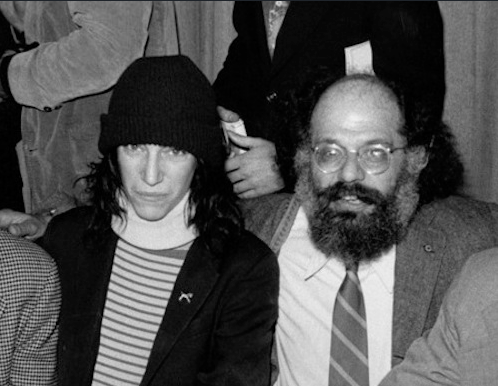 Patti Smith in New York City in 1977 with Allen Ginsberg – the neck-brace the result of her falling off the stage in Tampa, Florida, and breaking her collar-bone earlier that year 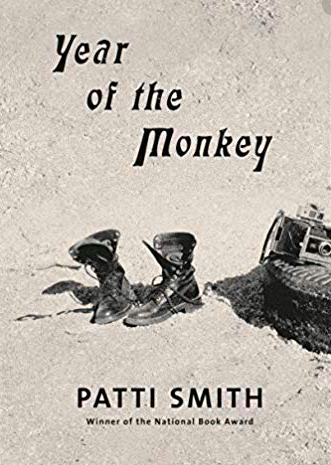 Patti Smith’s new book, out this week, Year of the Monkey (2019) – the year is 2016, coincident with her celebrating her 70th birthday

Patti Smith, in her new book, Year of the Monkey, on Allen and how he might have responded in these trying times:

He “would have jumped right in, using his voice in its full capacity, encouraging all to be vigilant, to mobilise, to vote, and if need be, dragged into a paddy wagon, peacefully disobedient”.

Year of the Monkey, beginning on New Years Day 2016 and ending a few days after Donald Trump’s inauguration the following January, is a kalaedoscopic meditation on a variety of things, not the least of which, Allen (and Allen’s poetry – she carries a book of his poems along with her in her travels and describes it as an ““expansive hydrogen bomb, containing all the nuances of his voice.”)

Check out this interview (in Variety magazine) :

“When asked whether the Beat poetry world she inhabited in the 1960s and ‘70s was too much of a boys’ club, Smith said, “I don’t know — I was in it! I never thought about that. These people I got to know as my friends and mentors — William Burroughs, Allen Ginsberg, Gregory Corso. They treated me really well when I was a girl working in a bookstore, writing poetry, and they became good friends as I got older and they were kind to my children. I never felt excluded

“The Beats were all quite educated,” she said. “They all had gone through the Romantic poets and European literature and Rimbaud, and they had all this information — and the influence of jazz, with Kerouac writing while listening to jazz. They were all so evolved and intelligent their work was not just revolutionary — it had substance that we’re still plowing through. And it’s not like Allen Ginsberg popped up out of nowhere: He vigorously studied William Blake and Walt Whitman, and he also loved the Beatles. All these great teachers were his spiritual icons and they are all seeded in his work. And they all fought a lot of fights for us, censorship battles and (things like that). They weren’t just workers and revolutionaries; they were teachers, and because many of them lived for a long time, we were privy to their teaching.”

She  appeared last night at the Congregation Beth Elohim in Brooklyn in celebration of the book’s publication.

& Patti on William Burroughs (from an interview ( a series of questions) appearing this week in The Financial Times) – “William Burroughs was a very good teacher. I learnt from him about how to carry myself, how to navigate life, about literature, about travel, but also about building one’s character.” 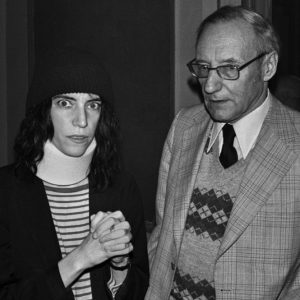 Burroughs on Patti (quoted in Casey Rae’s William S Burroughs and. the Cult of Rock ‘n Roll – see Greg Kot’s review of that book in the Chicago Tribune – &  Linda Levitt’s review in PopMatters – here)  – Burroughs had reassured her – “You have the whole punk generation, who are anti-heroes. See, they’re rejecting the old values, because having been woken up, they realize that all this nonsense that they’ve been brought up on is nonsense. And all these standards. So we could regard them, if you will, as something that you have been instrumental in creating”. – “The Godmother of Punk” – but Patti was having none of it, certainly none of the nihilism – “I don’t give a fuck. I don’t agree with these kids, I believe in heroes. See, I love these kids but I think I’ve spawned a lot of little monsters, though, sometimes. Because I don’t feel the same way they do. I don’t think it’s cool to shoot yourself up with heroin at 21 years old and die. I don’t think it’s cool to die at 21, you know.” 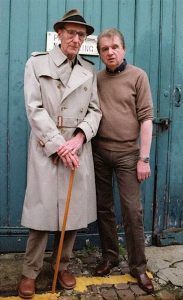 And coming up next week in Berlin – Speech Is Not Free – the 5th Speech Is Not Free Festival – “Through the looking glass of William S Burroughs and Allen Ginsberg” – three days of poetry, art, film & performance (from October 4th to the 6th).  Against a back-drop of William’s art and Allen’s photos (and paintings by Jean-Nöel Chazelle), presentations, (by Maria Teutsch, Brenda Coultas, Aliah Rosenthal, & others), film screenings, (by Yony Leyser – his “William Burroughs – A Man Within” –  and Istvan Eorsi & Gyula Gazdag’s 1997 Allen Ginsberg documentary, “A Poet on the Lower East Side..” –  and with special guest, Peter Hale).

Full details can be found here.    The event will be “live” on Facebook – see here 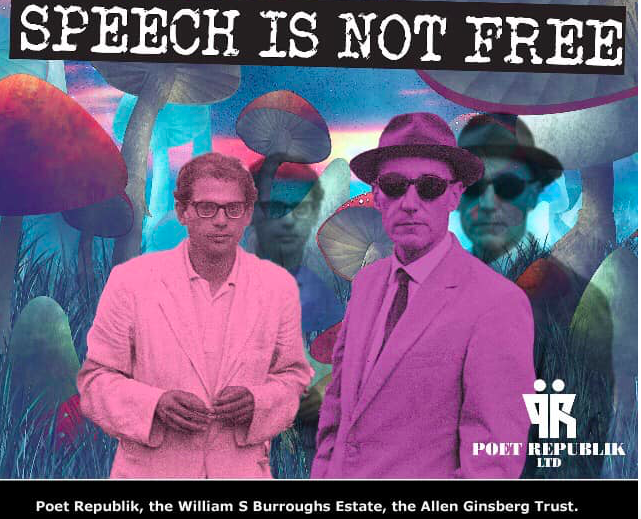