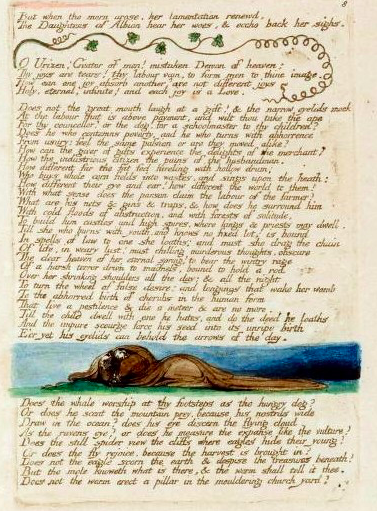 “… and must she drag the chain/ Of life, in weary lust! must chilling murderous thoughts  obscure/ The clear heaven of her eternal spring? to bear the wintry rage/Of a harsh terror driv’n to madness, bound to hold a rod/ Over her shrinking shoulders all the day; & all the night/To turn the wheel of false desire: and longings that wake her womb/ To the abhorred birth of cherubs in the human form/ That live a pestilence & die a meteor & are no more./Till the child dwell with one he hates and do the deed he loaths/ And the impure scourge force his seed into its unripe birth/ E’er yet his eyelids can behold the arrows of the day.” – (These are the damaged children of such marriages.  Damaged, neurotic, bastards, or hated children of forced marriage-compacted terror scenes.)

“Does the whale worship at thy footsteps as the hungry dog?” – (Now she’s turning back to Urizen again, talking to this principle of heavy, harsh reason.) – “Does the whale worship at thy footsteps as the hungry dog?/Or does he scent the mountain prey, because his nostrils      wide/ Draw in the ocean?” –  (That’s really a repetition of that same.. nostrils.. the whirled nostrils drawing in creation. Remember,  earlier?  – or is that?.. it’s somewhere in oneof these.. I think in (the Book of) Urizen, there’s that image of the nostrils drawing in the creation, as if the entire creation of smell and space were the by-product of the existence of the nostrils and not vice versa.) But “because his nostrils wide/Draw in the ocean.” – ( that’s kind of interesting for a whale –  the wide nostrils of the whale drawing in the entire ocean.

Peter Orlovsky:  Why does he say that:  “Does the whale worship at thy footsteps as the hungry dog?”

AG:  Well, I’m wondering.  I’m not sure.  ..till we get to it. I think she’s just pointing out that there’s a whole realm of nature not dependent on Urizen, basically.  That’s one thing. There’s some ironical double thing there.

And also there’s, like, a challenge, too.  It’s sort of double. It’s like Bromion‘s rhetorical questions, where you’re not quite sure he understands or not, when he says, “And is there not one law for both the lion and the ox?/ And is there not eternal fire, and eternal chains.”  In modern rhetoric, it would be, “Isn’t there..?” – “Isn’t there? Eternal fire? –  or, is it a big mistake?”. But I guess she’s saying, “Does the whale worship at thy footsteps as the hungry dog?” as a rhetorical question.  Let’s finish the paragragh and see.

“Or does he scent the mountain prey, because the harvest is brought in?/ Draw in the ocean? does his eye discern the flying cloud/ As the ravens eye? or does he measure the expanse like the vulture?/ Does the still spider view the cliffs where eagles hide their young?/ Or does the fly rejoice because the harvest is brought in?/Does not the eagle scorn the earth & despise the treasures beneath?/ But the mole knoweth what is there, & the worm shall tell it thee./ Does not the worm erect a pillar in the mouldering church yard?/ And a palace of eternity in the jaws of the hungry grave/ Over his porch these words are written. Take thy bliss O Man!/And sweet shall be thy taste & sweet thy infant joys renew!”” – ( Well, I understand that, because it’s going back to the imagery of (the Book of) Thel, the last few lines,  going back to the imagery of Thel talking to the worm.  Little Thel is saying, “I don’t want to be born,” and the worm in the clod of clay saying, “It’s alright, you can enter the good earth.”)

AG:  You’ve got the whale, the mountain prey, the flying cloud, the raven’s eye, vultures, still spider, fly, eagle, mole, then worm.  Back and forth in space.  Actually, I don’t know what the key is to those rhetorical questions at the beginning, except that I know they’re real powerful, Biblical, immense questions.

Then from here on in, it gets more pointed, as an accusation against Urizen, and as a proposition of open lust and ecstasy, in spite of him, or beyond him, or an exposition of the blight that he’s laying down on the body.

So this is concluded:

“Take thy bliss O Man!/ And sweet shall be thy taste & sweet thy infant joys renew!” –  (Because, the worm erects a pillar of prophecy, you know, of new life, renewed life, in the mouldering churchyard).

Where is that?  “Are not the joys of morning/ sweeter than the joys of night?”  Let’s see if I can find that. Because these relate to a series of poems that we should be going over soon, actually.