A brief film clip, one of the extras, from Jerry Aronson’s The Life and Times of Allen Ginsberg.  The speaker – legendary American avant-garde filmmaker, Stan Brakhage 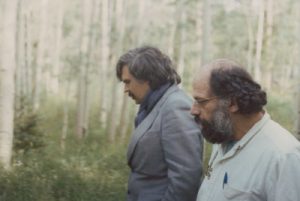 “This is by… is stated in several different ways by.. Tennessee Williams, in different plays, in several ways, and it is his main statement – “Nothing human disgusts me except deliberate cruelty” – and I’d like to live by that, I want to be good enough to live by that – and I think Allen was… “Nothing..”…   I  think he never was deliberately cruel, in my knowledge, to anybody.”

Brakhage’s engagement with the state of Colorado – and Allen’s too (teaching summers at Naropa) meant that the two were in close proximity.

Here‘s Brakhage at Naropa in 1975, in discussion, prior to showing some films. Here‘s Brakhage interviewed, on that same occasion, by Sharon Niederman for the program, “Open Secret”

Brakhage himself was an accomplished radio presenter (see “The Test of Time”, his radio broadcasts for the University of Colorado in 1982) – (A full transcript of all twenty shows can be found –here)

Brakhage can be heard interviewed by Pauline Kael, in vintage audio here, from circa 1964 (courtesy Anthology Film Archives)

Ronald Bergen in his obituary in The Guardian – “During five decades, Brakhage made nearly 380 films, most of them shot in 8mm or 16mm, and ranging in length from nine seconds to four hours. With a few exceptions, they were made without sound, which he felt might spoil the intensity of the visual experience. He preferred to think of his films as metaphorical, abstract and highly subjective – a kind of poetry written with light.”

As he tells Colin Still, “Probably in my life my richest correspondence has been with poets..”

The Essential Brakhage is indeed an essential book.

As is the two-volume anthology Criterion DVD 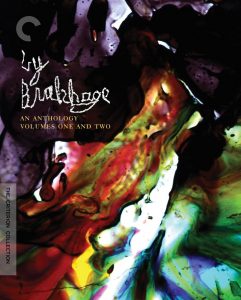 Today, January 14, is the anniversary of Stan Brakhage’s birth.