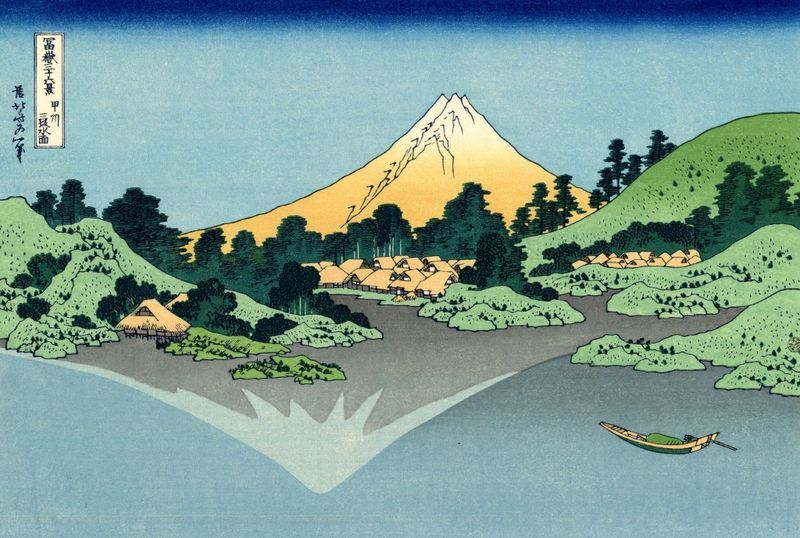 Hokusai -The Fuji reflects in Lake Kawaguchi, seen from the Misaka pass in the Kai province

Student: Can I go back and ask you a question? We were talking about entering the imagination and making it manifest..

AG: Yeah, well, the reason I read this (Christopher Smart’s “A Song to David”), incidentally, was, obviously , he had to sit down and work on it. And it must have been fun.

Student: For you, what’s left after this manifest  I mean, that’s not totally off-the-wall..

AG: Inside? – Inside?  It’s only.. You plumb the depth of a certain level of emotion (like this adoration..  and make.. and hallowing adoration, making a dithryamb and praise), and you discharge all that, and move people and move yourself, move yourself and move people, and live in a common world with other people for a while. Because you’ve leveled it. like a big.. like Mount St. Helens, You’ve leveled everything for a while..

Student: I used to get the impression that this was, like, bomb-express type, I mean, you know, for a while – that I was hearing from you, that it was just.. to let this all come out .It was… It was like a bomb…..

AG: No. no, no, it was… Once you’ve got.. once you’ve got a clear idea and a rhythm, you’re doing fine. It’s just that there’s many…  There’s a lot of writing which has no rhythm, which is just complaint and anger and resentment and cursing. I mean, most of the Beatnik (not most of, I would say, no), but, yeah, the “Beatnik”, or “Beat-type”, or open-form writing, that intended to make a great assault on society, was not a dithyrambic magnificat, it was mostly, like, a downer, a bummer, where people were not plumbing their own hearts but were just using external superficial images and denouncing society – like society-this, society-that.

There’s a kid I saw in 1967 in Haight Ashbery, who was sixteen years old. So this kid was always talking about society,  complaining about society, saying “society-this” and “society-that”- and.. I can’t get any groceries, “society-society”  And he knew better, you know, than to project it out on…. Because you can’t..  you can criticize society, obviously, but you have to do it from, you know,  some clear.. have something to say

AG:  Yeah,  when you do that society-this-that complaining.  (Chogyam) Trungpa pointed that out fairly clearly – the notion of an idea of a resentment not being a sufficent basis for poetry, just resentment – (tears, maybe, wounded feelings, maybe – but anger and resentment, you know, is generally displacement of some family quarrel – like laying out on someone. who doesn’t deserve it. I mean, otherwise…)

See, the problem is..   Katagiri Roshi told.. has some anecdote about his teacher, who was enlightened when, after sitting many many many years, he devised a way of sitting where he was really out of the way of everybody, he’d get in a boat and float on, a sort of a, calm vast lake, in the middle of China, or something. And he did that for five years and he meditated ten hours a day, but he still couldn’t conquer himself, really. And one day he was sitting there meditating and, all of a sudden, goddamit, some guy came up on him in a boat, in another boat. The guy was so fuckin’ stupid he didn’t even see he was there meditating! – And he really got up, and he opened his eyes, and got angry – and saw there was nobody in the boat! (it was an empty boat!).  So he realized there was nobody to get angry at, unless he was going to get angy at the universe, unless he was going to resent, and get angry at, the entire universe, there was nobody there to get angry at. And that was his satori – the realization that in any conflict, there’s nobody there – in every conflict. There’s nobody there in you and there’s nobody there in the other boat, either. Nobody there in you, in the sense that he, he was there angry, at somebody that he imagined in the other boat, so who was he that was angry?…   so who are you, but a huge hallucinatory illusion, resenting something you projected?   Of course, if you did get that empty-minded then you might find something to change, criticize, critique (as Gregory Corso would say “to critique”, not “criticize”, but to “critique”, that is to say, check out, analyze, and pull things around with intelligence, but it wouldn’t necessarily involve weeping anger).