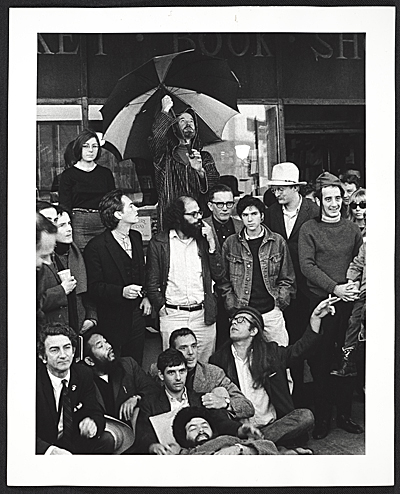 New York, Paris, Manchester, England –  Looking forward this summer to three big Beat extravaganzas. Taking them in order – June 3rd to 8th at the Howl Happening Space in New York City (and in related spaces) – “The Beats and Beyond – A Gathering”, a five-day celebration, coinciding with what would have been Allen’s 90th birthday, organized by the irrepressible Bob Holman, featuring a veritable who’s-who – Michael McClure, Diane di Prima, Joanne Kyger, John Giorno, Ed Sanders, Margaret Randall, Hettie Jones, David Henderson, Steve Cannon – “and more” (“and beyond”). More details to be announced soon. Watch this space

We’ve already announced it, but it’s worth announcing again, from the 22nd of June to the 3rd of October in Paris at the Pompidou Center (Centre Pompidou) – “Beat Generation”, a multi-media presentation, mapping “both the shifting geographical focus of the movement and its ever-shifting contours”. Among the highlights, photos by Allen, William Burroughs, Robert Frank, Fred W McDarrah, John Cohen, and, of course, Harold Chapman‘s iconic shots of the Beat Hotel; a focus on the African-American Beat poets (Leroi Jones (Amiri Baraka), Bob Kaufman); a substantial focus on the West Coast muse (art work by Wallace Berman, Bruce Conner, George Herms, Jay Defeo, Jess..), and plenty, plenty more

“Focused on a precise historical period and deliberately making use of “low tech” media and means of reproduction (vinyl discs on turntables, carousel slide-projectors, 16 mm film projectors)”, the curators write,  “this exhibition illustrates how profoundly the Beat Generation – in its expressive freedom, its breaking down of boundaries between disciplines and cultures, its “poor” ecstatic and contemplative aesthetic, and also its violence – influenced the development of today’s countercultures, revealing it as their origin and casting light on on-going problematics.”

“The (Beat) theme will be reflected in all the Center’s activities, with a rich program of events devised in collaboration with the Bibliotheque Public d’Information and Ircam – readings, concerts, discussions, film-screenings, a colloquium, a young people’s programme at Studio 13/16, etc”

The exhibition is accompanied by a catalog with essays by the curators, Philippe-Alain Michaud and Jean-Jacques Lebel, and by Barry Miles, and others (and interviews, “the majority hitherto unpublished”, with Lawrence Ferlinghetti, Shigeyoshi Murao, Michael McClure, Joanne Kyger, Brion Gysin, Allen, and William Burroughs)

If you’re in Paris this summer, the Pompidou isn’t the only place where you’ll see work by Allen. Check out (don’t miss) the Velvet Underground show (already opened and up until August 21))

The third – and final – “Beat extravaganza” is Manchester, England – the 5th Annual Conference of the European Beat Studies Network, taking place between the 27th and the 29th of June – “Talks, Films, Musical Performances” – The two key foci there, (but, as usual, there’ll be a laudable range), will be “Music” and “Science”. 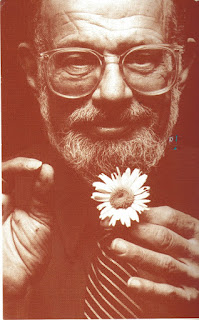 Did you know that Donovan helped Allen write those classic signs in the Bob Dylan Subterranean Homesick Blues video? – We didn’t.
(Dylan and Bob Neuwirth, apparently, pitched in a goodly amount too)

Did you know that hippie, etymologically, comes from opium-smoking? – We didn’t know that either.
For the latter we’re indebted to a conversation between Allen and the founder of the modern Hare Krishna movement,A.C.Bhaktivedenta Swami Prabhupada, and an old copy of their magazine, Back To Godhead – see here
Swami Prabhupada: : Allen, what is this “hippie”?
AG: The word “hip” started in China, smoked opium lying on their hips [he demonstrates (the position)]. Opium and its derivatives then spread to the West, and were looked down upon by the people in power, who were afraid of the effects. As a result, people created their own culture…language signs, symbols… 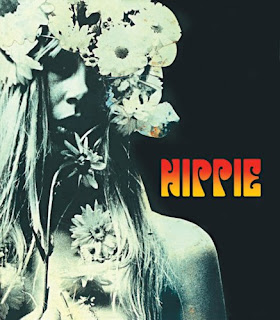