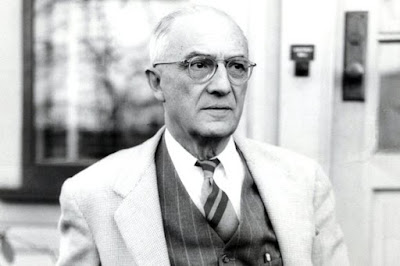 Q: (Describe for me some of your important influences?)

AG: I don’t know, I didn’t go to his funeral. What is the symbolism of all that? I don’t understand that.

AG: It sounds to me like some kind of ..really negative gimmick, sort of, like a waste of energy, sort of, except it like there are beautiful things that can be examined in the texts of The Beatles and this sounds like a mockery of the examination of texts, you know, the teeny-boppers really should be reading between the lines, but it sounds like some cynical disc jockey has decided to sour everybody on it by, you know, like, creating a flying saucer within the lyrics and then..

Q: It’s a nice game though, people are really enjoying it

Q: Looking for clues, man, because clues can be found in everything… 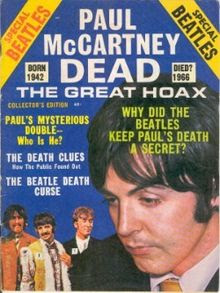 Q: I’d like to know specifically in what way Walt Whitman  influenced  you. I mean, I sense a deep brotherhood in ”A Supermarket in California”…..

AG: Well, I started reading Whitman heavily after I wrote “Howl”, actually, and then I read through all of Whitman and that sort of re-enforced feelings I had. Specifically, well, first of all, the almost Hebraic long line thing, the breath, the breath of someone talking, instead of someone inching  out a poem, like someone actually babbling forth whatever was on the heart. so the line that came from the heart and went out is in Whitman. The second… 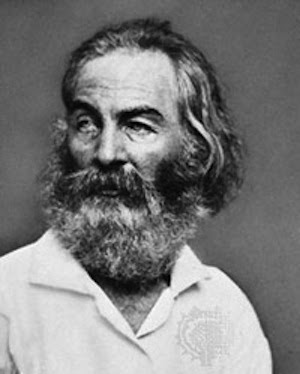 Q: (I was thinking,  Is there a relationship between the long line and the breath expansion)?

AG: Yeah. There’s I think a relationship, yeah.  Do you know the… Well.. If you hear Vedic chanting, it’s like it’s.. or Hebraic chanting, it’s.. it’s a form of yoga, actually and brings poetry back to yoga, that long line, (whereas) you take a deep breath to pronounce a long line – but, it’s not just a line, it’s like his actual feelings because Whitman, sexually, was a very interesting, open, polymorphous perverse mammal, who was acknowledging tendernesses in areas that were forbidden at the time and are sill to a great extent [1968] forbidden to men. The basic thing, say, starting off as a homosexual, or someone with homoerotic inclinations, and probably being afraid of them, (I don’t think he made out very much actually. We don’t know – tho’ I did meet someone who slept with.. wait wait…the grandson of President Chester A Arthur, Gavin Arthur living in San Francisco, slept with an English cleric named Edward Carpenter, who was the tutor to Queen Victoria’s children, I believe, or tutor to Prince Albert or something like that, who had gone to the United States and visited Whitman and made it with Whitman. So Gavin Arthur then made it with Neal Cassady, the hero of On The Road, so the transmission was complete)..Beginning with that, let us say that, at the vulgarist level, but Whitman was also acknowledging, or willing to acknowledge, on top of that, was that tenderness between men, open acknowledged frank tenderness between men, was the absolute necessary basis for a democratic society, because unless..   The rule was if the relation between (the) men citizens was “competitive rivalry”, (as it was pronounced to be by Hedley Donovan, the head of Time-Life Inc. – Quote “The American tradition is competition and rivalry”– Unquote) – If that’s so, well then you’ve got the kind of America that you’ve got now. If Whitman’s vision of interpersonal relationships between men comes true, which he says is the actual latent desire among men for a “comradely tenderness”, then a different kind of democracy energes, and a different kind of polis emerges, (a) different kind of man energes, a long-haired tender man, who’s not afraid of his homosexual component, whose not afraid of tenderness (doesn’t have to act it out but he’s not afraid of the blush of affection, doesn’t have to be afraid of his own unconscious), where the American, the Time magazine American of competition and rivalry has constantly to be fighting, fighting his own unconscious. So, finally, the Time magazine American is, finally, you know, (having a predatory relation with his chicks (sic) too – because they’re just more conquests rather than tender persons used.. 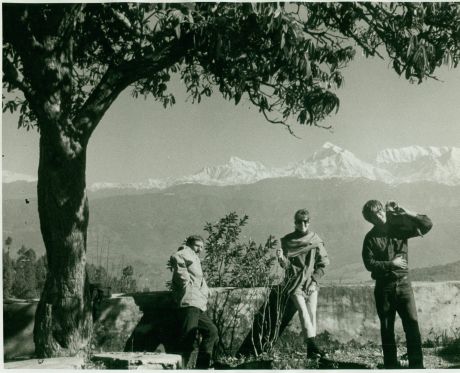 “Kausani, India February 1962; with Peter Orlovsky, Gary Snyder & his wife poet Joanne Kyger we made pilgrimage to Buddhist sacred sites, here visiting Lama Anigarika Govinda who lived on nearby ridge. Snyder & Joanne were visiting from Kyoto, Peter & I had come from Tangier”. Photograph & caption by Allen Ginsberg © The Estate of Allen Ginsberg

Q: I also wanted to know how enlightening your trip to India was (when you went with (Gary) Snyder and Joanne Kyger)?

AG: Well, (it) got me singing, started me singing, (19)61, (19)62. I learned a lot there. I learnt the Hare Krishna mantra there in India, and.. In fact, I started singing the Hare Krishna mantra in (19)63 in Vancouver. I think the first hip kirtan took place in )19)63 as part of the University of British Columbia, Vancouver Poetry Conference. After the first night we all got together (and George Bowering was there) and all began chanting Hare Krishna