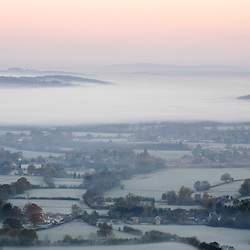 “Thou mightest best measure the mist on Malvern hills.Than get a mum of their mouth till money be shown” –  “Early morning mist at the foot of the Malvern hills in Worcestershire, UK” – Photo:  Andrew Fox

AG: So, now, what can you do with that?  (Piers Plowman – in the original) – So someone did something with that . Lots of people did something with it. It’s been done for centuries but..there is an English translation (not bad). Here’s another version of it, done in nineteen… into English.. in nineteen twelve, nineteen sixteen-seventeen. The old Riverside College classics series. (these were the standard textbooks around World War I)

“In a summer season when soft was the sun/I clad me in rough clothing, a shepherd as I were/In habit of a hermit unholy of works/Went I wide in this world wonders to hear/But on a May morning on Malvern Hills/To me befell a marvel, a fairy thing methought/I was weary of wandering and went me to rest/Under a broad bank by a burn side;/And as I lay and leaned and looked on the waters,/I slumbered in a sleep, it sounded so pleasant/Then did I dream a marvelous dream,/That I was in a wilderness, wist I not where;/And as I beheld into the east, on high to the sun/I saw a tower on a hill-top, splendidly-fashioned/a deep dell beneath, a dungeom therein,/With a deep ditch and dark and dreadful to see./A fair field full of folk found I there between/Of all manner of men, the mean and the rich,/ Working and wandering, as the world requireth/ Some put them to the plough, and played full seldom/In plowing and sowing produced they full hardly/What many of these wasters in gluttony destroy…” – (So, it’s actually.. and then it goes on to a great visionary dream of..seven deadly sins, and the pride, gluttony…

So, it’s actually a terrificly strong form of sound. I mean, kids do it. Peter Piper picked a peck of pickled peppers” did it, to some extent. It doesn’t have that caesura. The alliteration is classic in our childhood ear. The measure.. have you heard before that kind of measure? – “all the May morning on Malvern Hill” – has anybody heard that as sort of part of their original archetypal, Beethoven-ian, bath-tub sounds? … Well that kind of alliteration to (a) beat, with caesura…