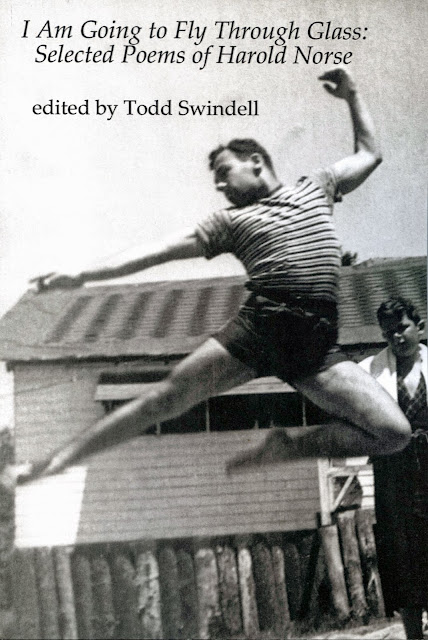 AG: Okay –  Are we about ready for Chapter two of the evening ? – Shall we go on now? –  Harold Norse is a classic Bohemian figure on the (North) American and European poetry scene, We first met, myself and Harold, in.. on the New York subway, around 34thStreet, in 1944, around Christmas-time, when I came down from Columbia University to visit Greenwich Village all by myself for the first time with a copy of Rimbaud and a red handkerchief tied around my neck. I think I had just met William Burroughs, maybe a few nights before, and this was my first foray into the Village, and there was a young guy sitting across the subway from me and it turned out to be Harold Norse, who, seeing my copy of Rimbaud and my red neckerchief and me reciting poetry in a lonesome subway car with him as the only auditor, introduced himself. And then we walked in Greenwich Village and he showed me where Hart Crane had lived, and told me all sorts of gossip about (W.H.) Auden.

In 1939 when Auden first came to America, he was met at the boat by Harold Norse and Chester Kallman (who became Auden’s lover, and with Auden was Christopher Isherwood, who struck up acquaintance with Harold, who then lived a sort of bohemian life and knew the Brooklyn Heights apartment where Gypsy Rose Lee, (where) Auden lived with a large literary company, the bohemia of pre-War Europe recorded in Auden’s poem< “I sit in one of the dives/On Fifty-second Street/ Uncertain and afraid…”, “September 1st, 1939”…Harold had sent him to that gay bar and that was the dive of that celebrated poem. Harold continued writing, was living in Greenwich Village all during the early (19)40’s and mid (19)40s, visited Europe and lived a long time (in) Italy (and) France, traveling around, Greece later on. He translated the Roman Sonnets of  G.G.Belli  (a brilliant book, published by Jonathan Williams and Jargon Press, which received a great deal of favorable comment by William Carlos Williams, who said of his translations of the vernacular Roman dialect of Belli into vernacular Americanese – “You have breached a new lead, shown a new power of language which makes theories of composition so much blah” No one can do this kind of translation without genius for native language which you have shown, our American speech”.

So that was Williams’ early praise for Harold Norse’s demotic English (he was a student of Williams and one of the followers of that great school – also knew the American Surrealists when they were in New York, was friends with Charles Henri Ford) Over the years, published, here in Denver, his first book, 1953, Allan Swallow – The Undersea Mountain.  Then, 1960, was the translations from Belli, Jargon Press. Macmillan, big-time, New York,1962, a book called The Dancing Beasts – Poems, Karma Circuit, done by Nothing Doing Press, London, 1967, Hotel Nirvana (which was selected poems, put out, belatedly, by City Lights, 1974). And then a huge collection of all of his work, put out by Gay Sunshine Press, Carnivorous Saint – Poems 1941-1976.  He edited the magazine from San Francisco  Bastard Angel – and by (the) Gay, Advocate, one of the..  in a critical review, was termed a “Catullan American”, one of the few Americans who had some of the spark of Catullus’ hardness in dealing with erotic themes. Harold Norse. 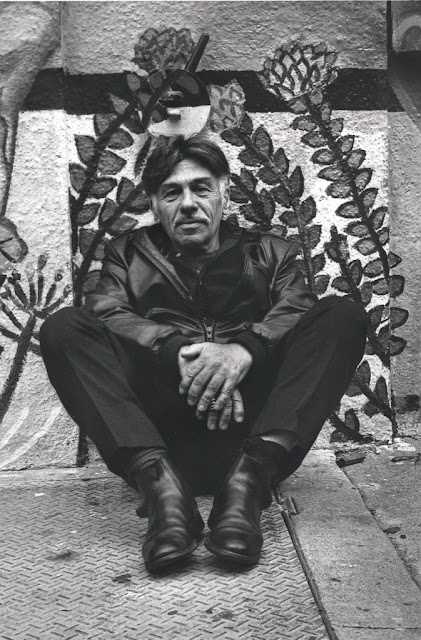 HN: Just like to make a few little corrections in this summation. I didn’t go to meet Auden at the boat, I..my friend Chester Kallman who was at Brooklyn College with me came over and said that Auden and Isherwood are coming and they’re going to read in New York. Let’s go and sit in the front row and wink at them! – and that’s how we met.

Where was this? – The hall? – the name of it I can’t remember but in the current biography of Auden that’s described, the biography of W.H.Auden by a man called Osborne [Charles Osborne], which I haven’t read fully, but I looked my name up in the index and found out that I had been quoted without my knowledge or permission about that, and I was also described as a blonde (Chester was a blonde and I wasn’t, but..)

When I saw Allen in the subway, Allen was seventeen at that time and there was nobody else in the subway andit was about four o’clock in the morning , I heard him reciting and as the train stopped and the roar ceased,I recognized that it was French and that it was Rimbaud, but I don’t remember seeing a copy of Rimbaud in your hand (Allen), and I said to him when the train stopped again- “Rimbaud!” – and he said, “You’re a poet”, and that’s how we ended up in Green-wich Village in my apartment….

The latest book is called Carnivorous Saint, which is not a collection of all my work but it is acollection of all the poems that center around the gay theme, and I thought I had something like twenty-four or five of them, I kept finding more and more, and, going back to 1941 to 1976, and it turned out to be several hundred

I believe however that I’ll start this reading from some poems from Hotel Nirvana The first one is called “For the Jewish Saint Teresa of Avila” – A scholar and a friend of mine called Gerald Brenan, who was about ninety years old and is an Anglo-Irish scholar of Spanish history (and lives in Spain) ,discovered that Saint Teresa of Avila, the patron saint of Spain, was a full-blooded Jewess, that her parents or her grandparents had converted, having been persuaded by the Inquisition to do (so).“Saint Teresa, I love your witty sanctity..”…”… report the second coming on Flight 666” –

I believe it was the same scholar Gerald Brenan who discovered the real reason why Garcia Lorca was killed by the Fascists. Most of us assume or believe that he was shot because he was a Communist but Brenan unearthed the facts that have been published in a book,Death in Grenada, in 1973 [were they?] – [Editorial note – Brenan was undoubtedly a pioneer in the investigation of the death of Lorca and deserves much credit but mention should also be made then of Ian Gibson and his exhaustive research] – The fact of the matter was that he (Garcia Lorca) was in love with the son of the police chief of Grenada and was making it with him. Now that’s why he was shot, And I tell the story in the first person of one of the Fascists who shot him and the names involved in it are those who participated. The facts are all true in the poem – “We bumped off your friend, the poet with the big fat head this morning…””…was a disastrous event…” [poem ends in media res] –

“This poem is called “These Fears Are Real Not Paranoid” (I’m walking in silent spring, I do not feel like a million…”..”O Zen masters, quick! do something!’ –

next – a two-part poem, “You must have been a sensational baby“ (I love your eyebrows, said one, the distribution of your body hair is sensational..” …”The whole place trembled with lust”)
and this is a poem called “In November” which was written, I believe in November of (19)72….when I’d just come to San Francisco, I’d been out of the country fifteen years and I hadn’t had a book published in America for ten years, and.. this is what happened – Norse reads “In November” -(“In November, I lost my food stamps, the computer said I did not exist..”….”……fifty-nine cents, a hundred-and-forty-five pounds and two good balls”)

This is a poem called “Remembering Paul Goodman”, in five sections, and the last section actually has a stanza in it about meeting Allen in the subway, this is a poem about the (19)40’s experience with Paul Goodman (“As I cross a windy street corner waiting for a bus…” ….[“Ginsberg high in the subway red kerchief around his neck recited Rimbaud in eerie dawn of 1944 drowned by the IRT. the flood of words across the isle from me and then departed for mad mind music after we greeted the future”]……..”I do not eulogize dead men, he said, I find that fitting.”

I’d like to read a poem that is not necessarily autobiographical. Every time I read this poem, people ask me if the details are true and I have to tell them now, in advance rather than afterwards, that the vital statistics in tis poem are not autobiographical, it is a composite.Norse reads “I’m Not A Man” ( I’m not a man, I can’t earn a living, buy new things for my family..”..”I’m not a man, I don’t want to destroy you”)

Do you want to hear something dirty? [Yeah] – Peter (Orlovsky) wants to hear something dirty. I’ve got a lot of it but I can’t find it . I must have cut out the dirty ones today.. hmm, well, Peter, I’ll have to read one that isn’t (dirty) – oh – I thought the whole book was dirty, now I don’t seem to be able to find anything. It’s weird. It’s extraordinary… jesus! – well, I don’t want to disappoint Peter or the audience, but..oh…hmm.. this is weird, maybe it isn’t a dirty book after all, I always thought it was.

I can read you a couple of dirty translations from..Catullus..
I’ll probably find all the dirty ones when I go back tonight, but..ah, yes
[Norse reads from his translations of Catullus] – (“I am entrusting to you, Aurelius, all I love most in the world, this boy..”…”..his poems are under no such strict necessity”)…[and one more] – The one..my favorite among those..this is a… this one.. – (“O slickest thieves at the public baths…”…”…your ass-boy is too hairy to sell”).
(keeps looking for “something dirty”)I don’t seem to be able to find these dirty poems of mine – huh?.. I know, it’s impossible to find anything I look for –  no, it’s not dirty enough…

This is a cut-up of a picture poem [displays text], some of it has very small print, which I hope I can see, but it has illustrations of bar-bell, boys who are using bar-bells and doing body-building, and… which is part of the poem. You don’t have to see the whole thing, but I hope I can see these words.   I’m afraid I really can’t, in this light – oh..oh jesus! – sorry, I can’t see it, it’s done in different-sized print, that’s too bad. I see if I can put some light on this subject.well, actually, Iwould like (then) to close with a poem written about twenty-five years ago, which was called, it is..a ballad and it’s called “The Ballad of Beautiful Boys” (“Whatever became of Hans, the German, tall and pale and hard as an oar/And where is Bruce, the college freshman, who made a javelin look small/And the Irish boy in the merchant marine…..”… “Where are the beautiful boys I knew once whose greatest dread was the touch of cunts?’) 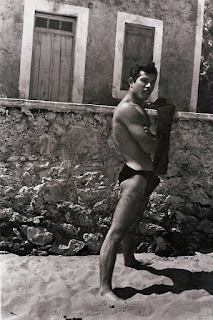 [Audio for the above can be found here, beginning at approximately thirty-five minutes in and concluding at the end of the tape]