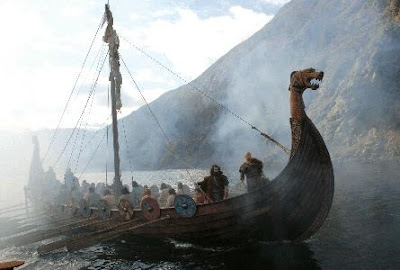 Allen continues with his observations on  alliterative meter, and (Ezra Pound’s translation of) the classic Anglo-Saxon poem, “The Seafarer”)

So, on top of the fact that it’s got two beats on each side, the first side of it, they’ve got to have  the same consonant (“nor eat the…”) In this case, it would be “Bosque taketh blossom”>(“b” is blossom) – The accented syllable also has an initial rhyme (“Bosque taketh blossom”) – or the same consonant – “Peter Piper.. picked a peck.. of pickled peppers… prayed he, perfectly?)- Okay? So, the first half of the line… (does this need illustration on the blackboard, or is it clear?

Student: (“The Seafarer” is in the anthology)

Student: “The Seafarer” is in the anthology

AG: Yeah, I forgot. It is. That’s right..Excuse me, I spaced out on that. It is in the anthology (Norton anthology) on page nine nine four…yeah, nine nine four. I’m sorry, I was reading it out of… It originally appears in his book, Persona [sic]  [Personae – Editorial Note – original edition, 1909 – It was, actually, first published in A.R. Orage’s magazine, New Age, on November 30, 1911 – tho’, in a subsequent note in his 1920 volume, Umbra, Pound did indeed define it as a “major personae”] – (different personages, different masks, different personae of the poet),  and it is over here. That’s good – Okay, well, you’ve got it… Turning to page…

Oh, did you find out anything about…?  [There begins here a brief discursion regarding the procedure of ordering copies of books from the (local) bookstores]
(AG: “Would it be simpler if we just made out a blank cheque and got them all brought down here or something?… Ok, I’ll give you a cheque tonight… Just go get them and bring them down, and then..where will they be? how will we distribute them?…how about leaving them in the the library at Naropa”….Okay, (so) we’ll get the books, they’ll be down there tomorrow.. yes, afternoon..

The line above – “He hath not harp for harping nor in ring-having” – so the “H’s are the one, and the second half of the line has a “having” – “But shall have his sorrow for sea-fare” – Pound is translating and he does not have complete lines..so..because he’s translatng and condensing and doing it into condensed English, rather than long-winded English, so he’ll kill half of a line just to make it accurate clear to some rhythmic sound, rather than extending it on just to have the rhyme, to have the alliterative rhyme.

But it might be interesting, I think, why don’t we try a unison recitation from line eighty on – from “Delight mid the doughty./Days little durable..” – see what it sounds like? Actually, we did that.. it’s the first time we did it, the other day in the class, and I thought that was a fantastic idea for getting into the sound of poetry as..as just mass…mass unison repetition, or recital, of it, because, you see, when I was a kid, my father taught poetry in high school and in those days they taught really great things (they taught “Macbeth”, they taught Poe’s “Bells”, they taught ”The Raven”, (they taught a lot of crap – some interesting crap like,  “Tell me not in mournful numbers/Life is but an empty dream!/ For the soul is dead that slumbers/ And things are not what they seem” (Longfellow), but they taught “The Bells” by Poe, they taught Vachel Lindsay’s  “Congo” and Shelley‘s  “Ode To The West Wind”  and “Epipsychidion” and  Wordsworth – and I just heard it all so… in my bones..in my ear ..and it.. got (for me) a permanent sense of the strong accent, stronge rhythm and long vowel. And I think that’s the key. It may be too late to teach that now. It may be that you have to get it when you’re in childhood for it to become permenantly part of your nervous system so that you do it by yourself whenever you want. But I think, actually, just like any kind of music, once you learn it, learn the tune, it sticks with you. So it may be of use when we come to real heavy things, really interesting things, to do it unison, see what it sounds like

So.. [class begins unison recitation] – “Delight mid the doughty./Days little durable,/And all arrogance of earthern riches,/There come now no kings or Ceasars/Nor gold-giving lords like those gone./Howe’er in mirth most magnified,/Who’ere lived in life most lordliest/Drear all this excellence, delights, undurable!/ Waneth the watch but the world holdeth./Tomb hideth trouble. The blade is laid low./Earthly glory ageth and seareth./ No man at all going the earth’s gait,/But age fares against him, his face paleth,/Grey-haired he groaneth, knows gone companions,/Lordly men are to earth o’ergiven,/Nor may he then the flesh-cover, whose life ceaseth,/Nor eat the sweet nor feel the  sorry/Nor stir hand nor think in mid heart,/And though he strew the grave with gold,/His born brothers, their buried bodies/Be an unlikely treasure hoard.”

However, that’s the older English, and I don’t know how to pronounce proper Old English… I hear it’s very guttural….