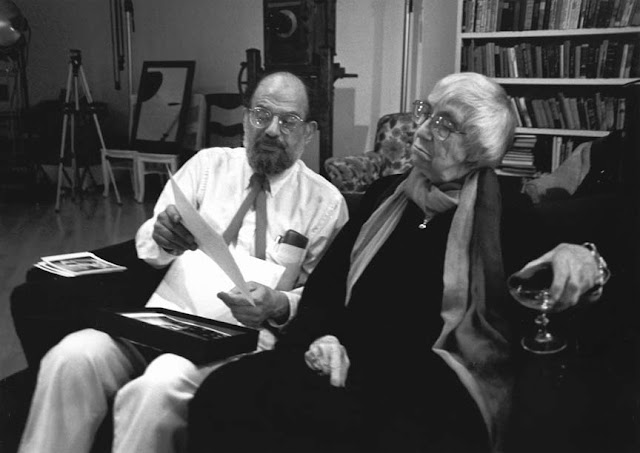 From an interview, in 1991, with Thomas Gladysz

TG: In your book, Berenice Abbott is credited for her “off-hand direction”

AG: “Occasionally, I used to visit her up in Maine where she lives. A mutual friend, Hank O’Neal who edited her last book –  took me to her, and I learned something. I told Robert Frank and he said with a wry smile, “maybe I could show you something too” . She was quite old but quite sharp and alert. She knew people I admired, like Hart Crane, the poet and Marsden Hartley, the painter-poet. And she knew William Carlos Williams in the (19)20’s. From her I heard a lot of gossip about people I had read about. It was a pleasure to connect with that lineage and have that sense of old bohemia. It was good to see  someone who had survived as an individual with her particularity of gender. Berenice herself liked ladies and, since I am gay, it was nice to reinforce the fact that uyou could live a full life.”

“Also what was quite interesting was her devotion to her elders – her lineage. She had rescued the glass plates of (Eugene) Atget and kept them for many years – all those delicate glass plates she brought from Paris. And of her admiration for younger generations she said, “I love that Robert Frank. I’ve never met him, but of all of the younger photographers, he’s just marvelous”. She had enthusiasm for a younger person and respect for an older person. That seems like the real missing link in American society..”

“I was in New York at an art gallery where Berenice Abbott was showing some of her older photos. I approached her, pointed my camera at her, and she said, “Oh, don’t be a shutterbug!” Then she said, “Forgive me. If you’re going to take my picture, back a way a little. You don’t want to get too close otherwise my forehead will bulge or the cheek will bulge and it will be all out of proportion. Give a little space around the subject, so you can see where it is and what the context is”

In an article on Robert Frank, he cites further advice: “All these young photographers with little cameras click click click think they can get something….You need to take time and prepare a photograph, and use big frame to get that tiny detail in panoramic scope.”

“Dear Miss Abbott,
Our visit last August (with Hank O”Neal and Shelley Skier and young scholar Jonathan Robbins) catalyzed some memory of 1930s and my mother, and I had a dream, a  sort of epilogue twenty-five years later to a long poem I once wrote – “Kaddish”. In dream I met my long-dead mother as an old shopping-bag lady in an alleyway in the Bronx, and your figure and your photographs were part of the background scene. There’s a  composite description (with many details clear but dream-wrong) of some of your photos which had stuck in my mind and which I return to look at often in book-edit of your pictures. Particularly the frontispiece, “hundred thousand windows shining electric lit” [ “New York at Night, 1932”] , the “Fifth Avenue Coach” (which in dreams I confused with “Tramcar in September Sun”), 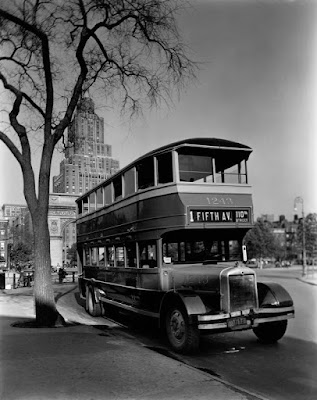 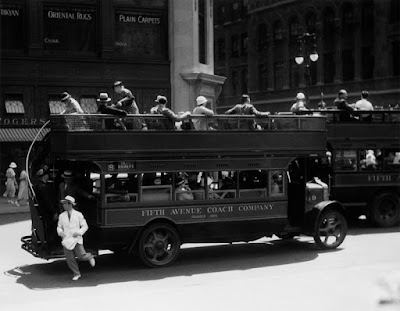 the “General View from Manhattan Bridge” and “Herald Square” with straw hats I recomposed in the dream, described in the new poem, “White Shroud” 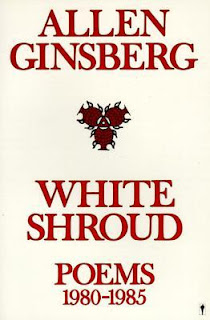 I tried to stick to the Breughel-like principle you stated – universal panorama and maximum fine detail (by means of large negative) in the poem. I hope you have time to read it or find someone to read it to you….
I would like to buy from you prints of several of the photographs I mentioned above. Do you have any for sale, or could they be printed and what would it cost ? Particularly the “thousands of windows electric lit at midnite midtown” and “Herald Square” because some versions of them entered my dream of my mother…
I learned a lot from the brief visit and want to thank you for your hospitality then. What I learned? Mainly old art-life attitude, and that one specific notion of large negative for maximum detail in a panoramic perspective. Thank you, I hope your energy and health stay spry till we can meet again
Respectfully yours
Allen Ginsberg 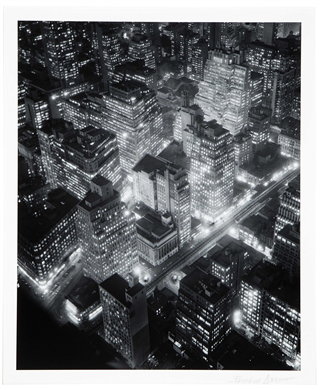 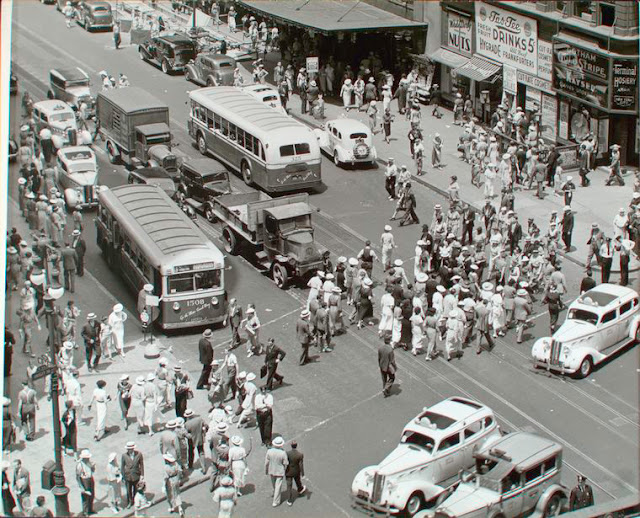