Poems from Tea at The Kalapa Court 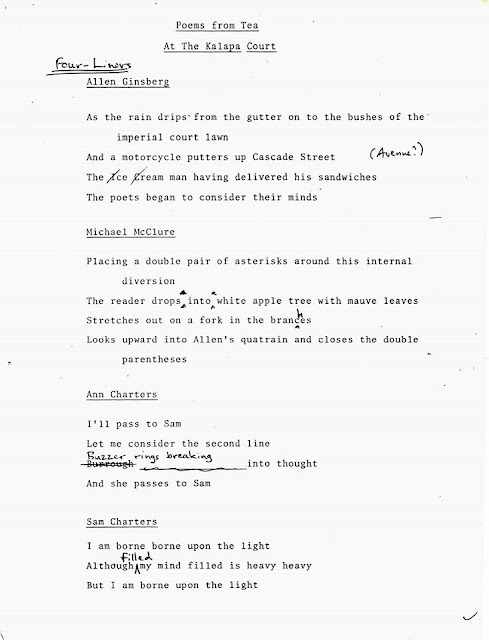 Randy Roark‘s been posting some pretty interesting Ginsberg miscellanea over on Our Allen.  This is one of the most interesting. – “Poems from Tea at the Kalapa Court“.

As Randy, in a note about it, explains:

“On July 26, 1982, Chogyam Trungpa, the founder of Naropa Institute and Vajracarya (Buddhist priest), invited the artists who were present for the On the Road Jack Kerouac festival—hosted by Naropa Institute—to tea at the Drawing Room at his Kalapa Court house in Boulder, for a spontaneous poetry party. (I’m not certain they knew this before they arrived.) Later the poems were typed up by Trungpa’s students and Allen got a copy, hand-corrected it, and gave it to me to publish in Friction 2/3 –  The Kerouac Conference issue. It not only includes what may be Robert Frank’s sole published poem, but also a poem directed to Ginsberg by Trungpa and Ginsberg’s reply, which I don’t believe have been published elsewhere.

Ginsberg is sometimes my teacher of poetry
He is sometimes a fool
Nonetheless, fool could be teacher
Jack Kerouac vision is gold sword for us
I appreciate Ginsberg beady eyes, sweet smile
Who taught me a lot and nonetheless I taught him too
Nonetheless, we have lots of full stops, commas, inverted commas, circumflexes, umlauts
However, I love Ginsberg’s gift to me
How to write poetry in American fashion
I salute, bow down to Ginsberg
The teacher who is unteachable
Therefore he is Vajrayana student
Let the sun shine to Ginsberg
Let the moon shine to Ginsberg
Along with the black stars be around Ginsberg
My profound devotion to Ginsberg who showed me American poetry
With or without punctuations

Having bowed down my forehead on the pavement on Central Park West
By the car wheels of the guru
Whose vehicle I had once stolen in the presence of my father
Having taken a vow to be his love-slave
For this and other lifetimes, if any
Having been humiliated in my Ginsberghood and praised for the same Ginsberghood
I accept the homage of my teacher-pupil and remain with my forehead on the pavement at his feet.”

“By the way”, “Randy adds,  “I resent Trungpa calling Allen a fool—even as a Buddhist student—and I found the scorn evident in his voice in the audio recording even more distasteful. There are a lot of words to describe Allen, but “fool” is not one of them. And I consider Allen’s response and insight (“Having been humiliated in my Ginsberghood and praised for the same Ginsberghood”) as proof.”
The aforementioned Robert Frank poem:
Iced tea at Doylestown
I’m thinking of Pablo
Because they’re drinking iced tea in a mental institution
Words
(the assignment was for a four-line poem)

Among the other participants, Peter Orlovsky, Michael McClure, Joanna McClure and Abbie Hoffman… 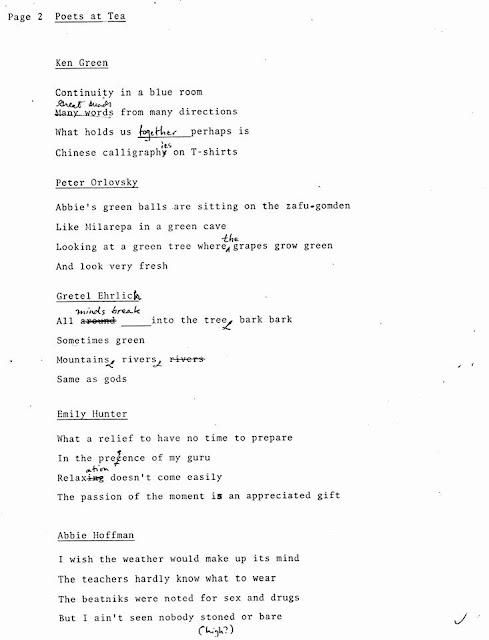 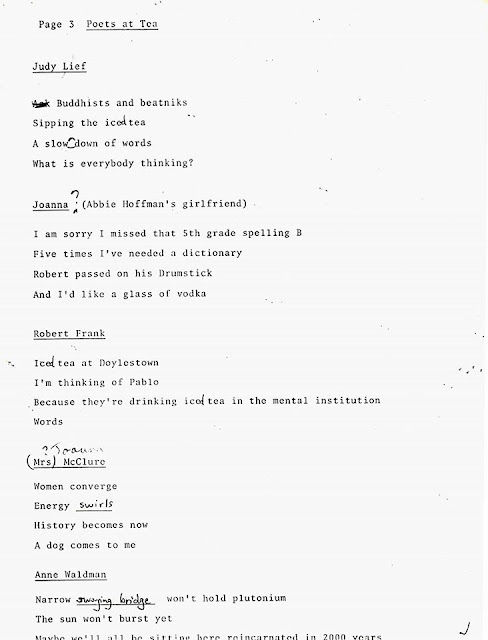 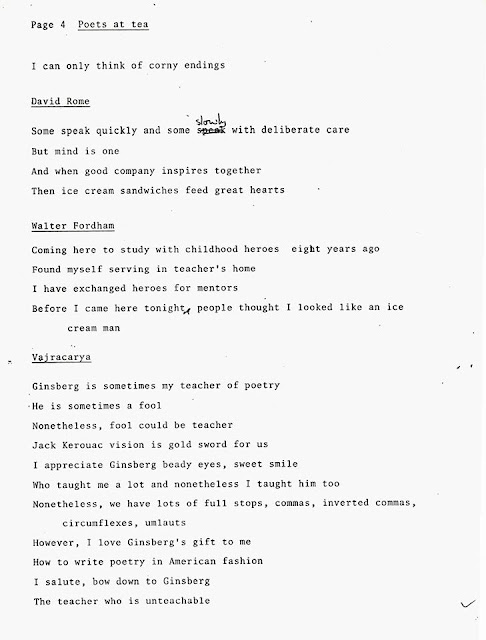 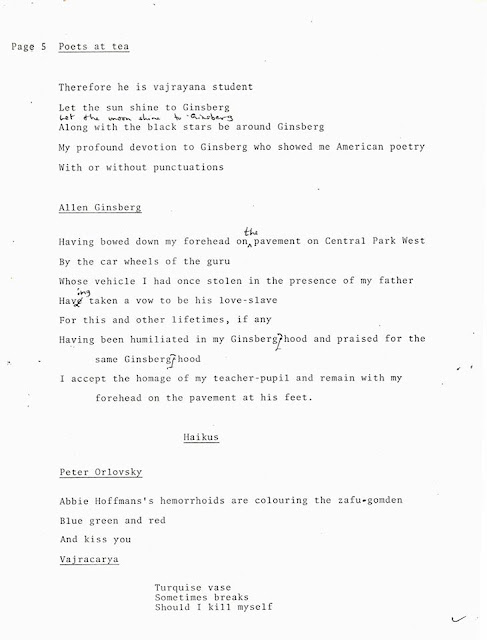 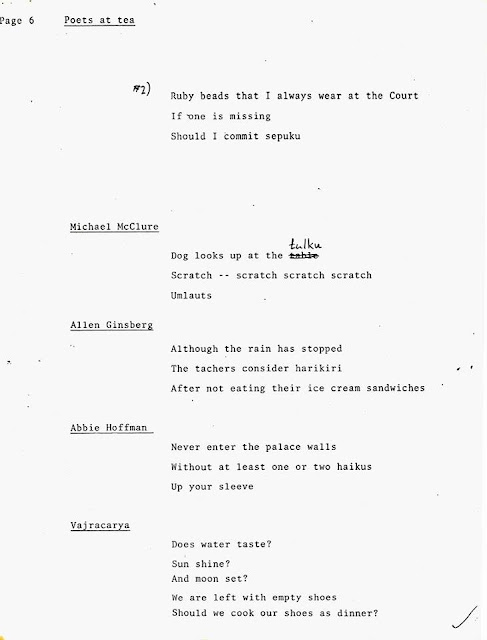 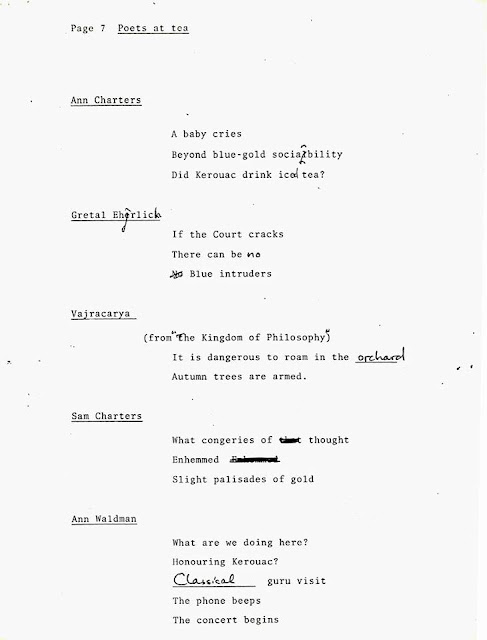 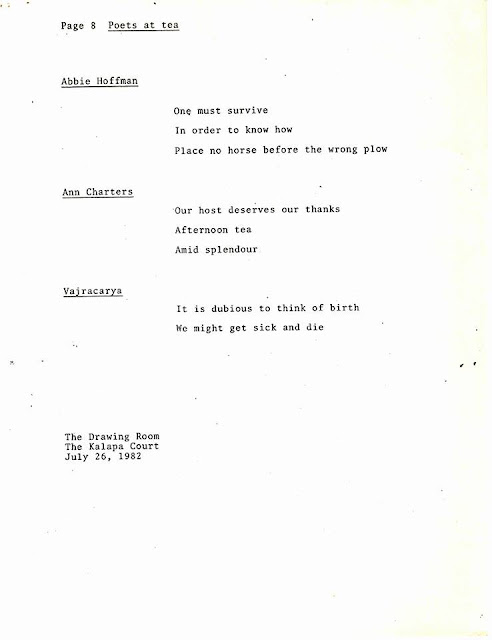