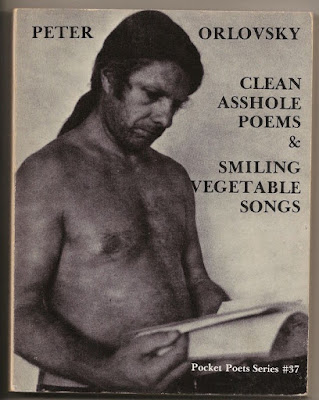 Peter Orlovsky (from a reading given at Naropa Institute, August 13, 1980), introduced by Allen Ginsberg

Listen to the audio here

Peter Orlovsky – A Triple-X reading.  (You have been warned)

AG: ..The next reader, who will conclude the evening, is the ever-popular Peter Orlovsky, sometime Instructor at Naropa Institute (he has conducted a workshop for the last few years), sometime Ambulance Attendant, Farmer & Nut-tree Planter, Silk-screen Handyman, House-Cleaner, Newsboy, Postal Clerk, discharged from the military after telling a government psychiatrist that – quote – “an army is an army against love” – unquote, witness of the 1950’s San Franciscan Poetry Renaissance, he was portrayed by Jack Kerouac as hospital-nurse-saint Simon Darlovsky, among Desolation Angels, learned driving speech from Neal Cassady and taught heart in return, partook of psychedelic revolution, a pillar of strength with Timothy Leary and Charles Olson in Newton Center outside of Harvard, companion (of) Kerouac, and also reader of (William) Burroughs in Tangiers in the early (19)60’s, was one of the first American poets to make a modern Passage to India in the early (19)60’s, accompanying Gary Snyder, Joanne Kyger, and myself, where he studied sarod, banjo and guitar, read poetry in Chicago, at Harvard, Columbia, Princeton,Yale, New York St Mark’s Poetry Project, survived the speed plague of the (19)60’s, and junk-hells as well, sang in jail at anti-war protest and political convention occasions, was published in historic Beatitude in San Francisco and Don Allen anthologies of New American poetry, played himself in early underground Robert Frank movies and, later, Vajrayana Naropa Fried Shoes Cooked Diamonds movies, traveled with (Bob) Dylan’s Rolling Thunder Revue as resident banjo-philosopher-meditator and also helper-with-the-baggage, farmed solitary upstate New York (ten years, organic and herculean), fed and nursed decades of poetry families, and now an experienced Buddhist sitter and advanced Vajrayana meditation practitioner  (his dharma-name is “Ocean of Generosity”), Peter Orlovsky 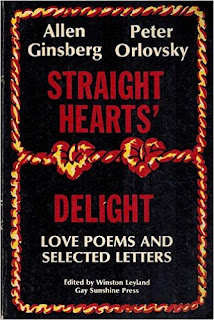 Beginning at approximately three-and-a-quarter minutes in, Peter does just that (reading  three sections, beginning with “Peter Jerking Allen Off (First Sex Experiment)”,”Second Sex Experiment” (“it was very lugubrious and Bruegel-like”), and “Allen Jerking Off On Bed”  (“Sex Experiment Number 3″)”

At approximately eighteen-and-a-half minutes in, Peter picks up the guitar and begins strumming – “Oh, I’ve got a new one about Vitamin C .. (that) I take a.. because I’ve been smoking (I’ve got a cold, I’ve gotta stop smoking)..and I take ten grams, ten grams of Vitamin C” – [begins singing] – “You are my vitamin C, ten grams (chew it in the early morning time, so it don’t sneeze away)”..” You are my prostrations in the early morning time, three hours a day, work it up to four, five, six, especially in the wintertime..”..”You are my tofu, twice the amount of protein…”…
“Just the other day, I jerked off four times in a row,  just yesterday, I jerked off four times in a row, much to my surprise, I just had to go..”
and, one more..
“Keep it clean in-between, when you’re sucking your little girl or your big filly..” “keep it clean with cold-water protein..” 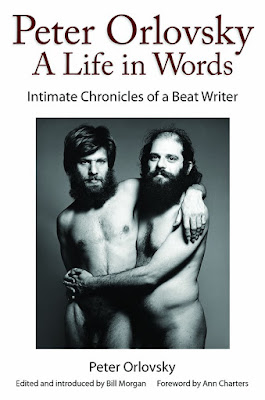 PO: What time is it?
AG: Ten to
PO: It’s ten of eleven. I’ve got to go. So many things to do. I just bought a new manure spreader..I just bought a new manure spreader, it cost two-hundred-and-fifty dollars, and I had to clean it and brush it clean and I had to paint it with oil so the wood, the boards, the floorboards don’t rot. Nearest dairy farmer said I could keep the manure if.. we just have to shovel it – isn’t that right, Allen?…
Thank you

AG: Thank you all for your attention and massive participation in the evening,
and to William Burroughs for his brilliant performance,
(to) Harold Norse for his historical honesty,
and Peter Orlovsky for his baritone nakedness…..

The first part of this reading (featuring William Burroughs and Harold Norse), the readings that preceded this, will be presented on the Allen Ginsberg Project in the coming weeks