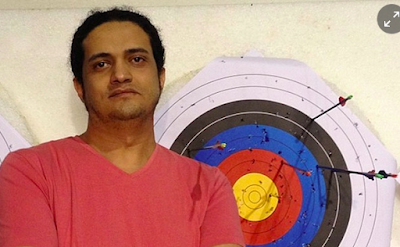 “We, the undersigned organizations, all dedicated to the value of creative freedom, are writing to express our grave concern that Ashraf Fayadh has been sentenced to death for apostasy.

Ashraf Fayadh, a poet, artist, curator, and member of the British-Saudi art organization Edge of Arabia was first detained in relation to his collection of poems Instructions Within following the submission of a complaint to the Saudi Committee for the Promotion of Virtue. He was released on bail but rearrested in January 2014.

According to court documents in May 2014 the General Court of Abha found proof that Fayadh had committed apostasy (ridda) but had repented for it. The charge of apostasy was dropped, but he was nevertheless sentenced to four years in prison and 800 lashes in relation to numerous charges related to blasphemy.
At Ashrad Fayadh’s retrial in November 2015 the judge reversed the previous ruling, declaring that repentance was not enough to avoid the death penalty.

We believe that all charges against him should have been dropped entirely, and are appalled that Fayadh has instead been sentenced to death for apostasy, simply for exercising his rights to freedom of expression and freedom of belief…..It is our understanding that Fayadh has 30 days to appeal this latest ruling and we urge the authorities to allow him access to the lawyer of his choice.
We call on the Saudi authorities to release Ashrad Fayadh and others detained in Saudi Arabia in violation of their right to freedom of expression immediately and unconditionally.”

“We,  poets and writers from around the world,  are appalled that the Saudi Arabian authorities have sentenced Palestinian poet, Ashraf Fayadh,  to death for apostasy.

It is not a crime to hold an idea, however unpopular, nor is it a crime to express opinion peacefully. Evdry individual has the freedom to believe or not believe. Freedom of conscience is an essential human right

The death sentence against Fayadh is the latest example of the Kingdom of Saudi Arabia’s lack of tolerance for freedom of expression and ongoing persecution of free thinkers.

We, Fayadh’s fellow poets and writers, urge the Saudi authorities to desist from punishing individuals for the peaceful exercise of their right to freedom of expression and call for his immediate and unconditional release.”

Here’s a report from Amnesty International   (available in English, French, Spanish, and Arabic)

This case is most urgent. Please do all you can do to spread the word and agitate for/insist upon Fayadh’s release. 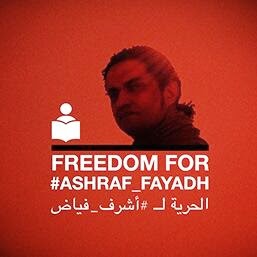 Here’s Fayadha, from 2013, on Saudi tv, discussing, Mostly Visible, a show of artists from Saudi Arabia that he curated in the Saudi city of Jidda  (He was also, that same year, with Edge of Arabia, involved in  curating an exhibition at the Venice Biennale)

This story is on-going.