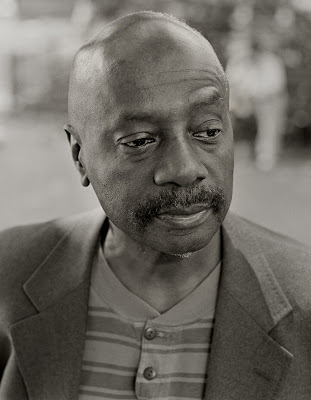 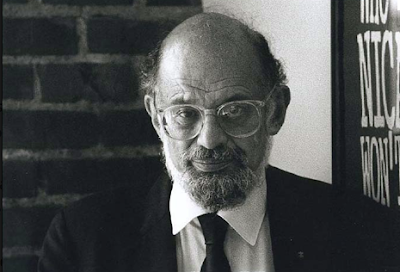 Last weekend it was a triple-X reading, this weekend it’s an interrupted reading. Well, we’ve had those, of course, several times before here on the Ginsberg Project (notably, with the participant, the agency of disruption, being a rambuncious Gregory Corso – see, for example here and here). It’s not Gregory this time, but an oblivious insistent audience-member, who finally has to be escorted from the room, not before causing some considerable mayhem and clearly affecting Allen (he amends his first poem – “Birdbrain is a poet talking to you/Birdbrain interrupted the poet talking to you”) – Allen loses his temper (“What a pleasure! It’s just a pleasure to get mad like that! It’s so rarely allowed”) – and with some justification, it would seem, (even though he tries to maintain his composure – “The Buddhist thing is co-emergent wisdom, that’s right, co-emergent wisdom..”).

The transcript today takes in David Henderson, his co-reader,’s first set (Henderson is only momentarily waylaid by the heckler), through to the moment of distraction

Tomorrow we’ll have the rest of Allen’s set and more poems by David.

The reading (from June 24, 1981) starts off  (on the audio, approximately thirty-seconds in) with an introduction by Peter Orlovsky

“Dave Henderson was born in Harlem, educated in City University in New York, the New School For Social Research and the East-West Institute of Cambridge. He was a founder of the East Village Other and editor of Umbra magazine. He has given numerous poetry readings and is widely anthologized. His work has been translated into French, Italian, Spanish and Chinese. His books include Felix of the Silent Forest (Poets Press), Da Mayor of Harlem (Dutton).. Introducing Da Mayor of Harlem  –  Introduction to Nothing (Best Company Press (uh?))  that’s the.. that’s the what?

PO: That’s the non-existent book he wrote….  [Editorial note – “Re Peter Orlovsky’s intro” – “there is no such publication as Introduction to Nothing – (or Introducing Da Mayor of Harlem, for that matter)] –  “All I did was say that it was non-existent. It was neither the moment (the time) nor the place to further deny an obvious misstatement” (DH, 2015, in recollection)]

PO: ..and a biography entitled Jimi Hendrix –Voodoo Child of the Aquarian Age  – David Henderson… [Editorial note – later re-titled “Scuse Me While I Kiss The Sky], The Low Eastnd, California, “Dedicated to Langston Hughes/ And to Calvin C Hernton, Eddie Krasnow & “Max”
And Dave has been living in Berkeley, and now in Manhattan – a very young, handsome eager fellow! – Dave Henderson”

DH: “Thank you, and it’s a pleasure to be reading at the Naropa Institute and to be reading with Allen. I’m going to read some poems from New Orleans. This is called “Burgundy Street” (Burgundy Street – if you’re from New Orleans, and you go to a street that looks like Burgundy Street and you say “Burgundy” there, they know that you’re from somewhere else – “Burgundy Street” –  (“Four stories high..”..”the train from Congo Square is lost”) <
This (next) is called – “In Williams” – (“In Williams I would drink all seven hundred springs of Texas…”..,”thread the needle, we’re gonna do it”)
and this is called  “The Murals of the Stations” (for Marilyn) – (“The mural of the train station tells of pain and passion..”…”ancestors from the sea, what look like roaches”)”

[The heckler is first heard here, throwing out the non-sequitor and uncontextualized comment –  [“What do you think about the mercenaries in Africa?”]
AG: Oh, wait a minute, have we got to go through this? – No
[Heckler persists – “What does he think about mercenaries in Africa? [to David Henderson] Have you got any poems on that? It’s an important issue, you ought to be talking about it, where the people are being murdered…”]
DH: I have a poem that I’m gonna read in the next set, alright?
This is called “Song of Devotion to the Forest” and it’s after the pygmies of the Ituri forest (“This land is my block and my people..”.. and we love to sing, especially when you sing with us”)
This is called “Alchemical Notebook #3 – (“War in Africa north will end the world as we know it”…”… “…he will be a bad muthafucka!”)

[Heckler again – “He qualifies for freedom of speech. That’s what I qualify (for) too!]
DH: Okay
AG (to DH) (joking!) You want me to beat her up?!
DH: She’s possessed! That’s great!  [he continues]

This is a poem for a woman named Sally and her daughter. It’s called “Sally” (“Between two women, mother and daughter..”.. “… synchronizing eternity”) Let’s see, this is called ” Alvin Cash – Keep On Dancing”, and it’s for children of Intermediate School 55, Ocean Hill, Brownsville, especially the ones who play hookey, like I did. I used to visit the school and I used to hang out in the candy store across the street when I wasn’t visiting and some of the kids there would be in there too and they were doing the most amazing dances I ever saw. Anyway, the song they were dancing to was by Alvin Cash and it was called “Keep on Dancing” (“I Gotta Keep on Dancing..”…”I Gotta Just Keep on Dancing”)

[Heckler returns with an inaudible question]
DH: To the what?
Heckler : (The) Sandinista (Revolution)?
DH: Oh, Allen has a poem on that!
[Heckler responds with another inaudible remark]DH: (Okay) – This is the last poem I’m going to read this set. It’s called City Island” – (“Along summer homes near water barges..”…”…with love for no-one”)[At approximately twenty-and-a-quarter minutes in, Allen begins his set with a strict warning (to the heckler) –
AG: (You musn’t) interrupt me, or I really will… I’ll beat ya up, or something! I’ll do something. I don’t want to be interrupted. Period.”
[Heckler immediately interrupts]
AG: Goddam!… What is it?  The Buddhist thing is co-emergent wisdom, that’s right, co-emergent wisdom,
[Heckler: (I don’t like people who) beat up on women, you know.]
AG: (Well), I’m a fairy and I do!
[Allen attempts to begin the reading with a poem] “What’s Dead“..”What’s Dead..”
[Heckler: It’s a good thing you don’t have a wife or you’d kill her!]
AG: Please, please. I want to read poems now.
Student(s): Throw her out!
[Heckler interrupts with inaudible remark]
AG: Now you’ve interrupted me three times?
[Allen attempts to begin the poem again] – “What’s Dead…”
[Heckler: (You’re limiting) free discussion.]
AG:It is not free discussion! – I really will have you kicked out – or taken out – I won’t put up with it. Now either you shut up now or you get out..
[attempts resuming once again!]… “What’s Dead”
[Heckler: Okay, whatever you say, I expect you’re gonna call the CIA!’]
AG: [now exasperated] – I’ll put her out myself –  Goddammit! Just leave! – I won’t take it – [There follows the inevitable moment – the sounds of an altercation . The heckler shouts and rants. The audience is clearly very much on the side of Allen]
AG: [to Heckler] You’re giving me a nervous breakdown..I can’t stand it anymore.. Except… I’m letting her do it again! I knew that would happen.  [to Assistant] – Well, I wouldn’t follow her around, Susan [sic], but I don’t quite know what to do.
[Heckler: [returning to the fray with irony] –  Okay, ..let’s hear it here for freedom of speech!]
Student(s): Go home!

AG: Wait a minute. I have an idea. Let’s take a vote. Hold on, hold on a second. hold on, no hold on. There are three alternatives –  either.. even.. let’s see now, (one), if you’ll be quiet you’ll stay (either she is quiet and stays), or, two, she can talk and stay, or three, go out. We can take her. I’ll take care of it, So, one, quiet-and -stay is my preference.
[Heckler: I would say…]
Student:  Not sure if she can be quiet and stay..
AG: Okay..second..   Is that sufficient?  [Allen to Heckler] Would you be quiet and stay?
[Heckler: Yes, well, but ..]
AG: Would you be quiet and stay?
[Heckler: If I..].
AG: Yes or no?!!
[Heckler: I will read a poem and..]
AG: [previously pent-up frustration but now exploding in anger] – NO!! , No!  You will not impose your fuckin’ bad poems on everybody!  No. I  won’t do it. The alternative.. The alternative is…
[Heckler: Don’t be a petty monster!]
AG: ..(to) a captive audience..
[Heckler: Don’t be apetty monster]
AG: No? Okay, you gotta go. Okay, finish the vote. Shall we finish the vote?  Okay – Three or two? Number Three! – Three was “out”!) – Three is “out” . Is that a majority?
[Heckler: I want the microphone!]
AG [exasperated]: I’m not sure if I can handle it anymore!
Student: [to heckler]  It’s not your microphone, nobody else hear wants to hear you!
[Among great shouting and commotion (“easy, easy”) heckler is finally – eventually – escorted out]
AG: I can’t stand it anymore! too much! – for too many years…!