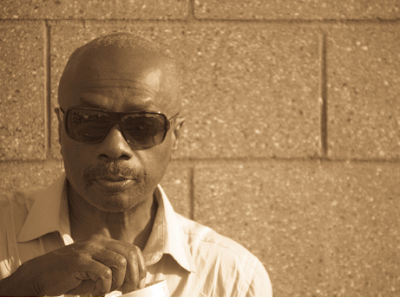 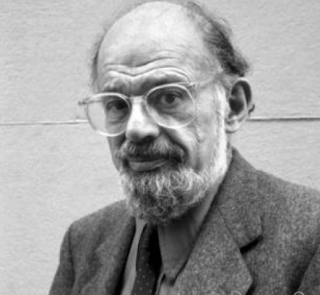 AG: “Grim Skeleton”  (“Grim skeleton come back & put me out of Action/looking thru the rainy window of the Church wall..”…”Agh! Who I’ll read this to like a fool! Who’ll applaud these lies”)

“Meditations at Lake Louise” (“At midnight, the teacher lectures on his throne,/Gongs, bells, wooden fish, tingling brass,/ Transcendent Doctrines….”…..”Where can I go, how choose, Either way my life stands before me,/mountains rising over the white lake 6 am mist drifting between water and sky.”)

and, last (before the break), a chain-poem written with Ron Padgett, 21 April, 1981 – I’m paraphrasing a Sapphic ode by Catullus –

“tunditur unda” is the Latin – “where the wave thunders underneath” – “If you go way beyond, where the wave thunders, there are the Asia Minor shores. Go tell my old girlfriend, if you see her before I do, that she can go suck off all those.. three hundred characters on the Broadway street corner.. (if) she wants to. As far as my love’s concerned. it’s nothing but a broken flower, cut by the plough, at the field’s edge..” – That’s a paraphrase of the Catullus poem. “tunditur unda” is the Latin for the wave thundering underneath, so the title of this is -“Thundering Undies” – Thundering Undies!
“Passing through Manhattan’s sodium vapor sidestreet glare/ With pink electric powder puffs overhead,/mmmmm, that Catholic churchwall’s old as Science/, tho’ Science is older, but O, please don’t tell me about it tonight./ no pain please in the strange spring light/tho’ my baby’s waiting on the corner with 160 pounds of meat/on her 148 bones all for sale for 25 bucks./ Furius & Aurelius, friends, now that we’re back in town, tell her/ to take cosmetics from the air, and let the dark blue city/ sift slowly down to where lamplight shadows her cheeks/ & her lips shine dayglo purple, moist with the sperm of her 300 adorers./ – O come let us adore her, weird Madonna of the street/and not in great shape either tho’ we’re in far off Elsewhere/with our sad souls, angers and aching teeth! Too late for old loves,/ but a little nosegay of pansies cut by Time’s tractor where/ the pasture meets the dirt road and my heart meets the flower-bed/ dug up years ago to make East 12th Street where you float/ a little off the ground, thinking of the withered posy of pussy-/ willows, cox-stamens & rosepetal lips dumped in the garbage can/ by unthinking lovers that I used to sleep and giggle with/crazed, hateful & disappointed Catullus.”

[tape continues with David Henderson, catching him, in media res, reading from his poem, “The Exiled”] – (“…about a man without a country/that story/about this white dude who did something to America/something that made him have to sail the seven seas/never to touch land/never to have a country…”… ….to something farther away,/ materially across continent and water/ to nothing/ to nothing so real in its utter presence/ as to make him tremble/ at the scent of memory”)

DH: Thank you, thank you. This is called “Nobody” – Nobody -(“For the Revolution, the Third World War, three eyes….Pan Africa forms, new Loa”)

Speaking of Loa (which is a Voodoo term for Gods), there’s a woman I alluded to in the poems about New Orleans. Her name was Marie Laveau – and she was quite famous in New Orleans from the beginning of the 19th century and almost until the end, a lot of interesting stories about her. This is a couple of ballads –  “Down in the Old Town, Old Mary, she know..”…”When there’s fire on the shore/Mary, don’t you weep no more”) –

“There was a photographer in North Beach who passed away recently who, actually, was lost out in the middle of San Francisco Bay and his name was Andre Lewis, and what was particularly important to me about Andre Lewis was that he was a person who made me feel very much at home in North Beach in San Francisco. He was an Afro-American photographer,, and he had a lot of.. (well, he still has) a lot of marvelous photos (especially of Bob Kaufman) and.. anyway, this is a poem written to the memory of Andre Lewis, Afro-American photographer of North Beach, San Francisco. It’s called “In Greeting..”, “In Greeting or Farewell” (“He handled his camera like Nat Love“… “..captured so much, and maybe each other in greeting or farewell‘)
“Okay, this is the last poem I’m going to read and people have told me, out in California, they said, “Well, you never write many poems about California”. So I wrote a poem about California. It’s called “California Thirteen” – I lived near a highway that was called California Thirteen and was actually Ashby Avenue, for any of you who know Berkeley”
[David Henderson concludes with a long poem]
(“To rise with the rulers of the world..”…”into another world, into a third world, .Baha continuum of California town”]

AG: The next) number will be a non-smoking, anti-cigarette, non-commercial, “Put Down Yr Cigarette Rag” (“Don’t smoke, don’t smoke…”)
This is followed by a version of “Capitol Air”  (” I don’t like the Government where I live”..) and “Broken Bones Blues” ( “When you break your leg, there’s nothing to stand on…” ) with, as before, (see his rendition of “Birdbrain”) improvisation – (“…my soul is a whore, my soul is no more”).