The Tradition of Reznikoff & Williams 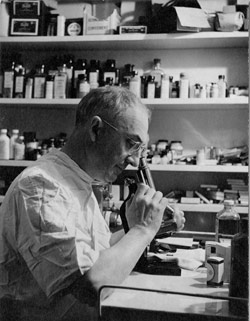 [Allen continues with his 1981 Naropa class, drawing distinctions between the poetry of  David Cope and that of  William Carlos Williams, placing him closer to Charles Reznikoff’s work]

AG:…..in that Williams was still preoccupied by some kind of modernism, some kind of Cubist abstraction, whereas Cope was really direct, (writing) just simply directly, writing out of his… (Allen is distracted – is that gone around all the way, this paper?)….whereas Cope was directly writing out of his eyesight and his… I think he’s more close too the nose. I think Cope is more close to the nose than Williams in some respects. At any rate, but he’s more in the humanistic heartfelt situation sketching that Reznikoff is as an Objectivist and I do recommend Reznikoff, Williams, and Cope, if you get a chance to check out that style. It’s simply.. unless you can get that close to the nose and that clear about real life, I don’t see how you can go on and write anything more complicated or more Shakespearean or more Romantic or more visionary, without first having touched ground. So, someone, who was somewhat of a Buddhist scholar, noticed that that was the first thing that I presented and thus, like in Buddhist studies, presenting  vipassana first – samatha vipassana – that is just focusing attention in one spot  and bringing the mind’s attention to one focus and one spot, and it’s something real. Yeah?

Student: In your earlier books, did you feel that you were in the tradition of Reznikoff and Williams?

AG: I didn’t come on to Resznikoff in extenso, with a lot of work, until much later, but, yes, Williams. I wrote two early books between the age of eighteen and twenty-three. One is called The Gates of Wrath, and it’s rhymed poems imitative of what we’ll be studying today and in the next couple of classes – (Andrew) Marvell, (Sir Thomas) Wyatt, Henry King, James Shirley, Seventeenth-Century poetry, Sixteenth-Century lyric forms. And I sent them to Williams who said, “In this mode, perfection is basic, and these aren’t perfect.”

But I didn’t understand his style, because I was writing, “Come live with me and be my love /And we will some new pleasures prove..“, things like that, or, “How vainly men themselves amaze/ To win the palm, the oak or bays/Who winning won one white night of grace/ Will weep and rage a year of days/ Are all these lovers yet undone by she and me to love alone?

So I was just imitating or paraphrasing, or taking off from, the rhythms, of Sixteenth-Seventeenth-Century poetry, and I didn’t understand Williams’ writing, except, one day, I was.. I was reading it, and… it just didn’t rhyme, it didn’t seem like poetry, it didn’t seem poetic, in the sense that it was simple abstract, and I didn’t get what his point was. (occasionally, there was some picture that I could see). Then I heard him read at the Museum of Modern Art and he read a poem called “The Clouds” (which I think I mentioned, did I mention that here last time?   “lunging upon a moth, a pismire..” .

AG:  It’s a poem that ends.. – “The Clouds” (in) which he’s describing Imagination taking flight beyond the Earth and losing touch with reality – “lunging upon a moth, a pismire, a butterfly, a…….” – and that’s how he ended the poem – “a”, dot-dot-dot-dot-dot-dot-dot  – “Imagination lunging on a moth, a pismire, a butterfly, a…….” – [Editorial note – the exact last stanza reads – “The clouds remain/- the disordered heavens, ragged, ripped by winds/or dormant, a calligraphy of scaly dragons and bright moths,/of straining thought, bulbous or smooth,/ornate, the flesh itself (in which/ the poet fortells his own death); convoluted. lunging upon/a pismire, a conflagration, a …….”]

He was on the stage of the Museum of Modern Art going.. [ Allen gesticulates, mimicking Williams here, displaying how he would have appeared] and I realized that he was just talking, that there was no difference between his poetry, the diction and the rhythms of , his style of poetry, and his actual speeches as a doctor. You know, “You’ve got the clap”, “You’ve been running around, you’ve got..”, So, same thing. And I realized that it was possibe to write poetry that was identical to ones own speech (selected moments of our own speech), (of) our own perception). So then I looked into my notebook scribbles, and found a number of hot little items.. little interesting things, like looking out of a window, describing a bricklayer, and I arranged them in lines. I faked it. I faked a bunch of modern poems and Williams’ style, arranging them in lines like he did – broken lines , some short, some long, and then sent it to him, and he said, “This is it!” Have you got any more of these?…I shall see that you get a book” – And I was amazed – that was it, all it was, it was that easy. And all this time I’d been trying to write poetry. So then I quite writing poetry, trying to write poetry, just wrote writing. You see, I just wrote, you know, clearly, and stopped trying to write poetry. And from then.. that’s the secret of my success story – just stopping trying to write poetry, stopping trying to sound poetic just to sound poetic. Because the whole point is that most bad poetry is just people who are recycling things they’ve read in books already and not doing it as well generally, although occasionally, like Ezra Pound, they might recycle it and bring it to a higher order by being so smart about it, you know, that they get the essence of it (and we’ll see an example of that in  (Ezra) Pound, today). So, yes, then, the answer then is yes, what I’ve tried to do is t reduce my style to absolute, realistic, straightforward, journalistic, repertorial, mind-flash talk-talk. And then figure ot how to arrange it on the page interestingly, by various means (which we can go into later, when we get to more modern poetry).

So I went through that. So the reason ..the reason that I’m laying this trip on you, is because I went through that, and the only thing that I can teach you is what I went through , the only thing I can really instruct, or communicate is my own experience (and that was a really salutary influence for me – to have to cut down all my divine rapture (and I really had had visions, I really had visions, you know, and was after heaven, and I knew I was..after something, but, what I had to do was to cut down my means to the most realistic possible building-block).  I started at the beginning abandoning poetry, abandoning any idea.. any preconceived idea of what poetry is, and just begin with my basic naked perceptions and my own mouth-talk, and then build a poetry out of that . Out of the building-blocks of your actual speech and actual perceptions, rather than daydream-y, you know, like, when a gypsy plays his violin or “my pheasant, peacocks in celestial colored heaven”. I mean, something that doesn’t look like Celestial Seasonings. [Editorial note – Boulder-based New Age company] So..a little more earthy –  to begin with an earthy… to begin grounded with an earthy form. Maybe I was too harsh in attacking Romantic longings last time, because the ultimate object of Romantic longing, which is to be one with eternal space and time, is a noble, worthy, and realizable objective, and it’s the task of the poet, or one of the glories of poetry that can show that glory. But, to do it for real, and not just be a daydream-y, pimply adolescent, at the age of fifty, you actually have to have real meaning, it has to be referring to something that’s real and common to everybody, so that everybody can pick up on

[Audio for the above can be heardhere, beginning at the beginning of the tape  and concluding at approximately nine minutes in]