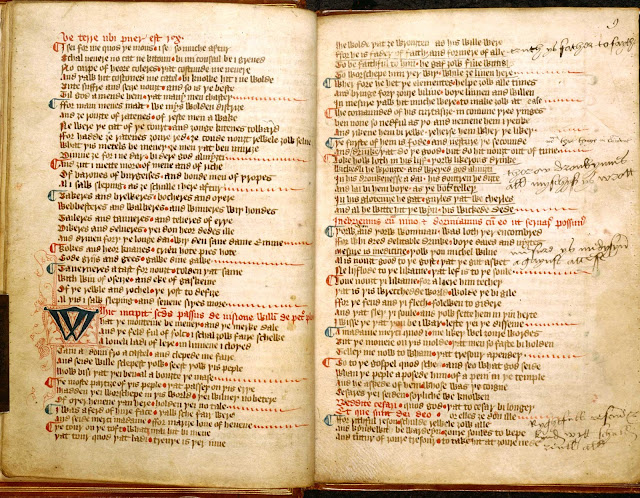 AG: You know I’m beginning this whole course, which is a survey in English language poetry, in reverse, by reading you the latest, the cream of the latest, rather than just begin a little with Shakespeare. Well, next time, you might start reading (Ezra) Pound”s “The Seafarer”, (on page nine-nine-four – “Seafarer”). If you find any other anthologies which have a little bit of “Piers Plowman”, (which is not in here)  –  William Langland’s “Piers Plowman“, for that alliterative verse, you might check it out in some anthology. I think.

Student: What was that again?

AG: “Pies Plowman” –  P-I-E-R-S  P-L-O-W-M-A-N – William Langland. It isn’t in the Norton Anthology. You can find it in this [sic] if you see – the Auden-Pearson five-volume “Poets of the English Language“. It’s a really good survey of English poetry. Auden had a really intelligent mind and it was a poet selecting poems, so there’s a lot of little specemins of  poetics in here that you won’t find elsewhere. If you don’t know it, it’s just a great part of your armament as poets, if you’re interested. The five-volume Viking Press (it’s now I think in paperback, if it’s available) – Poets of the English Language, edited by W.H,Auden and Norman Holmes Pearson (I settled on the Norton Anthology (of Poetry) as the biggest, thickest, cheapest, but the Auden anthology has a couple of interesting things, and you’ll find some of “Piers Plowman” (It’s a fourteenth-century poem, written  and in alliterative verse). And so, Pound’s translation of “The Seafarer” in the Norton anthology on page nine-nine-four to nine-nine-six is similar. And, why don’t you just  take a look at the early, at the early pages of  the Norton Anthology, just the lyric stuff up to …oh up to the popular ballads (skip the Chaucer – too thick and heavy for me to go into except for a few lines. I want to stick mainly with lyric, and musical lyric, rather than heavy, heavier work)

So if you skip the Chaucer, that’s about forty-four pages. So from page three to page one hundred Or so,  just look in and out, enjoy yourself, over the next couple of days. You don’t have to read everything, just read, read what attracts your eye. You know, skim, and when you see pretty lines, follow them up. It’s too much… I found, myself, over many many years in reading poems and going to college, that it was not really profitable for me to pay attention to every poem that I was assigned, (or even pay attention completely to some poems that I thought were really great). I would find that just certain lines stuck in my mind and I would read the same lines.. I would read the poem, but I.. would go blank after two lines, but, “For god’s sake, hold thy tongue and let me love” – I would remember that – and maybe the next two lines of the poem by Donne, and (but) I still don’t remember how it ended! – So, whatever sticks in your mind, whatever comes naturally. But at least run your eye over the page and look around with interest and curiosity at what’s going on. So, in other words, the assignment is about sixty pages of poetry there to zap through, and whatever amuses you pay attention to and follow up. Later on in your life, you can go back and read the (left hand) or carefully examine the (left hand) –  I…  a couple of things… since I’m teaching, I’m going back and reading through poems that I know by heart the first six lines or some lines, that I never did read the rest of! – I find that’s pretty universal among intelligent readers. You absorb certain things and don’t (others). So I wouldn’t want to force on you anything I can’t do myself. So…