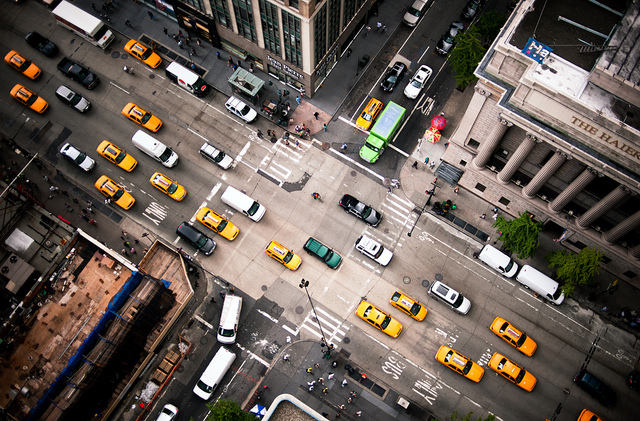 AG: Another corollary to – “The natural object is always the adequate symbol” (Ezra Pound). The corollary is by (Chogyam) Trungpa here – “Things are symbols of themselves”- they stand out in their own stark obviousness, he says, if you see them (so it’s a quality of your own attentiveness and perception, grounding your mind on objects, fastening your mind on objects, and focusing  your attention single-mindedly that makes it possible for you to see things as symbols of themselves, without need for things being a symbol of something else). Just.. In order to see a tree stand in its own eternal form, in the space of eternity, all it requires is to forget about eternity and just take a look at the tree, very clearly.

Like, as follows – [from David Cope‘s poems] –  “thousands of opera goers spill into the street,/ a clatter of footsteps/ shouting at taxi-drivers”

AG: “we sleep” – it’s like a riddle, I think that’s a riddle – “we sleep./There are engines, hoarse shouts,/ a procession half in shadow, moving along the  streets.”

Student: He’s talking about (how) it’s night, and, you’re not aware that it’s going on but, life is going on

AG: No!!!  You’re missing the whole point!- It has to be not a generalization at all he’s interested in, it’s probably a fire-engine. I’m trying to figure out what kind of engine, not “life is going on”! – Jesus, I’ve been talking for an hour, without making any…
No! – please read. .. [Allen reads the poem again, slowly] – “..There are engines, hoarse shouts,/ a procession half in shadow, moving along the  streets.”

Student: (It’s a parallel to the people traveling?)

AG: No, I think it’s, literally, people shouting.  The engine? – I figured it may be some kind of…

AG: That might be..  garbage-collectors? – but what’s interesting about that poem is that there’s something real going on, something ordinary, like either a fire-engine, or fire in maybe the block darkened, or burnt-out, or something, or..

AG: Garbage-collecters seems to be the closest to.. actually, I mean, you see, the whole point I was trying to make was something real, rather than a generalization. In fact, I’m just not interested in generalizations and I don’t think the human mind is either. It may be that this civilization, which is bent on suicide, has gotten itself up into a place where it can’t subsist on anything except the food of generalization, and that’s why it has cancer and is about to blow itself up! – But, just sort of keeping the mind down to what’s real, rather than..

AG: “we sleep..”  – Actually, I’ll read the one before, so we get.. Actually, there are three poems..three poems called  “Music” . The first I didn’t think was so good so I didn’t read it, but, since that last one is so mysterious, maybe, the other two will cast light on it – The title – “Music” – I –  “a group of children walks thru Central Park/teaching the world to sing/in perfect harmony” – (a little poem) – II – “thousands of opera goers spill into the street,/ a clatter of footsteps/ shouting at taxi-drivers” – III -“we sleep./There are engines, hoarse shouts,/ a procession half in shadow, moving along the streets.”

AG: The engines? — heard in his sleep – literally, sleeping  – And then he wakes from his sleep, I guess

AG: thousands of opera goers spill into the street,/ a clatter of footsteps/ shouting at taxi-drivers” Maybe I’ll write him and ask him? – Why not? – Ask the definite article  – I’ll write him, find out what it is. It’s very suggestive, because it’s just almost on the surface of obviousness but it isn’t quite, and it may be that that’s why it’s so interesting, it’s that he has actualities there – “engines, hoarse shouts,/ procession half in shadow” – but he doesn’t.. you know, like, it’s just left under the surface, it doesn’t have to become enough to become labeled.

DC replies to Allen in Eternity, October 2015:   “Discussion around “we sleep”, here’s the background. On my first two visits to NYC  (1971 and 1972 or ’73), we stayed at my younger sister’s place which she shared with two or three other young professionals – their apartment, somewhere in the 70’s, three or four blocks from Central Park, very different from the kind of life I was leading then. As a country boy, I’ve always been amazed at the late-night life of cities – in NYC, the trucks, taxis, jackhammers, etc, running throughout the night, filling the canyons with their low rumble,and the late night procession of crowds moving below. I still have a distinct memory of waking late at night and looking out the window at these crowds moving below, “half in shadow” and thinking to myself of “the silent cortègein(Ezra) Pound’s “The Coming of War: Actaeon”.That image of the city’s nocturnal procession and the memory of it summoning that half-impenetrable but deeply-memorable image from Pound’s poem were among those that popped up quite naturally as something important to record. So that’s the tale. It’s nothing deep or difficult, just an experience that set me off and which seemed one of the better things I’d written back then.”