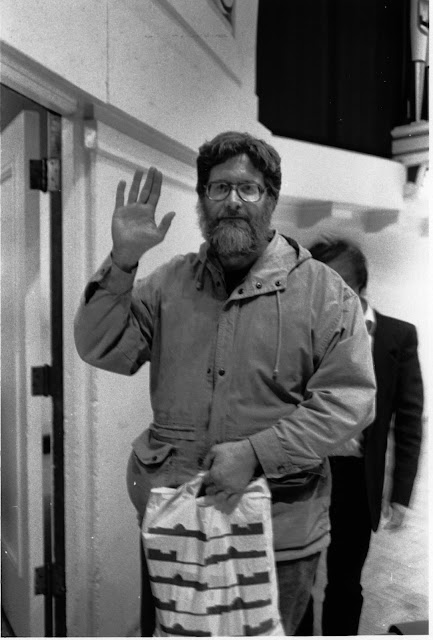 AG: Now,  I want to skip on to a modern poet called David Cope, who’s about thirty years old [Editorial note – this is in 1980] who writes, very much, specifically in this tradition of “minute particulars”, specificity, ordinary mind reality. And I have.. For various reasons, I’m reading through all of his poetry right now, (which consists of little, funny, hand-made, home-made mimeographed books of poems that he’s put out). The first one that I got was…

This is more or less what he thinks he looks like. [Allen displays a self-portrait by David Cope] – Actually, he looks much more mild than that – He makes his own drawings… 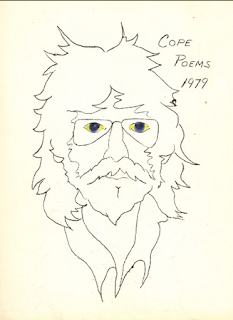 So what I would like to do now for the rest of this reading… (What time is it now?)

Students”  A quarter to..

AG: (We have till nine-thirty) –  is read you through the complete works of David Cope – 0r selected, (the) selected – not everything, just…  What I was reading this for was to look through his work and find what was tangible, in the sense that I’ve been preaching. He is influenced by Williams and Pound and Reznikoff. (and included among these is a really beautiful elegy for Reznikoff). And, in some respects, he’s almost indistinguishable from their practice, which may seem imitative or a drag, but, on the other hand, I don’t know anybody else, in the entire United States, who can write like that, that clearly and that closely, and that directly, about ordinary mind, particular noticings, and make them magical through his attentiveness. In other words, the poetry and the magic, or the spiritual aura, comes from the quality of attentiveness. So that you see a thing so clearly that you see its relations to other things, and that’s an advanced perception, it becomes an advanced perception, or an uncanny perception, (the sort of thing you might have on LSD,
if you were looking at, you know, like things, rather than clouds, not faces in the clouds but relations between dewdrop and spider-web and spider-web and grass where it’s hanging, and the flora and fauna –  in other words, the microscopic observation of minute particulars, rather than imaginary daydream-y constructions). So, for this particular quality of minute particular, minute particularity, or close observation, I like David Cope, and, actually, City Lights is publishing a selection of maybe about thirty pages of his [Editorial note – this publication, however, never materialized]. So I was reading through to find what are the best thirty pages out of all this work. So I’ll start reading. I’ve been looking over it over the last couple of years and I checked out the ones I like. So I’d like to read some of them to you.

“The ancient bandleader leads a serenade/while balancing on one foot;/ old women still dream he’s the one/ their white fat arms reach for him/ as he staggers among the flying streamers.”

“The Line-Up” – “arriving customers take a number;/there is the expression of permanent boredom,/the shuffling feet./children are given dimes to start up the hobby horse,/ yawns.  everyone stares at the floor/or at the clerks./there are no conversations./
his counter space”

Student; Can you read it again?

AG : “The Ferry” [Allen reads the entire poem]
That’s really packed-in. A ferry-ride. He’s got the whole.. It’s like a Chinese, a little Chinese painting, you know, with a few soft sketches, a tremendous amount of subtlety, and knowledge of nature. Like “the gulls plung(ing) behind the boats”  and the “mothballed carriers”. The “iridescent gasoline slick is a little bit like “the (fat black) fungus that (once) was chewing gum” (in Charles Reznikoff‘s poem). It’s an archetypal thing that you see on streets..

“Empty Street” – “the yellow flashers point away to the left;/an empty street…”….”an old man stands against a No Parking sign,/ grinning, without teeth” – “Empty Street ” 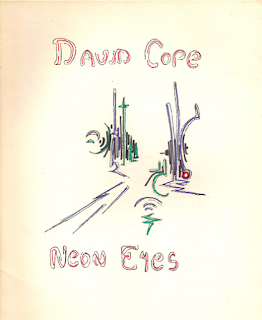 This is so closely related to Williams’ practice, or Reznikoff’s, that it’s amazing.  And you could say the guy’s just imitating, except that you can’t imitate that, you actually have to use your perceptions. In other words, you have to go back to organic nature. You can initiate their method, but it isn’t so much imitation as actually practicing their method.
It’s  like saying, “Aw, you’re just imitating Buddha”, when you sit and do… Iif you’re sitting and in meditation practice, you could also be accused of imitating Buddha!  (In fact, there is a poem by Ryokan saying “Well all I’m doing is sitting imitating Buddha).  If he is imitating, but he is imitating something so elemental that it involves his own eyeballs, and his own sense-perceptions, and his own basic mind. So I’d say it’s… If you could possibly succeed at imitating this style of writing, you’re writing something universal, clearly. I don’t think you have to worry about imitating, in that sense.

“The Evidence” – “For seven months, the Central City Police Department ..” (“the Central City P.D.”, actually) “For several months..” – called “The Evidence””For seven months, the Central City Police Department has kept/ a two-inch piece of human ear in a freezer/ while the state prepares its case/ against the man who bit it off/the assailant & his victim were friends/out for a night on the town./late in the night a fight erupted; one kneed the other in the groin,/they threw beer bottles at each other/across the barroom and finally came to fisticuffs/when the police separated them,/ the unusual bit of evidence was found on the floor”

“Prophecy” – Well,  two “Prophecies”  – One – “Ford arranges his news conference/ in the library, with a fire;/ he wants it to seem like FDRtoday, he prophesies a tax break./ he calls (for) the end of recession!” –  Two – “the coach: the steelers are gonna win/ because they’re hungry!/the steelers are gonna win/because they didn’t have no breakfast today!” – It’s called “Two Prophecies” The deft juxtaposition is funny – One is President Ford at a news conference. –  “..he prophecies a tax break./ he calls (for) the end of recession!”. Actually, what’s funny about that, it’s really. . It’s really a precise, humorous pointing-out the absurdity and fatuousness of Ford’s propositions, merely by repeating them, by taking them down – “today, he prophesizes a tax-break./he calls (for) the end of recession!” – At the end of the day, it’s obviously a.. hot air (and he doesn’t have to say it’s hot air!) –“No ideas but in things” – All he has to do is put the thing down and it stands out stark in its own obviousness.