AG: So to begin with now, beginning with Ed Sanders again.. but a different recording by Ed Sanders than the one I found last night. I mentioned that he was working with the five-finger electronic pulse-lyre (to substitute for the four-stringed tortoise-shell lyre). Mixolydian mode – I don’t know if he’s actually using a Mixolydian Mode – This [that I’m about to play] is a performance by Ed Sanders of the “Hymn to Aphrodite” with his pulse-lyre – December 1978, I think, or (19)79 – December (19)78, at the Nova Convention for William Burroughs. This is not a good performance. It was one of his first public performances trying on his pulse-lyre (in other words, (trying) to take the Sapphic lyre, and make an electronic instrument out of it, but an instrument that one man could carry around

(Student arrives late – AG: “Here we go again…will you take a copy of.. there’s an anthology .. is Mike still in there? ..Well, ok… and take an Index too.. and they’re two dollars, if you can afford it. (But) If you can’t afford it…”)

So, (as) the substitute for the Sapphic (lyre), he wanted a modern electronic instrument, but he wanted one that was portable, that he could carry around, that could be operated by touching the fingers together likes this [Allen demonstrates] to make tones – kind of robotic electronic tones but actual different tones following the Sapphic tones. So he’ll begin with the “Hymn to Aphrodite”, and, for some reason or other, he wanted to show its correlation with English language poetry, so the verses of the “Hymn to Aphrodite” are sung in English and Greek and they are mixed with verses by William Blake – “The modest Rose put forth a thorn,/ The humble sheep a threat’ning horn”. I forgot..you’ll hear it, but you’ll….you’ll hear the rest of it, a little quatrain, and then also one other little poem by Blake. He was just trying to show (either) some correspondence of how he would treat Blake that way and how he would treat Sappho that way

Ed Sanders: Sappho was born on Lesvos around 650 BC and she started a sort of Venusian Vassar and invented her own mode of verse called the mixolydian. And I’m going to do tonight the two extant poems of Sappho in the original Greek, and I’ll also try to do the translation. The first poem by Sappho I’ll do is the “Hymn to Aphrodite” and it is sort of a Fundamentalist Aphroditean dance, in which Sappho summons from Heaven Aphrodite. and Aphrodite comes.
Hymn to Aphrodite  –  “Splendor-throned deathless/love-ploy-plotting Aphrodite, /Daughter of Zeus, I pray to thee./Do not overwhelm my heart/with cares and griefs,my Queen/ But come to me now, if ever now and/again in the past, listening from afar/, you heard my prayers and harnessed/your golden chariot to leave/your father’s realm, thy chariot/drawn by two swift swans with/thickly flashing wings from heaven/through the middle of the upper sky/down upon the darkling earth….”

AG: He’s got his own translation there (I assume you’ve all been following it.You might turn to some (other) translation to see how it..,  to the “Hymn to Aphrodite”, which will be on  page three…of the (Willis) Barnstone (edition of Sappho)

” The swift swans brought thee/quickly near, o Aphrodite/ and you asked me,/with a smile on your deathless face,/ what it was that/ made me suffer so, and why/ was I crying out, (and) what/did I want most specially/ to assuage my raging heart?/ “Whom shall I persuade”, /you asked, “to bring you/the treasure of torrid love?/ Who, o Sappho,/ who wrongs thee?/  If she flee thee/swiftly shall/ she dance at/ thy heels/ And if she not/ take thy gifts/ swiftly shall she/ give/ And if she does not,/ swiftly shall/ she glide in/ the beams of desire/ even be she unwilling/at first” you said/ to me Aphrodite/ O come to me once, o/ Aphrodite and free me from this harsh love pain!/ And that which my soul   craves to be done/ do it, do it,  o do it!/  You thyself, in living person/ be thou my ally!”

Ed Sanders:  I’ll do it in the Greek now and also I’m going to do it sandwiched in with a couple of short poems by William Blake, one “The Lilly” (from “Songs of Experience”) and the other “The Question Answered “ (from “Poems and Fragments”)  [Sanders continues his performance] 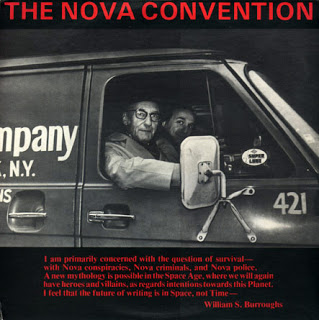 AG: So that record (that recording) is available, actually, printed on John Giorno‘s Nova Convention two-album set, which was a celebration of (William) Burroughs in New York, about a year-and-a-half ago, where John Cage, (Ed) Sanders, Patti Smith, a bunch of rock and music and poetry people got together… so that’s available, if anybody is interested in getting it (but I think we have it in the library also , if anybody else wants to hear it).