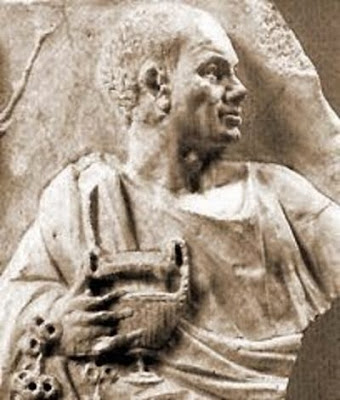 AG: Then Horace. Now Horace was the next of the Romans that picked up on the Catullun line and from Sappho. And we didn’t actually get to that, did we, at all? – did we ever bring up Horace, yet?  [to “Mike”] –  Do you have any Horace that you’re prepared to chuck out? or is it too sudden? – We have some in here [pointing to the classroom anthology],  so maybe do one (from) in here? – Can we find the first page of Horace translations? It’s abour half-way through.. half-way..a third of the way down maybe.. at the end of the Catullus

AG: (James) Michie, again,  yeah, same guy that did the Sappho. Has anybody got that? Lower left-hand side of the page – “Less and less often now”. It’s three different translations of the same poem, so, actually – lucky!.
See, it’d (be) (number) one-twenty-five. [to “Mike”]  If you have that one too, Mike (sic)?, do you have one-twenty-five prepared?  Book One  – twenty-fifth ode in Book One….Is that one of them that you have found)?

AG: I see. You didn’t do that one. Okay. Well, that’s one we do have so I’d like to check it out . John Frederick Nims was a modern poet, did a really….. if you look at the adonics – “firm in its framework”, “You – you- you just lie there”, “wind from the mountain“, “not without heartache”, “figure the hell with” . And then, the next guy, Rolfe Humphries< says.. one has “firm in its framework “, one has “faith with the threshold”   “Thracian comes brawling”  “not without anguish”, ” “chilly old Eurus”.. The other one by Robert Fitzgerald isn’t done in literal Sapphics.

This is, again, sort of a ribald poem (so apparently the  Sapphics do go along with, like, frank statements). Anybody want to read that? Anybody got a good voice?  From the top of  (page) one-twenty-five. John Frederick Nims’ translation?     Come on, some cocksman!
Student:  Okay.. The first one?

Student [reads the John Frederick Nims’ translation of Horace 1-25 in its entirety]: “Ribald romeos less and less and less berattle/your shut window with impulsive pebbles./Sleep – who cares? – the clock around/The door ‘s stuck/firm in its its framework,/which once, oh how promptly it popped open/ easy hinges. And so rarely heard now/ “Night after night, I’m dying for you, darling!,/ You – you just lie there”/Tit for tat.  For insolent old lechers/  you will weep soon on the lonely curbing/while, above, the dark of the moon excites  the/ wind from the mountain./ Then, deep down, searing desire (libido /that deranges too, old rutting horses)/in your riddled abdomen is raging/ not without heartache/ that the young boys take their solace rather/ in the greener ivy, the green myrtle;/  And such old winter-bitten sticks and stems they/figure the hell with.”

AG: Okay, somebody else want to read the second translation of that, by Rolfe Humphries?

Student (2): [reads Rolfe Humphries’translation of Horace 1-25 in its entirety]
“Less and less often now, the horny young men rattle your bolted shutters, and the door/ That used to turn on easy hinges keeps/ Faith with the threshold./Seldom. or never, now, you hear them crying/Across your sleep “Lydia, let me in,/ The nights are long, and wasted,  and your lover/ Is dying for it. “Finally, never,/ an old woman living/ Unnoticed in an alley, all alone,/ You grieve for those hot rowdies, while a cold/ Thracian comes brawling, Rattling the shutter/ a cold Thracian wind/ No good for you, in whom the heat drives/ Mares to the stud-horse, burns the ulcered loins/Not without anguish./ That high young men go happily elsewhere/For their green ivy and dark myrtle, leaving/The withered leaves to winter’s boon companion, /chily old Eurus”

And then there’s a third translation by Robert Fitzgerald. Well, we’ll see what that’s like. Anybody want to read it?