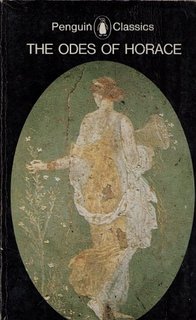 [Allen continues with his review of his classroom anthology]

AG: And the Sapphic Catullan form was picked up by, as we have in here (in this xerox anthology),  Sir Walter) Raleigh and (Sir Philip) Sidney. So, if you continue turning (the pages of the anthology), you’ll get up to Raleigh. (If you can find that, it’s about three-quarters of the way – okay, let’s find the Raleigh first, then we can pay undivided attention) – about two-thirds down – It was called the perfect Sapphic! … here was are – the perfect Sapphic in English) – about two-thirds of the way down, at the bottom…

“What slim youngster, his hair dripping with fragrant oil/ makes hot love to you now, Pyrrha, ensconced in a/ snug cave curtained with roses?/Who lays claim to that casually/ Chic blond hair in a braid? Soon he’ll be scolding the/Gods, whose promise, like yours, failed him, and gaping at/Black winds making his ocean’s/ Fair face unrecognizable./ He’s still credulous, though, hugging the prize he thinks/Pure gold, shining and fond, his for eternity./Ah, poor fool, but the breeze plays/ Tricks. Doomed, all who would venture to/ Sail that glittering sea. Fixed to the temple wall,/My plaque tells of an old sailor who foundered and,/Half-drowned, hung up his clothes to/Neptune, lord of the element.”

AG: That’s not a Sapphic.

Student: Yes it is.

AG: It’s an ode… (an example of the) ode-form, which…  (John) Milton translated that particular poem. Do we have..? We don’t have that, do we, here in the anthology? –  A fragment of it is actually printed in one of these…on one of these sheets, just a little fragment of it, the last half. I’ll bring it in another time. It’s the same form that Milton used and (Andrew) Marvell used for his.. Marvell’s ode on Cromwell, – (“An Horatian Ode upon Cromwell’s Return from Ireland”)  (“As if his highest plot/To plant the bergamot”)

“What slender Youth bedewed with liquid odours/Courts thee on Roses in some pleasant Cave,/Pyrrha for whom bind’st thou/In wreaths thy golden Hair,/Plain in thy neatness? O how oft shall he/ On Faith and changed Gods complain: and Seas/ Rough with black winds and storms/ Unwonted shall admire:/Who now enjoys thee credulous, all Gold,/ Who always vacant, always amiable/Hopes thee; of flattering gales/ Unmindfull. Hapless they/To whom thou untri’d seems’t fair. Me in my vowd/ Picture the sacred wall declares t’ have hung/My dank and dropping weeds/To the stern God of Sea.”