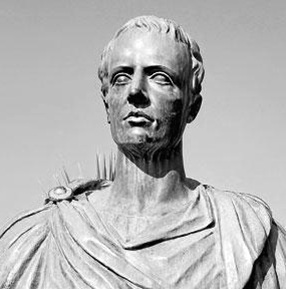 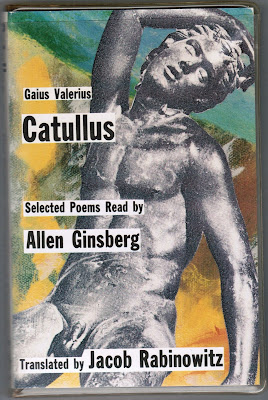 “You would love Catullus. I read a collection of translations edited by an Aiken [The Poems of Catullus – edited by William A Aiken (1950)], and am reading him in Latin now with aid of a pony. Selections in anthologies won’t give you the idea. Get a book of translations from all times, from library. The Aiken book is good, includes translations by Ben Jonson, Byron, Landor, Campion, etc”

And a few months later, to Jack Kerouac – “Dear Kind King Mind  – “I’m sick, kind Kerouac, your hallowed Allen/is sick in eternity! laboring lonesome/and worse and worse by the day by the hour…/but I need a little sweet conversation..” (this draft, in anticipation of the later completed poem, “Malest Cornifici Tuo Catullo“ (on meeting Peter Orlovsky) – “I’m happy, Kerouac, your madman Allen’s/finally made it; discovered a new young cat..” (echoing, of course, Catullus #38 – “Malest, Cornifici, tuo Catullo/malest, me hercule, et laboriose” – “I’m ill Cornificus, your Catullus is ill, by Hercules, and most unbearably…”)

In June, the following year, he writes, “I am reading surrealist poetry and Lorca, translating Catullus from Latin”

“Let’s live, my Lesbia, let’s love and value/rumors of senile severities not worth/pretty pennies to us. Suns set and suns rise/again, we with brief light rise only once then/set in earth our night is perpetual sleep…”

Allen was also familiar, subsequently, with Louis Zukofsky’s homophonic translations of Catullus, although Zukofsky didn’t begin his project until later (1958)

He was certainly familiar with Thomas Campion‘s version of Catullus #5 (via the Aiken collection) – “My sweetest Lesbia, let us live and love; and though the sager sort our deeds reprove,/ Let us not weigh them. Heaven’s great lamps do dive/Into their west and straight again revive,/But soon at once is set our little light,/Then must we sleep one ever-during night…

Allen retained his interest in Catullus throughout his life, an interest both in his achievement as a poet and as a figure of liberation (like himself, regarded, in some quarters, as “obscene”, and thus suffering opprobrium and arbitrary censorship)

– “The more racy poems of Catullus”, Allen notes, “were only allowed to be printed in Latin, in the Modern Library edition, (everything in English, but when it got to the boy-love things, or girl love, things in was in Latin)”

The emergence of an unexpurgated Catullus comes late – and of the various editions – On Jacob Rabinowitz’s, William S Burroughs writes:
“Beautifully translated…trivial, frivolous, profound, obscene. Read the fossils of lust”
Allen agrees – “What a favor! It’s lighthearted, the most readable I know” 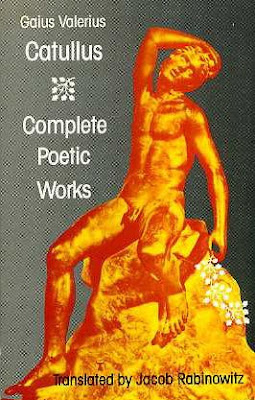 So much so that he collaborated with the author in an audio-book presentation of selected poems – (“This selection includes all of Catullus’ famous love poems to Lesbia and to the boy Juventius, and some of his happily scurrilous lyrics, showing toga hiked up hard. Rabinowitz’s translation grasps the elegance, passion and nastiness not only of this Roman rude boy, but also of first century Bc Rome, the greatest century that ever lived”)

Sit back and enjoy.