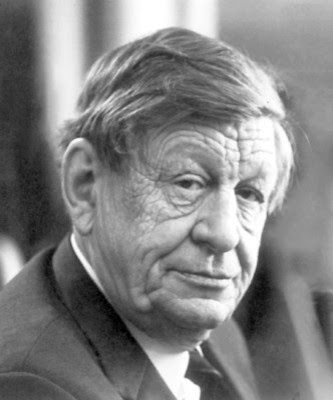 Allen (at Naropa in 1980) continues his survey through a xeroxed classroom anthology of the Sapphic form, paying particular attention today to the late work of W.H.Auden

AG:So from that (from Robert Bridges),  we get into, I think you have the Vernon Watkins and the..

AG: There’s Auden (W.H.Auden), and then from the front, mixed up in the front there’s Vernon Watkins and Louis MacNeice .. had rough Sapphics – (it’s way up front, we don’t need it now). Auden, however, is.. funny. So I think I’ll take two brief Auden Sapphics – “Circe” (page 54 ) – and the next page on the left – “(For) Orlon Fox” – (I’ll be done in a minute, has anybody got to run?). The Sapphic poem was basic to Auden’s practice – and to MacNeice and that whole group of English poets of before the war, the new poets, the modern poets who followed after the great generation of (Ezra) Pound and (T.S.) Eliot . There was Stephen Spender, Wystan Hugh Auden, Louis MacNeice, Christopher Isherwood, and then a younger group, David Gascoyne,Vernon Watkins, Dylan Thomas (younger than Auden, actually). So, Watkins, we have a sample of.

Of Auden, his last book leaned very heavily on Sapphics and very boring statements of boring everyday thoughts (actually, a little bit dumb in that way, except brilliantly written, very witty, but sort of negative). Here, in the introduction (for Orlon Fox) if you’ve got it – the next page – “For Orlon Fox” – “Each year brings new poems of Form and Content,/ new foes to tug with: At Twenty, I tried to/ vex my elders., Past sixty, it’s the young whom/ I hope to bother” – So that’s a little cantankerous, actually – “the young” (very preoccupied with “age-ism”, so..  – and it’s an attack on the young in “Circe” – it’s an attack on the Hippies of the “Sixties

AG: ..On the Hippies of the ‘Sixties  – Well, maybe. On women too, but.. You know the story of Circe in The Odyssey is that she turns men into pigs. You know, because of sheer lust, and she refuses their lust, and they turn into pigs, they slobber and grovel in a swineyard. Meanwhile, Odysseus is not turned into a pig but he enjoys Circe’s bed – “Her Telepathic-Station transmits thought-waves/the second-rate, the bored, the disappointed/and any of us when tired or uneasy/are tuned to receive/ So, tough unlisted in atlas or phone-book/Her Garden is easy to find. In no time/one reaches the gate over which is written/ large: MAKE LOVE NOT WAR” – “large:MAKE LOVE NOT WAR” – If you notice, he’s not paying any attention at all to the rhythm of that hendecasyllable and adonic. It’s all… He’s just counting syllables – Eleven and five.. Eleven, eleven, eleven, and five. And you’ll find that’s mostly.. They’ll either do.. The way that the British, twentieth-century British, are so lax, but are still interesting – they all went to Oxford or Cambridge, and they all studied Greek and Latin, and so they’re all studied, – and they’re all fairies, so they’ve all read Catullus and Sappho. So there are two ways they handle it. One is to have a mixed line that has hendecasyllables that aren’t eleven but ten, thirteen, twelve, sometimes eleven, coming back to eleven, and adonics that are maybe four, five, six (four, five, or six), but not really sharp.

Auden, I think, will, generally, try to stay to eleven and five – “large:MAKE LOVE NOT WAR” is five – “pinks-and-blues-and-reds” – but I.. you know, it reduces the rhythms to “pinks and blues and reds”, da-da, da-da, da – “the rendering, schmaltz”, “splintered main-mast/ of the Ship of Fools”. Why did Auden do that? That was because Marianne Moore, earlier in the century, had decided that because the problem of American rhythm (and English rhythm) is so complicated  and insuperable that (William Carlos) Williams’ idea of trying to pay attention to little cadences of American speech,  (or) (Ezra) Pound’s idea of trying to adapt to approximate classical quantity is just hopelessly self-conscious. So what she said was “I’ll write it as brilliantly, concisely as I can, sticking to the facts, and I’ll just snip the lines off, arbitrarily, according to a fixed count of syllables. So, she fabricated stanza-forms of arbitrary.. say eleven syllables, seven syllables,thirteen syllables, five syllables.. And the next stanza would have to be the same. And there would be a run-on line completely. But there was no interest..not no interest, there was no count, for the verse. There was no count of the cadence, no accounting of the cadence. The angle was to have the strict carpentry of the number of syllables counted (arithmetic-like) and then the rhythms of the speech would run slightly counter to that and syncopate. Auden picked it up from Marianne Moore and does the same thing – he’s just talking like he’s talking – “So, although unlisted in atlas or phone-book/Her Garden is easy to find. In no time/one reaches the gate over which is written large: MAKE LOVE NOT WAR.”- So that the cadences of speech contradict  the artificial snipping of the lines  counting the syllables of the lines just by arithmetic. That has.. If you get to do that, that has a funny ear. If you can develop an ear that way. And other poets that do that – Kenneth Rexroth is one, famously. I do it, as I mentioned, in some early poems

Student; With that kind of stanza would you pause at the end of the line?

AG: No. If you hear Auden, he doesn’t pause, doesn’t pause, but then he can. See, you notice the way John (Burnett) read. It wasn’t very dramatic, but he didn’t pause at all, so you couldn’t tell where one line began and another line ended, as distinct from Ed (Sanders). Now Ed was pausing at the end of each line, which is probably wrong. The way the original would go, I imagine, is that the rhythmic.. that the tones, pitch, tones, melody, the melos, melody, and the length make the rhythm (which was repeated line-by-line so you could hear the variations very clearly, but you didn’t have to pause to know it, see – because they are run-on lines in Greek – just like in Auden and in Marianne Moore). So it’s the run-on of an actual speech that goes on by the breath, and then within that there are the repeated cadences that we’re beginning to get familiar with of   [Allen sounds them out – “da-da, da-da   da-da-da, da-da da – da – da-dum da-da” –  So probably “da-da, da-da,  da,  da-da-da-da  da-da da-da – da da da-da-da, da da, da-da, da-da ,da, da-da-da, da-da, da-da, da-da-da-da-da”] , without a pause for the lines that you’d have to know it because they repeat the surge of the cadence repeat – That make sense?

So the perfect poem would be where the surge of the cadence repeats but where the cadence in itself is a single continuous thing throughout the whole stanza of someone saying something without realizing it’s going to be lines, or without intending a breath-stop for lines. In other words, you wouldn’t know it was poetry, except it has this repeated cadence, wouldn’t know it was poetry by the fact that they stopped at the end of the line, that is to say. That make sense?  That would be the ideal poetry where you wouldn’t have to stop at the end of the line to hear the rhythm, if the rhythm was strong enough.
[returning to Auden] – “Inside…” (inside the gate) – “Inside it is warm and still like a drowsy/September day though the leaves show no sign of/turning. All around one notes the usual/pinks and blues and reds,”/  A shade over-emphasized – (in other words, the day-glo colors) – “..the rose-bushes/have no thorns. An invisible orchestra/plays the Great Masters: the technique is flawless/the rendering, schmaltz./ Of Herself, no sign. But, just as the pilgrim/is starting to wonder, “Have I been hoaxed by/a myth?” He feels her hand in his his and hears Her/murmuring: “At last!”/ With me, mistaught one, you shall learn the answers./What is conscience but a nattering fish-wife,/ the Tree of Knowledge but the splintered main-mast/ of the Ship of Fools?”/Consent, you poor alien, to my arms where/sequence is conquered, division abolished:/soon, soon, in the perfect [Reich-ian] orgasm, you shall, pet,/be one with the All/ She does not brutalize Her victims (beasts could/ bite or bolt). She simplifies them to flowers,/sessile fatalists who don’t mind and only/can talk to themselves – (that’s very much like Chogyam Trungpa‘s view of Cutting Through Spiritual Materialism, you know, poking fun at the…what’s the phrase he uses? the… “idiot compassion” – poking fun at idiot compassion – “you shall, pet,/be one with the All” (there’s that line of Hart Crane – “O answerer of all” – and then he jumped off of the ship and committed suicide!) – “She simplifies them to flowers,/sessile fatalists who don’t mind and only/can talk to themselves/All but a privileged Few, the elite She/guides to Her secret citadel, the Tower/where a laugh is forbidden and DO HARM AS/ THOU WILT  is the Law” – (that must be (Charles) Manson) – “Dear little not-so-innocents, beware of/Old Grandmother Spider; rump her endearments – (turn your ass on her endearments) – “She’s not quite as nice as She looks, nor you quite/as tough as you think.”

Well, that was Auden..  Then finally, (Bob Dylan)  “William Zanzinger killed poor Hattie Carroll”, (“The Lonesome Death of Hattie Carroll”),  which I would… If you look at it you can compare it to the (other texts)..  And on the next page, there’s a little thing on how you can…three different arrangements of hendecasyllables.. and the rest is…you’ll find them.. and (find) ways of getting in and out of it. Alright, I think we’ll move on from the Sapphics…