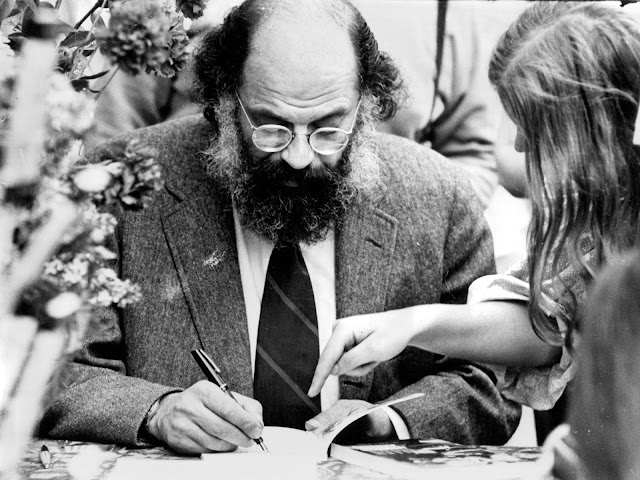 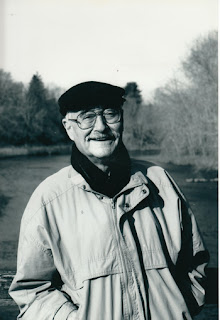 Herschel Silverman New Jersey “Beat” legend passed away last Saturday, aged 89, ” “The Candystore Man“.
Allen immortalized him in his poem, “Television Was A Baby Crawling Toward That Death Chamber” – “candystore emperor Hersch Silverman, dreaming of telling the Truth, but his Karma is selling jellybeans & being kind”

Allen on his poems:
“There is an inventive energy, New Jersey beauty and charm in his compositions . This writing is marked by soulful perception of life around him and language as it falls from his mouth, it includes the complete comedy of his particular obsessions.”

Allen, in 1992, (from his “Homage to Hersch”):
“Herschel Silverman’s memoir of early days [late 1950s] introduction to the New York poetry bohemian beat Lower East Side Village Cedar Bar &  Seven Arts Coffee Shop scene or community is touching – his faithfulness to an idea of art & excitement he projects on others tho’ he half denies it to himself. I’m glad he enjoyed the better part of both worlds, householder, candystore owner in W.C. Williams’ Jersey province as well as active believer & observer & Poet in the now-historic yet still-developing poetic scene in pre-millenial megalopolis America.”

Allen strikes just one down note – but first Silverman and his own recollection:
“Hypnotised by reading Allen’s “Howl & Other Poems” over and over and applying them as Great Poetry Truths, in comparison with most other “modern” poetry taught in schools, I viewed Allen as Holy American Prophet, almost two thousand years in making. seeing him as Yeats’ Creature slowly moving towards Jerusalem to proclaim Second Coming. I was sure that near end of twentieth-century, Allen’s words would be recognized as Herald of New Man, a breakthru in civilization’s march toward Enlightenment. I was seeking a guru through poetry and now I’d found him.” 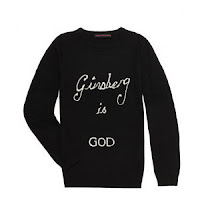 Allen: “He makes too much of me as poetry messiah or macher & I’m a little uncomfortable in that role, either he’s found out my vanity or laid on me a stereotype.
But his sincerity and the pleasure his life’s taken in the poetry world encourages us all to realize that poetry does serve humankind well, in giving pleasure & empowerment to people of sensitive spirit, domestic folk, enlightening their lives and relieving some of the suffering of earthly existence.” 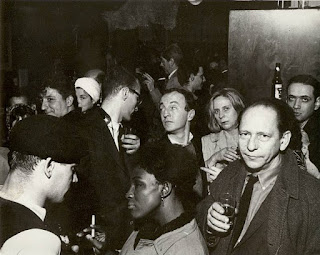 Kianna Carlisle has an interesting project – digitizing the printed poem (no audio, just the words coming up). Here‘s her digitization of a selection from Allen’s Journals made for Ed Sanders’ legendary Fuck You magazine

We particularly like the slow “real-time” unfolding of all this.

Tomorrow, as part of the on-going show (on loan from the Cartoon Art Museum of San Francisco at The Berkeley Public Library (North Branch)), and part of the celebration of Banned Books Week – Eric Drookerand same day, on the East Coast, as part of the Buffalo Humanities Festival, Professor Jonathan Katz will give a lecture entitled “Allen Ginsberg Isn’t Gay” (in the Ketchum Hall in the Burchfield Penney Art Center) – Don’t worry, there’s intentional provocation and irony in that title.

Allen makes it as nude centerfold in the current issue of the St Mark’s Poetry Project Newsletter.

BF: The reason I wanted to talk to you about this [male centerfolds] is that as soon as I got the gig for the newsletter. I knew I wanted a naked centerfold. People thought I was kidding.
EN: What was behind your idea to do that?
BF: I thought it would be funny.
EN: That’s it. See! And how did you come up with that idea?.
BF: Because of the Ginsberg line on the Project website: “The Poetry Project burns like a red-hot coal…” (“The Poetry Project burns like red hot coal in New York’s snow”) I’m interested in exploring the attachment to the past and the impulse to glorifying what used to be at the expense of what’s happening now and the directions the Project has been moving in. There’s a whole world of people who worship at the altar of Ginsberg like nothing else ever happened or ever will happen…

Elinor Nauen notes: “I feel like Allen would want to have a new naked picture of himself taken”.
Meanwhile… 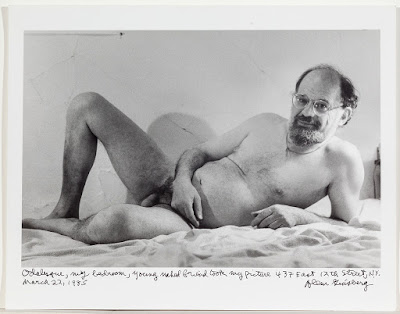