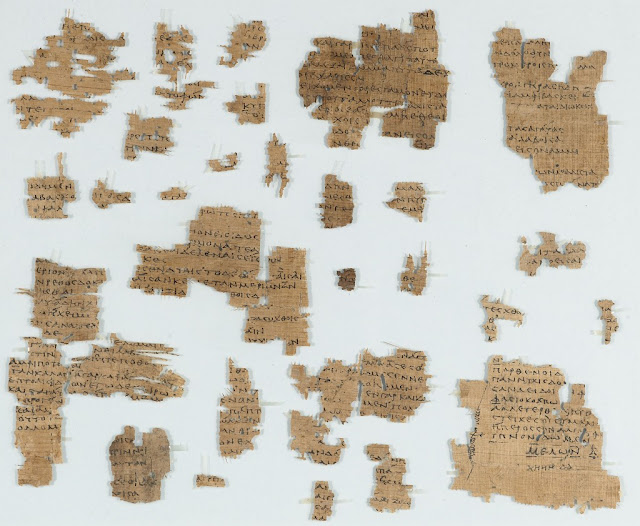 The following is a transcription of a class, given on June 25 1986, at Naropa, by the late much-missed poet-translator, polymath  Anselm Hollo, nominally on “The Greek Anthology” but, more specifically, on the poem as “fragment”. In this first half, he addresses the notion, particularly with reference to Sappho (in Guy Davenport’s translation). In the second half (tomorrow), he gives several instances of where his contemporaries have “used the idea of the fragment or something, done something related to that”

AH:  Okay. To make it seem more like a real class, we’ve got hand-outs, to talk about,  and/or around, tonight  ( – handed an ashtray – wonderful, a Dutch-shoe ashtray! – maybe we should talk about this!)  It’s basically a word, one word – “fragment” F-R-A-G-M-E-N-T ( – turns to the blackboard – I don’t see any way to whiten that blackboard, so I think I’ll leave the prayers on there – we can all use them!) –  “Fragment”,  which comes from (I looked it up in a dictionary).. comes from “frangere” (Latin) – to break. So it’s.. Well, I’ll read you the Oxford English Dictionary definitions of it:

“Fragment – A part broken off or otherwise detatched from the whole, a broken piece, a comparatively small detached portion of anything , a detached, isolated or incomplete part, a comparatively small portion of anything, a part remaining or still preserved when the whole is lost or destroyed, an extant portion of the writing or composition which as a whole is lost, also a portion of a work left uncompleted  by its author (hence a part of any unfinished whole or uncompleted design) – obsolete: applied to a person as a term of contempt  (as in Shakespeare – Troilus and Cressida ‘ (Achilles) – “From whence, Fragment?”)’ –  (I think that should be re-instituted, it’s great..instead of calling people “flakes”, you can can call them fragments!” – “I think she’s rather a fragment!”) – and the other obsolete example is (from) Corinthians Paul’s Letter to the Corinthians]
[Anselm, actually misreads, it’s Coriolanus, Shakespeare’s Coriolanus]
“Go,  get you home, you fragments!” –  (sounds like St. Paul, alright!).

So, “fragment”. I got to thinking about it and I think it’s a word around which you can really hang a whole big cluster of things. First of all, I remembered (that) one of the first literary magazines in Europe, (more specifically, Germany, after World War II)  that.. (well, it was one of the first that really got going as an independent literary magazine,  but also one that first introduced certain American poets to a German-speaking, and possibly even generally European, audience – people like Charles Olson, Robert Creeley I think – it only came out for about two issues but, (featuring) a whole lot of stuff by poets associated with the Black Mountain and Beat movements, was a magazine called Fragmente (Fragments) (and was) edited by Rainer Maria Gerhardt a poet and translator himself.  And I think he took as his motto for the..  mottos for the magazine, the various references in both<(Ezra) Pound and (T.S.) Eliot on the fragmented state of the world after..after World War I . Many of you, probably, are familiar with “Hugh Selwyn Mauberley” and..what’s the other one? (“The Love Song of J. Alfred) Prufrock“..I mean, both of them, there are.. there’s a lot of reference to shards, shattered books, fragments. And I was also reminded of, thinking about.. (having got on this magazine track), that one of the vigorous first rebellious little literary reviews in England after World War I was Wyndam Lewis’s magazine, Blast. And there’s a connection there, obviously. When you have a blast, you have fragments. Then I thought about the wars.. wars of the ‘Sixties, and I thought of the expression “to blow one’s mind”. I also thought about “fragging”, which I gather was a practice.. well, it denoted the practice of  getting rid of unpopular Commanding Officers…

And then I thought about the thing in terms of poetry, finally. And some of the most beautiful and earliest poetry we have in the Western tradition, we have only in fragment(s) – Sappho a great poet of circa the 7th Century BC,Archilechos, who was a little earlier, all the lyric Greek poets, there’s very few whole poems that have come down to us. They’ve come down to us in these bits and pieces, where , a couple..(well, there’s probably more than a couple), there’s maybe about ten poems of Sappho that can be regarded as intact. Well, they were quoted, someone actually quoted them in their entirety, but if you go and look at, say, some critical magazine or book review, book-review-review, today, you’ll rarely find that any critic or reviewer quotes a whole poem. I mean, they quote a couple of lines. So, in a sense, if all books disappeared today that’s all we would have of our contemporary poets, you know. We would have the lines that some more-or-less brilliant critic had happened to quote in his work. And, I mean, the Greek ones weren’t necessarily quoted as poetry, but they were quoted as things said, you know. So, hence, over the years, people confronted with, for instance, the task of translating or presenting Sappho in English, or in any other modern language, were confronted with this problem of having a text in which there was, you know, very large parts missing, very large holes in it. So what do you do? The.. until about the.. (well, this century (the twentieth-century), actually,) the accepted mode for poets or translators trying to do that was for them to fill in the blanks. Like, take a wall, a wall with big holes in it, and just try to sort of.. put the bricks back in, or something. But, I mean, you don’t know what the bricks were, so you make them up, you make new ones. And.. which is very similar, or very parallel, to what happened with the excavations made in the nineteenth-century of great sites of antiquity. Who was that English guy? I remember (Heinrich) Schliemann but Schliemann was the guy who discovered Troy, then there was a great Victorian English person (Sir Arthur Evans) who proceeded to… now this was on Crete, this wasn’t Troy, but, proceeded to build sort of Disneyland additions to the Minoan palaces in Crete which – you know, they were (of) good solid Victorian workmanship, so they’ll be there (and) we won’t be able to read, (or) deconstruct, it, you know.  And I think the one reason that we now have.. for instance, Guy Davenport’s translations of Sappho, which are.. which you have a sample or two in front of you, are.. The reason he is able to be totally honest, in a sense, in that he won’t add anything ,(he leaves the blanks, he leaves the lacunae where they are), is that we have, in this century, I think, early in this century, developed a taste for fragments, and it’s there in all the arts. I think it’s inherited from the Romantics, who, back in the late eighteenth-century loved ruins. Their favorite fragments were ruins, to the extent that in the late seventeen hundreds, people would actually.. people who had big estates, would build ruins, sort of, in their park somewhere, so they had a nice little romantic ruined castle, yeah? – or walls that didn’t go anywhere and crumbled into the ground!  This weird sense of that being… I’m sure, to some people at that time, that must have seemed as weird as punk hairstyles, you know – “How come these people like these ruins?”  “What is this?”, I mean – but, anyway, I think it sort of hearkens back to that, and we’ll.. yeah..I’ll try to talk about why that is, why, why we have this sense of a fragment, possibly, being just as good and, possibly, even maybe better than whatever whole it came from.

So, yeah, looking at the Sappho here, what we have in the fragments sometimes comes out in, as in Fragment #142, comes out in..You know that’s a perfect little poem. I mean, there’s nothing really.. well, we don’t know what we’re missing because it’s not there! but “Those discords,/ I don’t think,/ will reach the sky” – I don’t know, it’s fairly easy to create a context around that. It’s like someone listening to their neighbors arguing or something, something –  “Those discords,/ I don’t think,/ will reach the sky” – or, you know, you supply your own scenario – or Fragment #144 says “Pretty/ Artemis” – Well, that’s probably, that’s probably what’s left of a long hymn to Artemis, you know, possibly, or it’s possibly just a reference to “pretty Artemis” in some text dealing with something totally different, something else – but it’s worth contemplating. And (Fragment) #146, I think is the interesting one on this first spread:

] called you
] filled your mouth with plenty
] girls, fine girls
] lovesong, the keen-toned harp
] an old woman’s flesh
] hair that used to be black
] knees will not hold
] stand like dappled fawns
] but what could I do?
] no longer able to begin again
] rosy armed Dawn
] bearing to the ends of the earth
] nevertheless seized
] the cherished wife
] withering in conmon to all
] may that girl come and be my lover
I have loved all graceful things [    ] and this
Eros has given me beauty and the light of the sun

Yeah, so in what sense, do we miss anything?, you know – We don’t miss anything. I love this poem the way it is. I wish I’d written it! – just the way it is. Yeah? – So there’s something that I think happens in art, in poetry for sure (I can’t speak with any authority for the other arts but..) that a part, a part contains the whole, the little bit..  the way we now think our memory is constructed that way. It’s like, like a hologram.We get hold of one little corner of it and then we can see the whole. So there is a difference, in a way, between that kind of a fragment that gives you the whole and one that is obviously just a splinter, you know, or shard, (or) piece.

(And) I think both.. I’m not saying that the latter is, in any sense, inferior.  Whole aesthetics (have emerged).. I mean what we tend to think of as the Japanese aesthetic, Japanese Buddhist aesthetic, which leaves things out, endlessly, while describing them very well.  I think that relates to the idea of fragments, or fragment, parts standing for the whole.

Let’s look at the.. well, there’s another page, there’s another page of these. Again (Fragment) #151 – God knows is perfect – “To die is evil./The gods think so,/Else they would die”  – That’s really the complete thought.  (Fragment) #153 is a little tantalizing – (“More harmonious than lyres”).  One wishes, one would like to know what is “more harmonious than lyres”?  – “Weaker than water” (Fragment #158), “Whiter than milk” (Fragment #161) – “More harmonious than lyres”, yeah, in a way. You could put these together too. You could rearrange them and make your own poems out of them..which, since, has been done..I mean to move from..to take a fairly radical leap from..(well, actually, it’s not really that radical a leap) –  I mean these may be poems by Sappho but they’re translated by contemporary poets who are right here.

Audio for the above can be heard here, beginning approximately half-a-minute in and concluding at approximately seventeen-and-a-quarter minutes in]