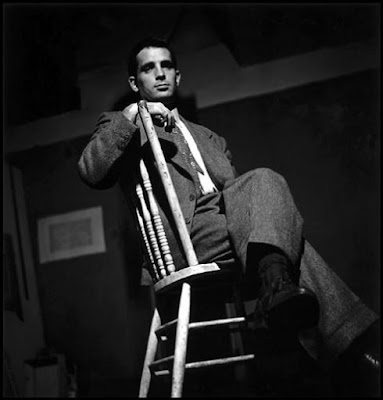 AG: Okay, now, next thing, how do you appply these [30 precepts from Jack Kerouac‘s “Belief & Technique for Modern Prose” ] actually? What is the condition of mind that (you) might apply them? You do it not by thinking about it, but by making your mind blank.
So, now, let us conduct an exercise (because we’ve got a couple of minutes – end this class), writing. What I would like us to do is… for an experiment of writing in the tendency of Kerouac, and in the tendency of classical mind-consciousness awareness, write a three-line poem, consisting in.. (and get your notebooks now – wait a minute, no observers here, get your notebooks out, everybody, nobody can be in this class that does not participate, that means you, come on, that means you with your face behind the red dot [sic], no..no voyeurs around here, come on, – everybody got a notebook?)

Okay, first of all, the way of doing it, a classic way of doing it (which I’ll go into later because we’re going to run out of time soon – what time have we got? three fifteen? – three seventeen, okay – we have another ten minutes, there’s plenty of time) – Flashing  on the immense space of the universe, where we are, waking up in this universe in the space. Step two (that was Step one). Step two – Recognizing the exact place where you are (in this case Glenn Miller Ballroom, University of Colorado, Kerouac Conference, or whatever). So you have the flash of space, undifferentiated space or universe, waking up, coming back to yourself, coming back to yourself, first, the flash, then second, the recognition where you are, the names (the name and the form, the actual distinguishing social characteristic of the scene – auditorium, tables, chairs, Ginsberg, yourselves, whattever you are, microphones, summer (mid-summer, July 24th) – the name and the form, where it is in space (Colorado in the United States on the Planet Earth in the Universe – any way you can locate the flash – you wake up, you’re here, then you figure out where you are or what you’re doing, right? – Are you following so far those two stages of mind? And this is what happens naturally every time you stumble on the stairs, anyway. Third, the after-thought, or, ripple of comment, or what did you think next?, or, coming in in a sort of zig zag, what thought zoomed in from..Mork and Mindy…or from..the hairdresser..   So, in other words, flash of space, recognition of the place, name and form and..   The mind, conceptual mind I’m talking about. Non-conceptual space. Conceptual recognition of it, and then – your personal comment, or your after-thought, a ripple of after-thought. So there are three seperate distinct operations of the mind, that takes place every… probably takes place every… fifty times a second! – You know, like waking up, seeing it’s an OM! AH!  – (to put it very simply in Tibetan stylization – OM! – AH! – HUM! – That’s very precise, actually. It’s a dharmakaya, the vast space, the body of law,  AH! – the recognition – HUM! – the appreciation or manifestation of it – or, Larry Fagin’s phrasing, American-ese phrasing for this was perception-recognition-articulation for space-flash, recognition-name, and after-comment. Now is this clear? I’m dividing our minds, our thought-forms, instant by instant, into three separate stages of development, waking, coming to and seeing where it is and saying “oh yeah, right”. Now is that not like the mind somewhat? Actually this is basic Buddhist psychology, as I think it is also basic Kerouac-ian art style, as, I think, it does parallel to (Charles Olson‘s) “Projective Verse” – “One perception must move instanter onto  another”.  I’m trying to correlate Buddha dharma psychology with Kerouac-ian spontaneous mind bop prosody with traditional open-field poetic form, trying to put all that stuff together in….because it’s only one mind, it’s only our mind. It is our mind that we are talking about and the articulation of our mind.  And I’m breaking it into.. suggesting a traditional break, break-up of the..,  or division, or classification – for working purposes. So you can compose poems on that ground, actually. So, you see, it’s something workable for composing (particularly three-liners – bam-bam-bam, yeah?). So.. the equivalent, the Confucian  equivalent would be – Heaven (Space) – Earth (where we are) – Man (a commenter) – Heaven and Earth and Man – Man (or Poetry) joining Heaven and Earth . The Word (our own Intelligence) recognizing Emptiness and Form simultaneously, recognizing the space and then wakening into the space and recognizing the form and joining them, joining heaven and earth.

So.. now..the method for accomplishing this. What I would suggest is..we’re going to write a poem, in other words. The way to do it really properly is stand up (in a moment, I’ll explain the whole procedure), stand up..with your notebooks (in a moment, I’ll ring a bell or something) and I want the whole cycle. We will be silent for three minutes, letting our minds go empty and blank, not trying to write poetry, instead of trying to write poetry  the opposite (just like I was starting with the bow), bow out, allow the mind a little bit of liberty so that you’re not forced to write anything or think of anything, that you’re not forced to me smart, that you don’t have to be anything at all, you don’t have to think of nothin’ – Three minutes of complete blank, then (you know, eyes open, maybe paying attention to your breath, if you can’t think of any other way of letting your mind go blank, then, we’ll write, for, say, three minutes or four minutes, and then sit down and be quiet for another three minutes, and er.. well, let’s write (we’ll figure what to do with it after, because we’ve only got six minutes to accomplish our creation. So now let us all stand and I’ll give you a signal when three minutes is up. (You don’t have to look at me or anybody, you can look in any direction, it’s just… [There follows a period of silence]

This is a poetry writing workshop so I would like to do some writing in the workshop. The homework for (the) next meeting is five times in the next twenty-four hours, before we meet, when you wake up and return to yourselves, no matter where you are (in the bathroom, out on the street, out on the campus), at least five times, wake up, and come back to yourself, come back to the universe, stand there for three minutes, blanking out your mind, or empty-minded, and then write a three-line poem, reflectuing flash-recognition-after-thought. Do it five times and bring in five poems plus this (the sixth) as homework next time. We’ll do more in class. So it’s a very definite assignment involving operation of the mind, involving awareness, and involving spontaneity. It doesn’t matter if the poems are any good or not. The guidelines are try and keep it to things, you know, not just thoughts, but things, try and be as specific and for-instance-like as possible. In other words, begin training your mind to think in more concrete…think concretely, and the very act of waking up to do this is kind of, like a joining heaven and earth, anyway. So let’s have five poems for the next class. Please, recopy them, five poems plus the one you did now. Try not to change them, try to stick to the originals, because you’ve got more (time), you can do it all your life, I mean, you don’t have to…it doesn’t have to be perfect, it doesn’t even have to be any good, but we’ll have six poems, see if you can…(one now and five more).. see if you can recopy them neatly on a page by the time you get back, so they’re really legible and…because (with) a lot of people here, I would really like to have a chance and go through the poems. I’ll go through them after our class next time  (Maybe we’ll have a chance to recite one each in class, but I promise I will read them if you write them legibly, slowly, carefully, and legibly, so it’s… or print/type them if.. print them, because it’s impossible to read if you don’t, so many poems, if you don’t write really clearly. So be kind to my eyes because I’m really trying to work with the situation. So you’ve got to work too, cooperate there)   Put the three-liners on a page detatched and hand it in and I will grade them or mark them or comment or star what I like and leave them for you in our office before the end of the Conference. So I’ll go to that trouble if you’ll go to the trouble to prepare the texts. And if we get any really good stuff we may use it in some kind of poetry-reading later in the week. So is that a deal? Yeah.

Student: Can you give us an example of the style?

AG: Yeah, well, ok my poem was “On my feet in the ballroom on stage/Is this the teaching of the crazy Chinaman/keep scribbling idiot” – Oh, flash is… The traditional thing is.. (you remember) Kerouac’s “In my medicine cabinet/The winter fly/has died of old age” or “The bottom of my shoes/are clean/from walking in the rain”, or “Sitting on a tree-stump/With half a cup of tea.. “, “Sitting on a tree-stump in the Rocky Mountains/ With half a cup of tea/Nothing to do”, or.. – the haiku form, basically. Flash is “Well here I am in the Glenn Miller ballroom/hung with banners of Tibetan drunkards/Whatever happened to the 1937 jitterbugs?” – You know, where you are, what’s happening, and then whatever flash after-thought comes. Does that make sense? – So what I’m saying is don’t do it all here, We’re all doing the same flash right in this room, but outside. If you’re walking on the campus, great, on the middle of the mountains, or the middle of a crowded street, just stop the traffic and stand there three minutes! – and then write down what flows through your mind as you wake up, you know, after the three minutes are up. So that’s the homework. Is anybody unclear? – and write it out clearly and hand it in – and we meet again tomorrow at two, right? Is that correct? – ok – thank you.  Wait a minute, wait a minute , slow everything down again. Thank you.

[Audio for the above can be heard here, beginning at approximately sixty-nine-and-three-quartes minutes in and concluding at the end of the tape]