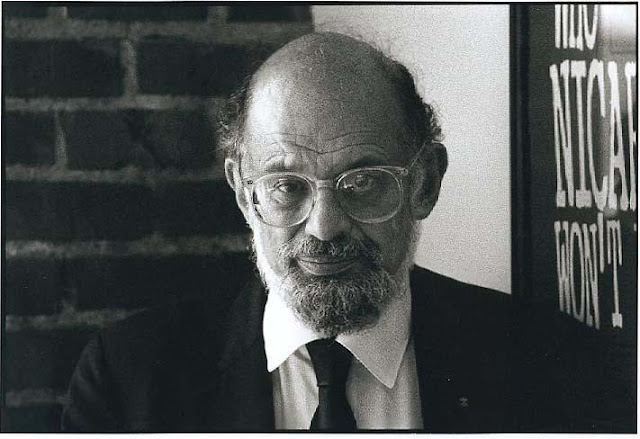 AG: There’s another interesting poet almost as old as (Jack) Kerouac, that was part of the..what was called San Francisco Renaissance – Philip Whalen. Anybody ever heard of him? [a show of hands] – a few – He’s… Now, as you know, there is some interest n Buddhism and Zen – Kerouac’s Dharma Bums – and Philip Whalen was a prototype for Kerouac’s character, [Ben Fagan in Big Sur] Warren Coughlin, in Dharma Bums.

And Whalen now is the Abbot of the Hartford Street Zen Center in San Francisco, meaning that he’s a sensei (or, in Zen, as you get older, they call you roshi, or a Zen master) – and so he’s now the first poet, American poet, first Postmodern Zen master. 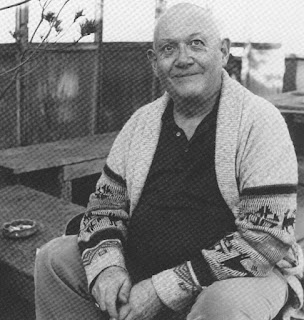 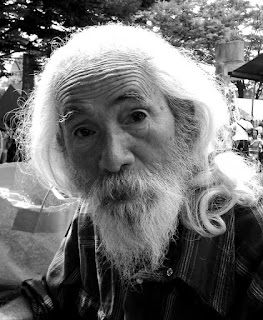 of Gary Snyder, Philip Whalen, and myself, Nanao Sakaki, who writes in English (and is) part of the same generation (that were) born in 1923 – “If you have time…” [Allen begins reading] – I’ll put it in his voice, in his accent [sic] – “If you have time to chatter/Read books/If you have time to read/Walk into mountain, desert and ocean/If you have time to walk/sing songs and dance/Sit quietly, you Happy Lucky Idiot” And here is a poem called “Future Knows” – “Thus I have heard” (That is the beginning of a Buddhist sutra – “Thus I have heard” this, that, or the other – “Thus I heard” – to (a) teacher’s question/) – “Oakland, California – /To teacher’s question/An eleven-year-old girl answered/”The ocean is/ A huge swimmming pool with cement walls”/ On a starry summer night/At a camping ground in Jaoan/A nine-year-old boy from Tokyo complained/ “Ugly, too many stars”/ At a department store in Kyoto/One of my friends bought a beetle/ For his son, seven years old /A few hours later/ The boy brought his dead bug/ to a hardware store, asking/”Change battery, please.” 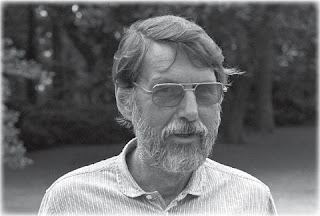 And Robert Creeley – [to Robert Creeley, in the audience] Do you want to read these or should I? – okay, I’ll make a quick selection – “The Operation” (about a marriage difficulty, a couple’s marriage breaking up – “By Saturday I said you would be better on Sunday/ The insistence was a part of a reconciliation./  Your eyes bulged, the grey/light hung on you, you were hideous./ My involvement is just an old habitual relationship/ Cruel.. cruel to describe/what there is no reason to describe” – “The Conspiracy” (this is one of my favorite poems, from 1955-56, when we were all getting together around then..) – “You send me your poems,/I’ll send you mine” – first line – that’s called “The Conspiracy” – ” You send me your poems,/I’ll send you mine./ Things tend to awaken/even through random communication./ Let us suddenly/proclaim spring, And jeer/at the others/all the others./ I will send a picture too/if you will send me one of you” (that’s sort of laconic, but very sweet actually) – “The Lover” – “What should the young/man say, because he is buying/Modess? Should he/ blush or not. Or/ turn coyly, his head, to/one side, as if in/ the exactitude of his emotion he/were not offended? Were/proud?/Of what? To buy/ a thing like that” (so that’s the same Americanese that’s in Kerouac, regular, somebody talking, making his own idiom, spoken idiom). (And) this sort of encompasses all of Walt Whitman (so, “I celebrate myself and sing myself..”) – “Like They Say”– “Underneath the tree on some/soft grass I sat, I / watched two happy/ woodpeckers be dis-/turbed by my presence. And/ why not, I thought to/myself, why/not” – (Do you get it? – that he wasn’t guilty that the woodpeckers were disturbed by his presence, that he was able to sit down in soft grass and…)

So, but then these are (all) early, pretty late, much later, (in the (19)80’s) ,“First Rain” (“These  retroactive small/instances of feeling/ reach out for a common/ ground in the wet/first rain of a faded/ winter. Along the grey/ iced sidewalk revealed/piles of dogshit, papers/ bits of  old clothing , are/the human pledges. call them, “We are here and/have been all the time”/ I walk quickly. The wind/ drives the rain, drenching/ my coat, pants, blurrs/ my glasses, as I pass.”) (So he’s just taking a very simpleawareness of his own presence, and going on to..  (like today’s rain), “blurring your glasses” – “dog shit, papers /bits of old clothing,.. human pledges…”

Later on, “Still Too Young” (“I was talking to older/man on the phone/ who’s saying something/and something are five/ when I think it’s four,/and all I’d hoped for/ is going up in abstract smoke,/and this call is from California/and selling a house, /in fact, two houses,/ is losing me money, more/than I can afford to/and I thought I was winning/but I’m losing again/ but I’m too old to do it again/and still too young to die.”  (What’s interesting to me about this is that it’s almost like he figured out one line, he doesn’t know what’s going to come next, and he figured out another line, and that changes what the first line meant , and then he figured out another.. then another line comes, logicallyy, and that changes everything before that. So it’s like turning a Venetian blind. By the time you get to the end, it’s all locked in, it all makes complete sense. Everything is explained –

(“I was  talking to older/man on the phone..” (it’s called “Still Too Young“) –  “I was talking to older/man on the phone/ who’s saying something/and something are five” (saying something and something are five)  – “when I think it’s four,/and all I’d hoped for” (hoped for) “is going up in abstract smoke /and this call is from California/and selling a house, /in fact, two houses,/ is losing me money, more/than I can afford to/and I thought I was winning/but I’m losing again/ but I’m too old to do it again/and still too young to die.”

And some funny little things in here, little poems, like “Go” – “Push that little/thing up and the/other right down,/It’ll work” (a description of the universe, or sex, or a little toy  “Go” ( I think he’s got children, (he’s got) six kids (so he’s been in this situation, I guess, a lot”) “Push that little/thing up and the/other right down,/It’ll work”  – “Memories” ( “Hello, duck/in yellow/ cloth stuffed from/inside out,/little pillow” (maybe a little something he remembers from childhood or something he got given as a kid)  – “Lovers” (“Remember? as kids/we’d looked in crypt/had we fucked/ we walked a Saturday/in cemetery it/was free the flowers/the lanes we looked/in past the small/barred window into/dark of tomb when/it looked out at us/face we saw white/looking out at us/inside the small/room was it man/who worked there dead/person’s fraught skull?” – (That’s a New England vision! ) I’d like to get on to a couple of little poems of Gregory Corso , the un–well-known as Kerouac is well-known – (Gregory doesn’t get around that much) – “The Last Gangster”

[Allen breaks off – “Who’s the host here? What time does the class begin and end?” – He’s told to “go right ahead” – “Pardon me? No, my question was what time did the class begin and  formally end?. It’s a quarter-to now, so we should end in five minutes right? – is that correct?   (And) if anybody wants to hang around I’ll continue a bit..]

By Corso, one of the early poems, “The Last Gangster” (“Waiting by the window/my feet enwrapped with the dead bootleggers of Chicago/I am the last gangster, safe, at last,/waiting by a bullet-proof window/ I look down the street and know/the two torpedoes from St Louis./ I’ve watched them grow old/…guns rusting in their arthritic hands”) – (and)  “Birthplace Revisited” (“I stand in the dark light in the dark street/and look up at my window, I was born there./The lights are on: other people are moving about./I am with raincoat: cigarette in mouth,/hat over eye/I cross the street and enter the building/The garbage cans haven’t stopped smelling./I walk up the first flight; Dirty Ears/aims a knife at me…/I pump him full of lost watches.”)
A late poem by Corso (that was early, now late), a poem called “The Whole Mess (Almost)” – the whole mess of life, or, everything you want to know about everything important…. – [Allen reads “The Whole Mess (Almost) “] – “I ran up six flights of stairs/to my small furnished room/opened the window/and began throwing out/those things most important in life..”….”…suddenly realized Humor/was all that was left – All that I could do with Humor was to say, “Out the window with the window!”‘ 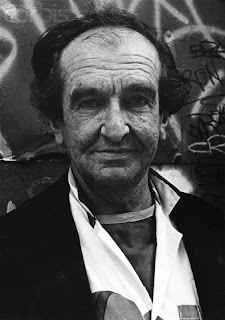 So the last thing I want to read here is from…well, there’s a lot of good stuff here, from John Wieners, a late poem, a kind of interesting.., well, not late but middle-period poem (John Wieners will be reading tonight) – “Children of the Working Class“ (Wieners is a very interesting poet (sort of a poet of love, gay, been, sort of many times sort of frustrated, been in mental hospitals (and out)) And this is the time, 1972, when he was in Taunton State Hospital,written from in there, called “Children of the Working Class”  [Allen reads John Wieners’ “Children of the Working Class” in its entirety] – “gaunt, ugly deformed….”…”…I am witness. not to Whitman’s vision but instead the/poorhouses, the mad city asylums and re-/lief work lines. Yes, I am witness not to/ God’s goodness, but to his better or less scorn”.

It’s a very powerful poem, and very, very much (meaningful)
So, I’m running overtime, but we have (a few moments left)..so, thank you

So I was trying to give you a little brief survey, a range of poems, by various poets, related to the Beat Generation, that you might not get in your anthology (for the course)