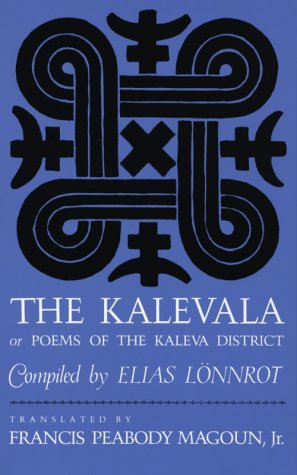 AG: Does anybody know the Finnish epic, “The Kalevala”. Has anybody ever read any of that? – I’d like to read a few pages of that. It’s an epic poem which was originally in oral form, and (was) written down in the nineteenth-century by a Swedish [sic] scholar, Elias Lönnrot, [Editorial note – Lönnrot was actually a Finn] and translated (fantastically) by Francis Peabody Magoun and published by (the) Harvard University Press. It’s called “(The) Kalevala” – K-A-L-E-V-A-L-A, and in the chapter, or poem, three, that I’m going to read from, this old bard, who has had lots of discipline and lots of experience and is an old dog, finally (old dog, incidentally, is one of the characteristics of tantric mind) – old dog, like an old dog that no longer jumps up (and) barks excitedly when it hears an egg drop.

So, Väinämöinen the old dog bard, meets Joukahainen, a young punk bard coming up the road, and their chariots pass (but) can’t pass each other in the road because there’s a too-narrow road, and so comes “a contest of bards” between the older and the younger. They’ve heard of each other, but finally they’re meeting (at least Joukahainen has heard of Väinämöinens
..Steadfast old Väinämöinen lives his days/ on those clearings of Väinämöinen’s district, on the heaths of Kalevala district./ He keeps singing these songs,  keeps singing, goes on practicing his art,/ Day after day he sang,  night after night, he recited/ recollections of ancient time those profound origin songs/ which not all children sing   not all men understand/ in this dreadful time  in this fleeting age/ Far away the news is heard   the tidings spread quickly/ of Väinämöinen’s singing,  of the man’s skill./  The tidings spread quickly to the south,  the news reached the north country./ Joukahainen was a young, a scrawny, Lappish lad./  Once he was gadding about;   he heard that remarkable charms,/ magic songs, were being rattled off,  better ones  intoned/  on those burned-over tracks ofVäinämöinen’s district on the heaths of Kalevala District/ – better than what he himself knew,   had learned from his father/. That he took greatly amiss,  constantly envied/ Väinämöinen being a singer  better than himself..”

So there are a  few verses where he sets out to meet the older guy:
.Steadfast old Väinämöinen,  eternal sage,/ was driving on his way,  covering ground/ on those clearings of Väinämöinen’s district,  the heaths of Kalevala District./ Young Joukahainen came along,  he was driving on the road in the opposite direction./ Shaft caught in shaft,  trace got tangled in trace,/ hames became fast in hames,  shaft-bow in butt of shaft-bow./ Therefore they then stop,   stop deliberate;/ water poured from shaft-bow,     vapor steamed from the shafts.”
As you’ll notice, the formulaic aspect of this is – you make a statement and you modify it, make a statement and you modify it – two halves, one line.

Old Väinämöinen asked:  “Of what clan are you/ to come along foolishly,  recklessly onward./ You break the bent-wood hames,  the sapling shaft-bows./ you splinter my sleigh to pieces, my poor sleigh to bits.”/ Then young Joukahainen/   uttered a word, spoke thus: “I am young Joukahainen/  but name your own clan;/ of what clan are you,  of what crew, miserable creature?”/ . Then steadfast old Väinämöinen   now told his name./ Then he managed to say:  If you are young Joukahainen,/ pull over to the side.  You are younger than I”

Student: When was that written?

AG: Well, the oral tradition is old, maybe two, three, four, centuries.. It was written down mid nineteenth-century, not long ago, (17), perhaps (18)47. Lönnrot went around to Lapland and other places on field trips collecting these tales and has composed them into an epic. Here’s Lönnrot out on his field trip looking for epics (from an 1847 illustration). 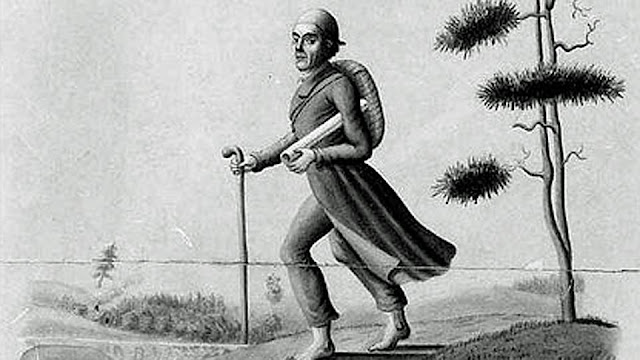 So it’s one assertion, or one, say, magisterial mind.

[Some sections of the above (Allen reading from the Kalevala) can be heard here, beginning at the beginning of the tape and concluding approximately four-and-three-quarter minutes in]