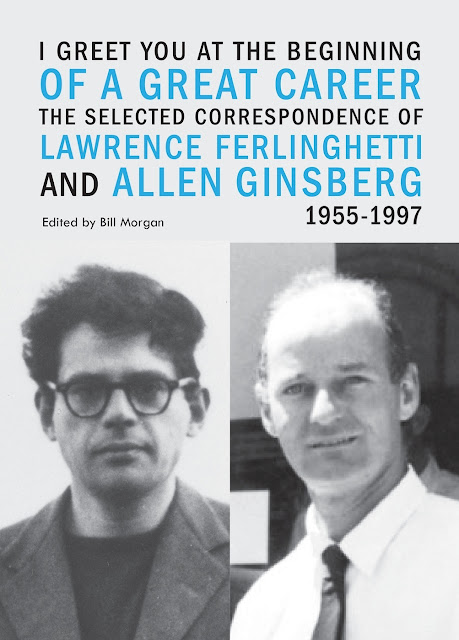 The phrase is, of course, Emerson‘s, writing to congratulate Walt Whitman

“ I greet you at the beginning of a great career, which yet must have had a long foreground somewhere for such a start. I rubbed my eyes a little to see if this sunbeam were no illusion; but the solid sense of the book is a sober certainty. It has the best merits, namely of fortifying and encouraging..”

This greeting was echoed by Lawrence Ferlinghetti after hearing Allen’s legendary Gallery Six reading of “Howl” in October of 1955 – “I GREET YOU AT THE BEGINNING OF A GREAT CAREER [stop] WHEN DO I GET MANUSCRIPT OF “HOWL” [stop] LAWRENCE (FERLINGHETTI) CITY LIGHTS BOOKSTORE.  His telegram (itself, a classic encomium in American Literature), opens this intimate, revealing, “fortifying and encouraging” collection – the (selected) Ginsberg-Ferlinghetti correspondence, edited by Bill Morgan and just published recently by City Lights

From the back-cover blurb:

“In 1969, Allen Ginsberg wrote to his friend, fellow poet and publisher Lawrence Ferlinghetti, “Alas, telephone destroys letters!”. Fortunately, however, by then, the two had already exchanged a treasure trove of personal correspondence, and more than any other documents, their letters – intimate, opinionated, and action-packed  – reveal the true nature of their lifelong friendship and creative relationship. Collected here for the first time, they offer an intimate view into the range of artistic vision and complementary sensibilities that fueled the genius of their literary collaborations. Ferlinghetti and Ginsberg were two of the twentieth century’s most influential literary rebels, and their correspondence documents a time when both were rising in the peak of their notoriety and international fame, traveling, writing, publishing and performing their poetry during a period of unprecedented social and cultural experimentation and upheaval. The majority of the letters collected here  have never before been published, and they span the period from 1955 until Ginsberg’s death in 1997, offering an evocative portrait of an inspiring and enduring relationship.” 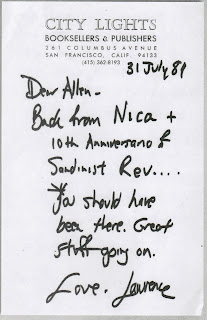 “Dear Allen – Back from Nica + 10th Anniversaro of Sandanist Rev…. You should have been there. Great stuff going on. Love Lawrence”

Ah Sandinistas! – We would do well to look back on that pivotal time in Latin American political and cultural history (and U.S. political and cultural history!). Allen did indeed go down there (making an important visit (captured here in photos by Ilka Hartman) three years earlier, in 1986, and maintaining a consistent and prescient understanding and following of the situation; forthright and outspokenly critical of U.S. hypocrisy and manipulation (this, long before the revelations occured regarding the so-called “Iran-Contra affair“). 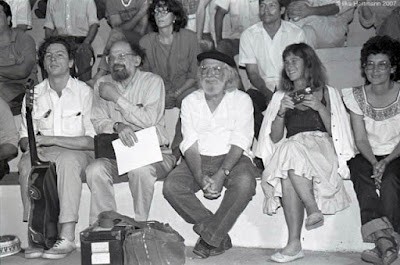 In an early visit (in 1982, at the Managua Poetry Festival), he had penned, alongside Russian poet, Yevgeny Yevtushenko, and the Sandinista’s Minister of Culture, Nicaraguan poet, Ernesto Cardenal, a joint-manifesto(the “Declaration of Three”)  – “to (the) World’s Writers”, an appeal “for (the) Liberty of Nicaragua” – “We are three poets of very different countries…We don’t want to see Nicaragua become a puppet in anyone’s hands. At this moment we are witnesses that here in Nicaragua, which suffered so much under tyranny, misery and ignorance, there is an intent on the part of the people to defend their economic and intellectual independence. Nicaragua is a big experimental workshop for new forms of get-together wherein art plays a primordial role….”

and in “Little Fish Devours The Big Fish”, he expressed his deep and understandable concerns –  “When the troops/get their poop/at Fort Bragg/how to frag/ Sandinistas/ Leftist Nicas/or go bomb/Guatemalan/Indians..”

Here’s another one – from the late ’60’s – “Dear Allen, Dreamt last night you handed me a copy of the VILLAGE VOICE with complete POEM ON THESE STATES in it, about fifty pages of Voice pages. Not a bad idea for a first complete printing of it, I’m even dreaming genius publishing ideas, and it reminds me to tell you that I am ready to do it in Pocket Poets Series whenever you are…”
“The Fall of America: Poems of  These States 1965-1971“ finally appeared in 1973, and garnered for Allen that year the U.S. National Book Award

Also in that letter – ” I am also wondering, what with your new singing career (sic), wouldn’t you like to do a little (William) Blake edition with your music for the poems you have done. It would be lovely; but maybe you want to give the idea to some bigger publisher…” 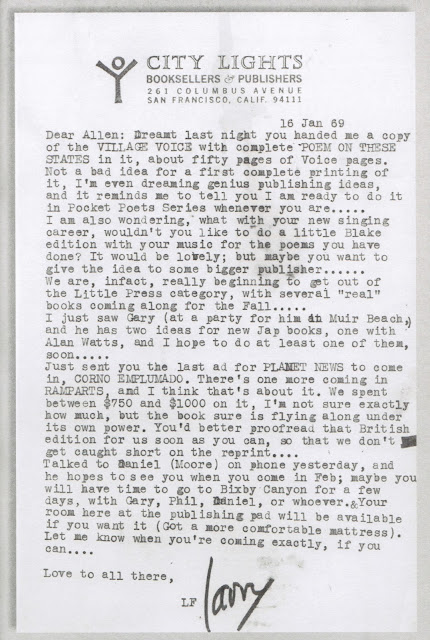 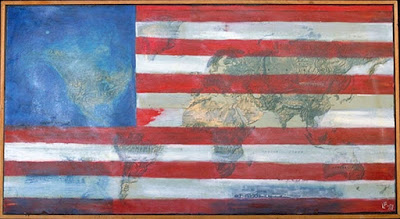 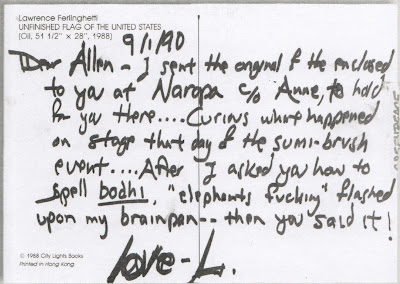 And a postcard from 1990 –  “Dear Allen, I sent the original of the enclosed to you at Naropa ℅ Anne (Waldman) to hold for you there. Curious what happened on stage that day of the sumi-brush event….After I asked you how to spell bodhi, “elephants fucking” flashed upon my brainpan…then you said it! – Love L” 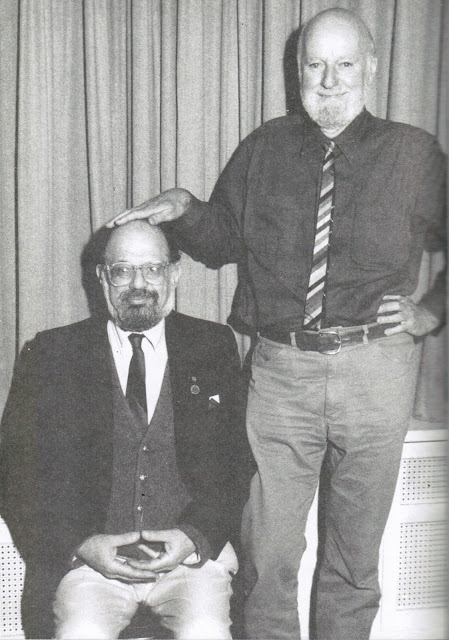 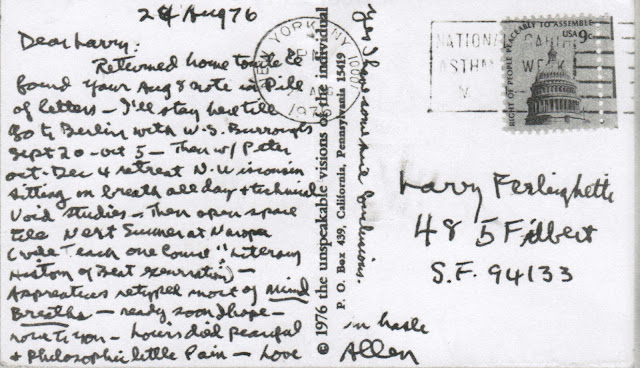 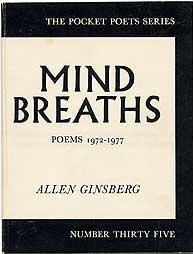 “Dear Larry, Arrived in Moscow with Arthur Miller & Inge (Photographer Wife) and haphazard delegation of scribblers. Frieda Lurie of Writers Union & Yevtushenko at airport hellos – going on to old ghetto city of VILNA for “Discussions” then back to Moscow where I’ll stay two weeks & goof with translators. How was your long Paris summer? Write any poems too?) I’ve been seeing Alex Katz, N.Y.painter, sitting last month for his portrait, also F(rancesco) Clemente. I brought lots of books here from Subterraneans,[distribution company] lots of City Lites [sic] & Grey Fox includimg yr Poetry, Don’t know where I’ll visit but hope to settle down in Moscow and teach & work till December 15 – Love to Nancy (Peters), Philip Lamantia, Folks at store & God – As ever Allen Ginsberg 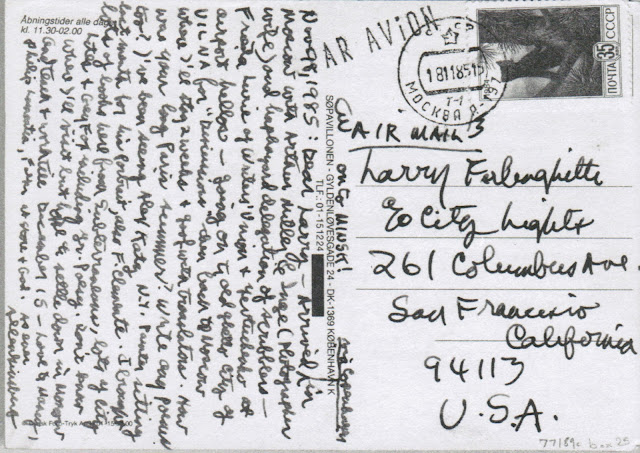 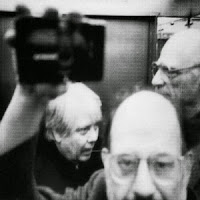 William H Gass, Allen Ginsberg & Arthur Miller in an elevator in St Petersburg in the apartment building where Fyodor Dostoevsky once lived (part of the US delegation to the Soviet Union, 1985

The scattered materials featured above are only a random sampling from an extraordinary trove, expertly edited and shaped by Bill Morgan, in fact summoned into being by him

“Ferlinghetti has always been reluctant to publish his own correspondence, so this volume marks a departure from that previous silence. It was only after repeated coaxing on the part of the editor that he agreed to allow their publication..”

Beat scholars will be forever grateful.