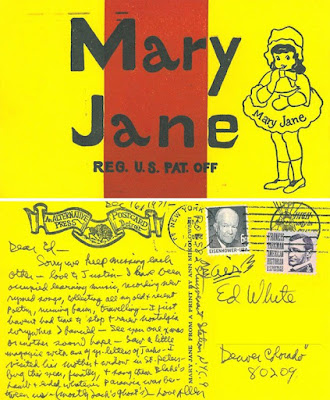 From the interesting collection – Literary Ephemera – 14 Postcards From Popular Authors:

“Dear Ed (White) – Sorry we keep missing each other, love to Justin. I have been occupied learning music, recording new original songs, collecting all my old recent poetry, returning from traveling. I just haven’t had time to stop & renew nostalgia everywhere – fancied – see you one xmas or another soon I hope – Saw a little magazine with one of your letters of Jack [Kerouac]. I visited his mother and widow in St Petersburg this year, [1970] finally, & sang them Blake’s Lamb & ended whatever paranoia was between us – (mostly Jack’s Ghosts) – Love Allen” 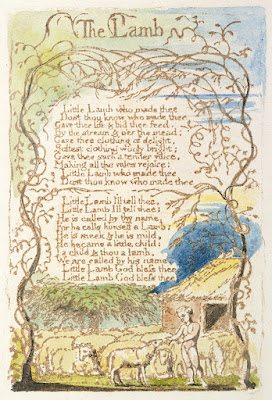 Here’s a pretty rare Ginsberg piece (the cover image is by Alan Aldridge) – “Ginsberg’s famous reading in the basement of Better Books [London], recorded on a Ferrograph by Ian Sommerville. Limited edition of 99 copies (100 stated) – “The reading originated after Ed Sanders provided Ginsberg with Miles‘s name as manager of Better Books, a connection he followed up on his arrival from London from Prague in May 1965. The impromptu reading, though unannounced, was packed (the audience included Donovan, who provided the pre-reading entertainment, and Andy Warhol. Gerard Malanga, and Edie Sedgwick, in town on their way to Rome) and its success provided the catalyst for the Albert Hall reading. Jeff Nuttall later described it as “the first healing wind on a very parched collective mind” 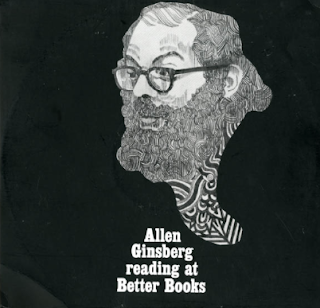 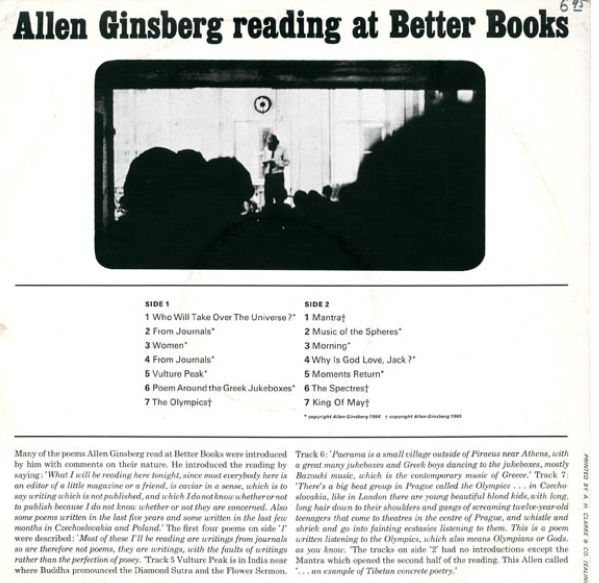 “Many of the poems Allen Ginsberg read at Better Books were introduced by him with comments on their nature. He introduced the reading bt saying, “What I will be reading from tonight since most everybody here is an editor of a little magazine or a friend, is caviar in a sense, which is to say writing that is not published and I do not know whether to publish because I do not know whether or not they are concerned. Also some poems written in the last five years and some months in Czechoslovakia and Poland”. The first four poems on side (one) are described, “Most of these I’ll be reading are writings from journals so are therefore not poems, they are writings, with the faults of writings rather than the perfection of poetry – Track (five) Vulture Peak is in India near where Buddha pronounced the Diamond Sutra and the Flower Sermon. Track (six) Perama is a small village outside of Piraeus near Athens, with a great many jukeboxes and Greek boys dancing to the jukeboxes, mostly Bazuki music which is the contemporary music of Greece. Track (seven) – There’s a big beat group in Prague called The Olympic(s)… in Czechoslovakia, like in London, there are young beautiful blond kids, with long, long hair down to their shoulders and gangs of screaming twelve-year-old teenagers who come to theaters in the centre of Prague, and whistle and shriek and go into fainting ecstasies listening to them. This is a poem written listening to the Olympics, which also means Olympians or Gods, as you know.” The tracks on Side (two) had no introductions except the Mantra which opened the second half of the reading. This Allen called, “…an example of Tibetan concrete poetry””

From The Letters of Allen Ginsberg, the last (remarkable) concluding letter<
to Bill Clinton, April 1, 1997:

“Dear President Clinton,
Enclosed some recent political poems.
I have untreatable liver cancer and have 2-3 months to live.
If you have some sort of award or medal for service in art or poetry, please send one along unless it’s politically inadvisable or inexpedient. I don’t want to bait the right wing for you. Maybe (Newt) Gingrich might or might not mind. But don’t take chances please, you’ve enough on hand.
Best wishes and good luck to you and Ms Hilary and daughter (name)
Home office: # lunchtime noon and 6-7pm supper
Allen Ginsberg”

This, in French translation (as it recently appeared in the French press)

Here’s a selection of  Ginsberg poems in Spanish translation 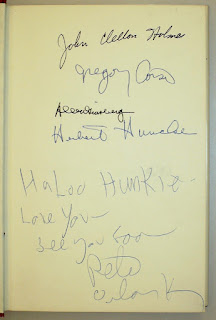 Izzy Young – we noted the trailer for the documentary last week. 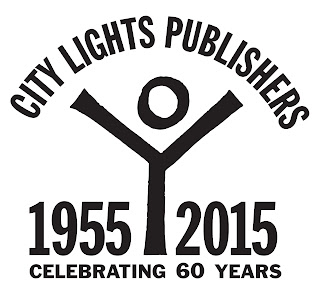 City Lights at 60 – 60 Years of City Lights. Listen, if you haven’t already, to this wonderful KQED podcast