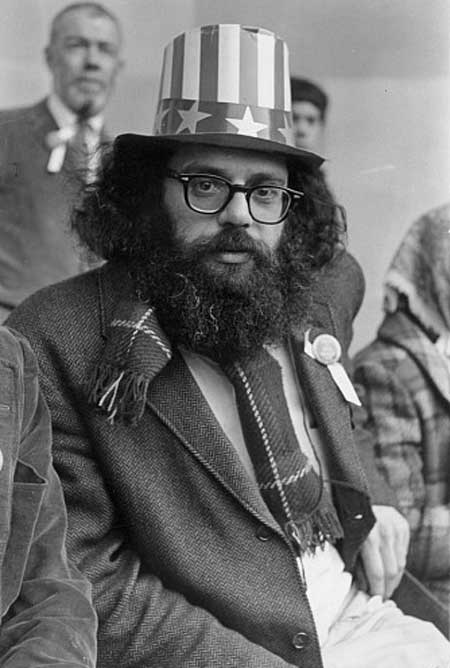 Fred W McDarrah‘s iconic shot of Allen wearing his Uncle Sam hat – (an image that became transformed into a poster, that, at one time, in the ‘Sixties, was ubiquitous, hanging on seemingly every student’s bedroom or dormitory wall).

He (Allen) tells the story (of the events of that day, March 26, 1966)  in the recently re-published National Security Archives interview:

“I remember specifically one time, there’s a very famous photo of me in an American hat an Uncle Sam hat, that was for a march [in New York] that began at Bryant Park, near the Public Library on Forty-Second Street and went all the way up to the Bandshell in Central Park. And although it had been organized by Women Strike For Peace and  The War Resisters League and the Vietnam Veterans, it was invaded by a group of what looked to be extreme left radicals waving Viet Cong flags, getting up in front of the march, getting all the publicity, with all the newspapers collaborating, and then, whn we got to the bandstand, taking over the microphone and not letting the originators and the organizers of the march speak; until after a long long while, an hour of arguing, the police intervened, or the marchers intervened. So the folks who don’t have that historical memory should remember that very important thing: the sabotage of the Government during the political conventions, during the large Be-Ins, during the antiwar marches, the deliberate sabotage of the left, which was more extensive than just on the street: it was like secret  manipulations to discredit and make misinformation camapaigns about them.” 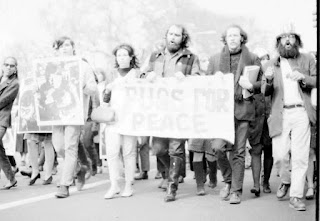 Allen Ginsberg in Uncle Sam Hat (with The Fugs (Ed Sanders et al)  on the 5th Avenue Peace Demonstration to Stop The War in Vietnam, 1966 – Photograph by David Spieler

from the Sotheby’s catalog (at the auction of Allen’s possessions, by the Ginsberg Estate, in 1997, following his death): 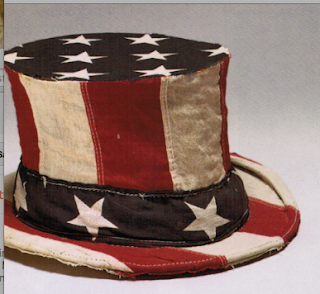 Lot 94: A vintage “Uncle Sam” top hat with label inside printed “Knox Fifth Avenue, New York” and “The Halle Bros Co. Cleveland” Paper “Uncle Sam” top hat – Cotton and velour….Ginsberg did not save the original hat that he wore in the [McDarrah] photo but he received several hats as gifts after the famous photo debuted. Ginsberg was given [this particular] paper hat in the early 1970s and he and friends were photographed wearing it. He kept it on a closet shelf with a label saying, “Allen Ginsberg’s Uncle Sam Hat”. The nicely constructed vintage hat with pieces of the American flag sewn over an old top hat base was used in Ginsberg’s video of  “The Ballad of the Skeletons” filmed by Gus Van Sant. The cotton and velour hat was given to Ginsberg by a young admirer.” 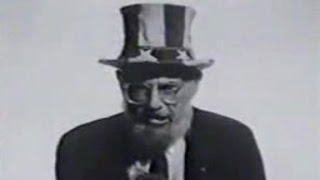 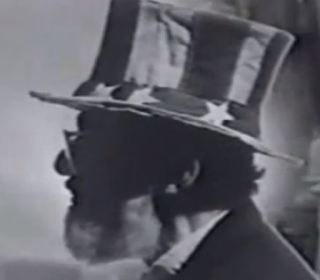 Allen Ginsberg from “The Ballad of The Skeletons” video (1997)” 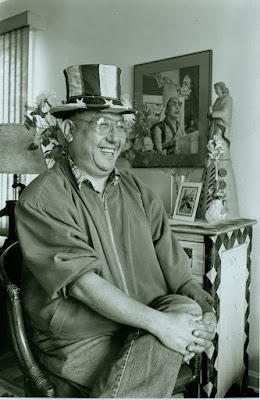 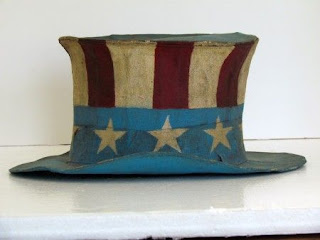 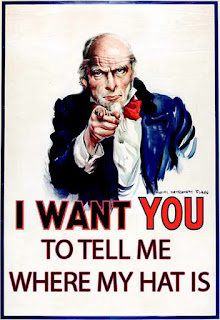 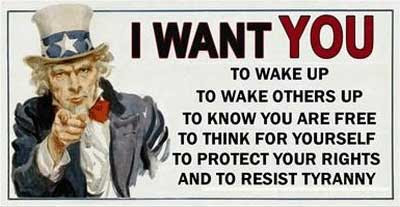