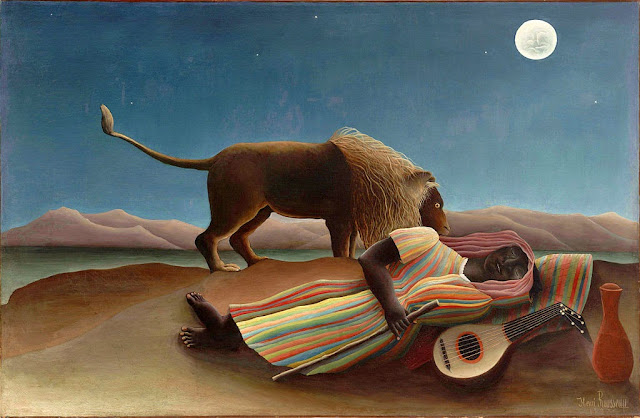 The Sleeping Gypsy (La Bohémienne endormie) (1897) –  by Henri “Douanier” Rousseau – oil on canvas 51″ x 79″ in the collection of the Museum of Modern Art, New York

Student: You expanded on (Jack) Kerouac‘s…

Student: Can you expand on Kerouac’s “If the mind is shapely, the poetry is shapely’? You said…

Student: Right, that’s what I meant.

Student: Can you expand on that – “Mind is shapely, art is shapely”

“If mind is shapely” means (well, actually, we changed it to “Mind is shapely, art is shapely, originally it was “If the mind is shapely, the art will be shapely” – But Kerouac pointed out that mind is shapely – how could it be anything but?). Original mind is shapely, i.e.,  one thought follows another. What do you want? A different thought to follow that one? – He was also suggesting that there is some sort of inner logic to the sequence of thoughts, which there is, actually, if you follow them in this book (Mexico City Blues), for instance, or any succession of pure spontaneous writing. (I’m not talking about day-dream writing or automatic writing, I’m talking about full conscious writing, allowing all the thoughts that come in the window of the eye and ear to be expressed simultaneously)

On this point I had a conversation with (Chogyam) Trungpa (Rinpoche) about a year ago, as to which comes first, thought or word, and he says, that with certain poets and on certain occasions, thought and word are identical. In other words, the words come identical with the thought-forms. They’re the same. There’s no difference between thoughts and words (which is why (William) Burroughs method is interesting, because Burroughs’ thoughts are not in words, Burroughs’ thoughts are pictures. Burroughs’ mind is primarily visual picture – phanopoeia – phanopoeic – visual pictures succeeding one another, which is why his writing is so picturesque, so full of pictures, whereas if you compare it to Kerouac, there’s a lot more pure sound, assonance, and pure sound and verbal play (in Kerouac) – and, “Starspangled Kingdoms bedecked/ in dewy joint -” [17th Chorus] – that’s the first thing –  serif;”>”Starspangled Kingdoms bedecked/ in dewy joint -” – he was allowing that – And then, his comment, “DON”T IGNORE OTHER PARTS OF YOUR MIND” – like “Starspangled Kingdoms bedecked/ in dewy joint -“)

Incidentally, the in-put – there is a lot of Shakespeare(an) sound. And a lot of the book is about his own sound – “(A)ll Picassos/ and Micassos and/Macayos/and/Machados/ and K e r o u a c o’ s” (24th Chorus) – there’s that Canuck “ack-ack“, (the sound Peter (Orlovsky) mentioned before). Kerouac wrote a pure sound poem – [Editorial note – probaby, Allen here is referring to the poem at end of Big Sur] -..arrac’h–arrache–/Kamarc’h Jevac’h” as the quintessence of the French-Canadian mouth. Kerouac  “Kamarc’h Jevac’h“- that sort of funny little “care-oh-ack” – heavy “yack-yack” consonants, with accents on the ends of the  words (which he associated also with bebop – “google-mop” – like long phrasings, ending with an upbeat – “Duh, day-dah-dot, duh, day-dah-dah, be-hoop-be-dope, dee-dope-beep”– from  Charlie Parker, or Dizzy Gillespie. So he was seeing a correlation between the natural sound that the blacks were making in their jazz, his own natural Canuck vocal sound, and what was running through the other parts of his mind.