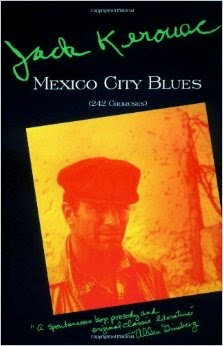 AG: Yeah, so (here) it’s just sort of common sense. It isn’t that much of a mystical mysteriumIt gets reduced. So, simply to say that, (here) items of thought-forms themselves, or dots of thought-forms, or the monads of thought-forms, are built in(to) this triple-ripple (like the “kerplunk  that spreads out, the ring of “kerplunk” in the green pond). It’s just amazing that it could be applied so simply to such an elemental matter as thought. In relation to which, (as) I’ve quoted here, (Philip) Whalen’s statement – “My poetry is a graph of the mind moving”. You know that? – Philip Whalen, the Zen sitting poet? – (from  “Since You Asked Me”) – (“My poetry is a graph of the mind moving”.So he’s speaking about it very literally. Whalen learned a great deal from (Jack) Kerouac and Kerouac’s was, in that sense, a “graph of the mind moving”.

“The discriminating mind..” (the 28thChorus (of Mexico City Blues))Actually, this is pretty good because this describes the same process – three states, or three states of discrimination, or aggressive grasping for advantageous meaning. Actually, a distorted mind, or neurotic mind:

Here he’s talking about poetry itself, people trying too hard to write poetry, people trying to invent a mind, or people trying to invent something smart – “Then comes the Craft Gleam” – the craft gleam, the crafty gleam, the miser-like crafty gleam, trying to get something out of it, something you can keep, like a miser in the cellar with barrels full of herrings and pickles.  So, actually, that’s a pretty good accounting. Actually, when I read that, I thought, “Oh, that’s me. What a horrible description of my thought-processes! That’s the way I go about writing poetry”. Like “Craft Gleams”, to see what’s to advantage. I took this one very personally, but it’s a great one to give to academic poets, actually, A “Craft Gleam”, trying to improve, trying to “achieve/ Greater satisfaction/ Which is already impossible”.  A “greater satisfaction” is already impossible because what is is already so much there that it’s overlooking what is in order to try to improve on what is by your own smart-ass.

I’ll read it again – “The discriminating mind” – that is, in composition, your own smart-ass, in composition of poetry, which is the whole point of what went wrong in what is called academic poetry that, rather than relying on the fresh and absolute facts of the mind, or presentation of the mind, there was some attempt to apply a kind of literary sophistical and sophomoric craftiness, to make it sound better, to please the English professor, or Hudson Review’s editor of poetry. [Allen reads Mexico City Blues – Chorus 28 once again, in its entirety] – “Discrimination”, as you probably know, is a word for discriminating mind, that is to say, from a negative point of view, it can be grasping – discriminating and grasping what you like and trying to reject what you don’t.

Student: Which chorus is that?
AG: Twenty-eighth

Discrimination in Buddhism. There are two kinds – there’s discriminating wisdom, (which is clear-sightedness, so you can see one thing from another – accepting both, but seeing clearly what there is), and then there is (are) discriminations like, “This is mine and this is yours”, or “This is my class-time so don’t you interrupt it by making comments”. So that’s discrimination and that’s neurotic discrimination – the guardianship of territory.

[Allen to Student] Yes, what were you saying?
Student: Nothing
AG: You were waving your hand and moving your mouth in the void?
Student: (I was just saying) something (to my friend here
AG: Oh, talking-behind-my-back? – No fair!

(So), does this process that he’s talking about – of crafty, shrewd, selfishness seem familiar, in terms of your own poetry writing?

Student: (Yes, in other people).

AG: Yeah. It’s really archetypal. This thing in (Jack) Kerouac is really… when I first read it, it really struck me to the heart. He hit archetypal self-thoughts – thoughts about himself and others. It’s just by relaxing and writing what came through his mind he allowed on the page things that ordinarily you’d be ashamed to write about, because it gives yourself away, or others. So it’s really (a) very truthful and clear book, though it seems at first to be very confusing Why, it’s a lot of  gobbledegoook and babble and google and sounds. Yet, through the sounds there come really clear psychological artistic messages. So that, actually, this writing was my bible after I got grounded with William Carlos) Williams. After I was grounded with Williams, after Williams sort of pointed out what in my writing seemed real and grounded and particular and concrete – thing-y (rather than ideational and abstract and generalized and diffuse), then, having had that grounding I began appreciating how particularly grounded Kerouac’s writings were. (Understanding) mind, that was left out by literature in those days. So he’s saying don’t…When he says [in Chorus 17], DON’T IGNORE OTHER PARTS OF YOUR MIND”, he’s talking about that actual mind that we observe in meditation, the ordinary mind – “..I think/And my clever brain sends/ripples of amusement/Through my nerve halls/ And I remember the Zigzag/Original/Mind/ of Babyhood” – (An example – “of Babyhood”) – “when you ‘d let the faces/crack & mick/& yak & change/& go mad utterly/in your night/firstmind/reveries” – “Firstmind reveries”, which leads to (the) Jack Kerouac School of Disembodied Poetics with a basic slogan – Robert) Duncan agreed with Kerouac) on the notion of an original mind, that could be recollected, or spat forth intelligently