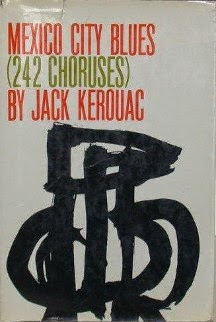 AG: Years ago, I read a lot of (Jack) Kerouac’s Mexico City Blues to (Chogyam) Trungpa , and his comment was, “perfect manifestation of mind”, or “(perfect) exposition of mind”, and, since I had put that on the reading-list [here at Naropa] … this is (I think) a good time to get into it . The reason is, that, for American poetics, Kerouac is about the closest you have to subtle recording of consciousness, subtle recording of ordinary mind consciousness – the kind of quirks, day-dreams, interruptions, abruptnesses, gaps, associations, and after-thoughts that come into American mind-tongue.

Student: On this (past) Saturday, I just read it

AG: Oh, okay. I’d like to read some of them because they make a lot more sense when they’re read aloud. As to whether or not they fit such a scheme [a trikaya, some do, actually, oddly. But I wouldn’t examine them too closely for that. So I’ll read a section from them.

Can you hear clearly, or is there too much noise outside? Is there a problem? Is there a problem with outside noise?
Student: Yes
AG: It might be easier if you moved over to the carpet, maybe, or if you’re too far out in the outfield, move in a little bit.

Student: Could you give the numbers?
AG: Yes. That was…
Student: Third Chorus
AG: Third Chorus. I’ll just read through the ones I like. He had originally said in the Preface, “I want to be considered a jazz poet/ blowing long blues in an afternoon jam/ session on Sunday. I take 242 choruses..”

Can we do anything about that (noise)?
Peter Orlovsky [attending the class]: I spoke with the manager (confidentally, before class).
AG: Okay
Peter Orlovsky: (and I’ll be seeing him again) at six o’clock
AG: Ah, okay (so) there’s nothing we can do about it then.

So, anyway, he wanted “to be considered a jazz poet/ blowing long blues in an afternoon jam/session on Sunday, I take 242 choruses;/ my ideas vary and sometimes roll from/ chorus to chorus or from halfway through/ a chorus to half way into the next”

Student: No smoking?
AG: Yes. Except for the teacher..

On top of a rooftop in Mexico, getting up in the morning and smoking a joint, having a cup of coffee with a little pocket-sized notebook like this [Allen shows the class his notebook] and so the verses are about this size and are printed on the page in the exact arrangement that he wrote them out, probably one or two a morning over a thirty-forty day period. So he winds up with 242 in about two months, as morning’s wake-up meditation recollection exercise

Student: Did he revise very much?

AG: None. Not a bit. Typed up exactly as in notebook with all mistakes (and) flubs (especially the flubs). In the Vajrayana school, flubs, or mistakes, or errors, are considered teachings. If you stumble on something it wakes you up. It’s like going back to the breath. You’re day-dreaming and you don’t see where you’re going and you stumble on something. You wake up. So errors or mishaps are considered the main teaching in this lineage. That’s why Trungpa’s drunk.

– He was listening to sound, actually, as in an earlier prose piece, “Old Angel Midnight”, which is written around this time, which is composed of pure sound, that is Joycean sound-patterns. But the preoccupation is constantly with mind, and what’s going on in mind, or words going through the mind. In Kerouac’s case, not so much, there were definite nodes of thought-perception, but there was also the sort of bebop sound of muttering in the back of the mind that he was hearing, and he refers to it over and over in the book.

If you want to hear his pronunciations, there are some tape-recordings of Kerouac in the Naropa library that you can go check out on cassette – reading some of Mexico City Blues

18th Chorus – (“The bottom of the repository/human mind”…”On carpets of bloody sawdust”) – The message of this book, actually, is the First Noble Truth – Suffering.

Student: Allen? Can you read the numbers?

AG: I’m sorry. Yeah. 17th Chorus was “DON”T IGNORE OTHER PARTS/OF YOUR MIND”, 18th Chorus was (“The bottom of the repository/human mind/ The Kingdom of the Mind,/ The Kingdom has come”…”I’ve had all I can Eat/Revisiting Russet towns/Of long ago/On carpets of bloody sawdust”)
– (Basically, it’s Suffering he’s into)

19th Chorus (“Christ had a dove on his shoulder/- My brother Gerard/Had 2 Doves/And 2 Lambs/Pulling his Milky Chariot/Immersed in fragrant old/spittoon water/He was Baptized by Iron/Priest Saint Jacques/De Fournier in Lowell/Massachusetts/In the Gray Rain Year,/1919/ When Chaplin had Spats/and Dempsey/Drank no whisky by the track..” – I’ll start again, because if I lose it, I can’t keep the rhythmic intention. If there’s a gap, it’s hard to.. (“Christ had a dove on his shoulder..”… “Drank no whisky by the track./My mother saw him in heaven/Riding away, prophesying/ Everything will be alright/Which I have learned now/By Trial & Conviction/In the Court of Awful Glots.”) – I think Kerouac had just had phlebitis, actually. So that was his ”Trial and Conviction/In the Court of Awful (Blood) Clots”), “in the court of awful clots”)